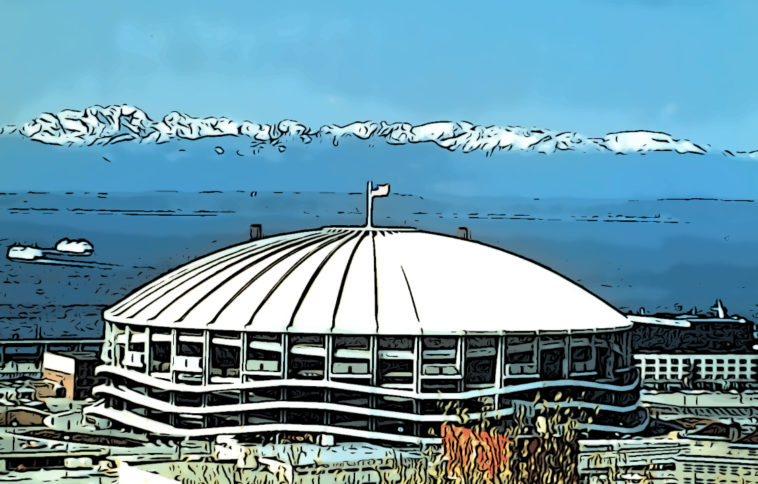 On this day in sports history July 19th, 1994. The Kingdome tiles collapsed forcing a postponement of the game.

Today in sports history July 19th, 1994 the Kingdome tiles collapsed and it caused the game to be postponed. Who else went to the Kingdome for their first ever Mariners game? ??? @sontseattle pic.twitter.com/hrNuPOZrYx

About two hours before the start of a double-header between the Mariners and Orioles, the games are officially postponed before fans can enter the stadium. Four tiles from the ceiling of the Seattle Kingdome had fallen to the stands, leaving officials to declare the site unsafe. The dome, which was considered a technological marvel when it opened in 1976, was built to prevent interference from Seattle’s ubiquitous rain storms. As it turned out, the tiles had fallen to the ground because of the stadium’s bad roofing system, which had taken on too much water.

As each of the Kingdome’s 40,000 tiles were individually replaced, the stadium was temporarily shut down. The M’s played their next 20 games at the road team’s stadium, and might have set the record for the longest road trip had the season not been canceled in August. (For the record, the 1935 A’s, who played 32 consecutive road games, hold the record). Upon hearing that his team’s “home” series with the Red Sox would be played in Boston, Ken Griffey Jr. quipped, “Don’t we have to play in a neutral stadium? How about Tampa? We’ll be there in ’97 anyway.”

The Mariners were already discussing moving the team if a new stadium could not be built, and the tile fiasco made things much worse. It was bad enough to play in an obselete venue, but to play in an arena that was falling apart? Almost a month after the tiles dropped, two workers sandblasting the underside of the tiles fell 250 feet to their death when a crane basket collapsed.

The Seahawks played all their preseason games and three regular season games at Washington’s Husky Stadium. The Mariners very likely would have moved in 1997, when their lease with the city of Seattle expired. However, the following year was a renaissance for the Mariners, who won their division and advanced to the American League Championship Series. The city’s renewed interest in the team prevented the Mariners from moving; by 2000, the M’s were playing in a newly-built Safeco Field, while the Seahawks moved to Qwest Field in 2002.

Tampa Bay was given an expansion team in 1995. In 2000, the Kingdome was demolished to make room for Qwest Field. It became the first dome stadium to be imploded and was the first live event ever broadcasted on ESPN Classic.
110
SHARES
Share On FacebookShare On Twitter
Subscribe
[mc4wp_form id="8903"]