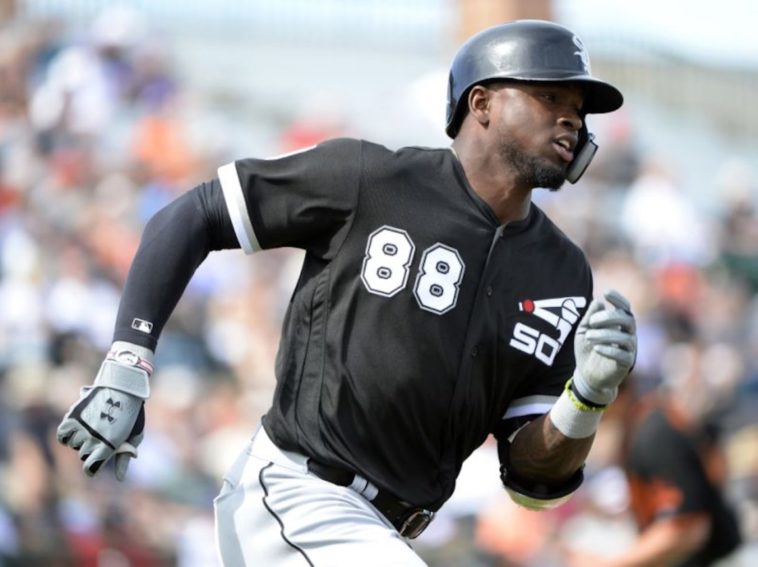 So far through White Sox Summer Camp, Luis Robert has been the talk of the town, for obvious reasons. Initially, there should always be buzz around a top 3 prospect in the sport who signed an $88 million contract before taking a swing at the big league level.

But the performance has to match, and that’s where the Luis Robert mythology has really taken off. I could talk about the ease with which he patrols centerfield here, but that’s boring.

The people want dingers, and Luis Robert has provided them in all shapes and sizes, be it falling down after sitting on offspeed and having to adjust to an inside fastball…

Luis Robert hit a homer while falling down ? pic.twitter.com/uIlknin5e9

Then there was last night’s scrimmage, where Robert hit consecutive missiles off of two established pitchers in Kelvin Herrera, a two time MLB All Star, and Steve Cishek, who hasn’t had an ERA with a first digit of higher than 2 in 5 seasons.

I mean, if you can almost put a ball onto the Fundamentals Deck, there really isn’t a lot else to discuss about where the power tool is at.

Luis Robert hit another home run AND it hit the last row.

Say it with us: MERCY! pic.twitter.com/vFNcH2U2R9

What Luis Robert’s dominance means for the White Sox pitching staff is a blog for another time and a topic which may have a much scarier reality for the 2020 White Sox, so that will not be discussed here.

What I’m here to discuss, as the title implies, is my thoughts on what a realistic 2020 season looks like for Luis Robert. Taking away the hype and as much of the homerism as I can, what will we see out of the phenom in this 60 game season?

While all signs point to Luis Robert having an excellent career, assuming he stays healthy and can adjust to big league pitching over the long haul, having a 60 game season to launch his career is certainly a unique situation. It really does seem to set him up for a boom or bust season, and almost makes you wish he had some big league experience from last season. If only he didn’t have to stay in Charlotte to work on his defense!

He's making it look easy out there. Luis Robert with some stellar defense to take away a hit. @WSDashBaseball @whitesox
?https://t.co/lHPSOm8dKe pic.twitter.com/QtVUz7vl0y

I’ll start off by looking at the various projection models that are out on Robert for the 2020 season, which you can see below.

They are all fairly consistent in considering Robert an about league average hitter over the course of a 50 game season, a safe bet for a guy with no big league experience. The projection of a 7-9 home run season would translate to 18-24 homers in a full season, but it still leaves something to be desired given all the talk we have heard about Robert’s power over the last year.

Defense is a bit trickier given the lesser measuring tools in the minors, but given Robert’s athleticism, range, and instincts in centerfield, I’m not worried about his defense. As long as he’s healthy, it will be above average. Hitting is where success or failure will be defined, ultimately.

Of course, projections are based on real data, and looking at Robert’s career minor league numbers you can see where these came from.

Perhaps the two things driving down the projections from what many fans are hoping to see is the extremely low walk rate (even at 5.5%, this would have been good for 17th lowest in MLB last season), and a high strikeout rate (25% would have put him bottom top 30 in baseball last year). While the power is certainly there, as well as speed and exit velocity that should give him a higher than average BABIP, the plate approach will likely be what defines Robert’s 2020 season.

That’s not to say you need a great walk rate or strikeout rate to succeed at the big league level. Look no further than Robert’s own teammates. Tim Anderson walked 2.9% of the time last year and won a batting title, and Yoan Moncada had a 5.7 fWAR season in 2019 even while striking out at a 27.5% clip.

This is where Robert’s 2020 will hang in the balance – can he hit consistently over a 60 game period, his first taste of major league pitching, to maintain a solid average/on base percentage? Can he hit with strong enough contact to buoy the at bats that end in a strikeout?

The projections seem to think so, at least to the level of being an average major league hitter right off the jump. While this seems like a let down given the hype, let’s not forget the ups and downs (aka hovering around league average) Yoan Moncada went through before breaking out in 2019.

The biggest concern for Robert, having never seen major league pitching, will be if he can handle the jump in talent and approach. While his performance in Summer Camp indicates he’s not lost, how he will fare day in and day out against pitchers with wider arsenals of pitches at their disposal is yet to be seen. What seems to be clear though, is that he can feast on mistake pitches.

So, this is where the boom or bust comes into play – will he go the route of Yoan Moncada, or could we see a 2013 Yasiel Puig style supernova start to his career? Can he use his aggressive approach to be on the attack against opposing pitching who has never faced him before, or will big league pitching take time to adjust to?

If I had to make a prediction, I’d say it’s going to be somewhere in the middle. I don’t envision an MVP type season, given the circumstances. I also know that saying a rookie is not going to win an MVP is not exactly a bold statement. The hype is all there, but we have to consider the track record, and the fact that minor league dominance doesn’t immediately translate to big league stardom.

A rookie of the year is certainly in the cards, and others seem to share that view.

With that being said, a slightly above league average season offensively with plus defense in centerfield to anchor between Nomar Mazara and Eloy Jimenez is really what this team needs. The lineup has firepower, which will give Robert time to develop. His job on this team will not be to carry the freight, but to be someone who can add even more offense to a dangerous group.

I hate to go on the eye test too, but in my heart of hearts I truly believe he is going to be a special player and be on the boom side of the boom-bust spectrum in 2020. I’ve seen too much ridiculousness on video to not buy-in. Mythology is a huge part of baseball, perhaps more so than other sports, and Robert checks that box with his performance over the last year plus.

While maybe not the superstar we want to see right off the bat, put me down for a .275-ish average, 10 steals, a 110 wRC+, and 8-10 dingers. While the concerns of the alternative have to be considered, I will take that type of production to the bank for 2020, and then be ready to see what he can grow into over the next several seasons.