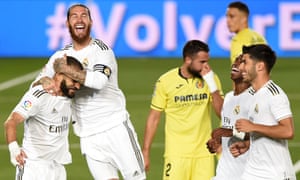 Real Madrid are champions of La Liga! Madrid sealed their Championship season with a 2-1 win over Villarreal.  Although Madrid got the win, which ensured the title, they would have won the league regardless due to the pathetic Barcelona loss today.  Benzema was once again the primary contributor on the offensive end.  The team played like true champions and it was a great performance to cap off the season.

Another strong performance from Courtois.  Made a great string of saves in the final minutes to finish the game off.

Not as aggressive today, but was solid defensively.  Mendy will be part of the Madrid back line for a long time.  .

Ramos is a true leader with ferocious will to win.  He played well defensively and busted forward to earn the penalty in the second half.

Had to deal with a skilled attack and did so brilliantly.

Carvajal was involved in the attack all night.  He had a few good runs into the box and a nice shot on goal.

Per usual Casemiro, was all over the pitch all night.  Perhaps most key was his interception that led to the first goal.

A phenomenal performance from this wonderful player.  Modric was the best player on the field all night.  He controlled the midfield and drove the team forward.  He played amazing passes downfield to Carvajal, Hazard, and Benzema.  He had a great shot on goal from 35 yards out that challenged the goalkeeper.  Savor every moment this man is on the pitch.

Did well to control the game and had a fantastic attempt on goal that hit the crossbar.  Oh so close to going in.

Hazard does well on the ball but cant seem to exert influence into the team.  He is still figuring out a way to mesh with the team.  Furthermore, opponents are always all over him and foul him constantly.  Hazard will improve next year, especially if he stays healthy.

Rodrygo continues to get better.  He is quick and talented.  As he grows older and stronger, he is going to turn into a world class player.

What a great way to win the league.  2 goals for Benzema, who is in striking distance of top goalscorer in La Liga.