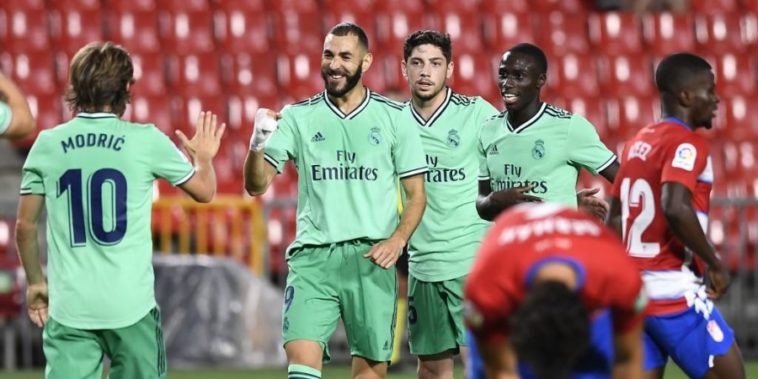 Real Madrid inched closer to the La Liga crown with a 2-1 victory over Granada.  Real dominated most of the first half, and looked like a top class outfit.  Real scored twice in quick succession within the first 25 minutes.  Ferland Mendy scored his first Real Madrid goal with a stunning smash from a tough angle.  Minutes later, Benzema scored a classy curled finish from the left side of the box.  The second half was a much different story. Granada had multiple chances throughout the half and could have scored two or three goals.  It was Courtois who saved the day with multiple key saves, along with Sergio Ramos who provided a goal line clearance in the final minutes.  It was certainly a long half to watch for Madrid fans, but they ultimately earned the three points.  If Madrid wins on Friday against Villareal, they will win the league.

Will be a little irked to have let the Grandada goal go through his legs and lose his chance at another clean sheet.  Regardless, he made multiple great saves to keep Madrid in the lead.  He is the best keeper in the world right now.

A near MOTM performance from Mendy.  He is starting to peak into world class form.  Mendy scored the opening goal, with a scorching run into the box and a screaming goal from a tough angle.

Huge performance from Ramos.  If Madrid can win the title, fans will not soon forget the vital clearance that Ramos provided in this game.

Varane was under threat for the entire second half.  Per usual, he dealt with the speed and threats very well.

After missing the last game, Carvajal was much needed asset to have back in the squad.

Played well for much of the game, but he did give up the ball that led to the first goal.

Another wonderful performance, as Modric continues to turn back time and play at an extremely high level.  He has been one of the biggest benefactors of the covid break.

Kroos did not exert as much influence as in recent games.

Valverde appears to be in a funk.  Perhaps he needs a goal to bring back his confidence.  Either way, we have not seen the levels he brought in the first half of the season.

Isco played a number of great balls and passes throughout the first half.  He is getting better, but this rating is relative to the high level we have come to expect from Isco.

Classy performance from the Frenchman.  He continues to impress with phenomenal performances.  Benzema is going on 10+ years of this kind of world class play.  This is a memorable season for Benzema, which can hopefully be capped off with a La Liga crown.