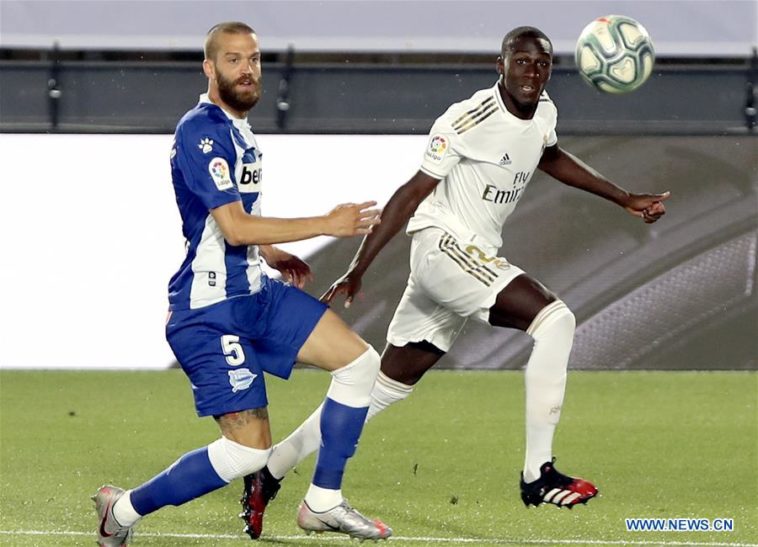 Real Madrid continued their unbeaten run by defeating Alavés 2-0.  Madrid are now 4 points clear of Barcelona with 3 games to go in the season. Alavés hit the crossbar in the third minute, and forced a few more saves from Courtois during the course of the game.  Overall though, Madrid dominated possession and were solid defensively.  Mendy was great all night and earned the penalty that led to the Benzema score.  Later on, Benzema unselfishly fed Marco Asensio to put Madrid up by 2.  Madrid’s deep bench is simply too much for most teams to handle.  The Madrid defense was solid…even the makeshift group that was out there this match.  Madrid’s next match is against  Granada on Monday.  The Whites can clinch the league with a win and a Barcelona tie or loss.

I am running out of good things to say about the Belgian.  Best keeper in the world right now.

Phenomenal performance…Mendy was everywhere.  His run earned the penalty to give his team the first half lead.  He made a number of other threatening runs throughout the game.  His pace is electric, and his defensive abilities are second to none.  Perhaps the best defensive LB in the world.  He is superb and just getting started at Madrid.

Solid game for the backup CB.  Made some impressive interceptions.  Playing well and showing he can link with both Varane and Ramos.  The bar is high for Militao, but he is showing the potential to eventual become the full time starter.

What a player.  Another fantastic performance.  So solid.  Proud to see Varane wearing the captain’s armband in the latter stages of the match.

Vasquez did just enough filling in for Carvajal.  It would be interesting to see this player at another club and see what he can contribute, but the Spaniard seems content in his current role.

Another solid game per usual.  A  defensive rock.

He continues to play at a superior level.  It is almost unfair to see some of the opposing players try and defend Modric.  His skill is unmatched and his ability to move the ball forward is sublime.  Another performance to savor from the Croatian man.

Passing ability is unreal.  He had a decent shot go just over the bar.  Great game from Kroos, particularly in helping move the team into the final third.

Better than last game for Rodrygo.  He still needs to develop physically, but that will come with time.  It is amazing that he is playing at this level in his teens.  He is improving with his decision making and seems to mesh well with the squad.  I like the faith that Zidane shows in him.

Another electric game from Asensio.  If Asensio remains healthy, he should be starting  ahead of the young Brazilians.  Scored the second goal, which was an easy tap in courtesy of Benzema.

Benzema is vital to this Madrid attacking team.  He is involved in nearly every buildup sequence and attack.  He was recently (and deservingly) named La Liga player of the month.  His showing in this game once again confirmed his vital qualities to the squad.