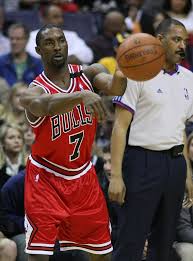 Welcome back to another installment of Forgotten Heroes. Previously, we’ve paid homage to a couple of Chicago sports legends, Hunter Hillenmeyer and Nomar Garciaparra. Today, we’ll set our sights on the United Center and fondly remember Bulls icon Ben Gordon.

Chicago Bulls basketball found itself at a very serious low point after Michael Jordan left in 1998 and the more core components of the team fall apart. From 1998 to 2004, the Bulls never won more than 30 games in a season. That all turned around when Ben Gordon, the British born son of Jamaican immigrants, was drafted 3rd overall by the Bulls in the 2004 NBA Draft. Gordon had played for 3 years in college at UConn, winning a national championship in 2004 and averaging 20.5 pts / 4.7 rebounds / 4.5 assists in his final year as a junior. Upon being drafted to the Bulls, Ben Gordon helped lead the Bulls to a 4th seed in the playoffs, the first post-season appearance for the Bulls in the post-Jordan era. Averaging 15.1 pts / 2.6 rebounds / 1.9 assists per game as a rookie, Ben Gordon was a very bright spot in an otherwise dim Bulls franchise. Gordon was the first rookie in NBA history to be awarded the NBA Sixth Man Award and was voted to the NBA All-Rookie First Team.

From 2005-2008, Ben Gordon made a name for himself as a real deep ball threat and a great partner to Luol Deng in the back court. Gordon did, however, continue to struggle with turnovers. He was 6th in the league in turnovers in 2004-2005 4.46 per 48 min. But what he lacked in ball control, he made up for in scoring, shooting nearly 46% and averaging 21.4 pts in his third season. Ultimately, the Bulls would go on to draft Derrick Rose in 2008, which lead to serious questions about the roles that Deng, Gordon, and now Rose would play, as all 3 were aggressive scorers. After several heart-breaking playoff runs, Ben Gordon would end up being traded to the Detroit Pistons, where he would continue to hurt teams from beyond the three point line.

Ben Gordon’s Chicago career is remembered fondly, as he was a lion on the court at a time when Chicago Bulls basketball was nearly irrelevant (not unlike today). A true competitor and an incredibly teammate, Ben Gordon also passed Scottie Pippen in 2008 for the most 3 pointers in Bulls history and now sits at 2nd in franchise history behind Kirk Hinrich.

So here’s to you, Ben Gordon! The ultimate role player and utility weapon that brought the post-Jordan/pre-Rose Bulls back to playing competitive basketball.