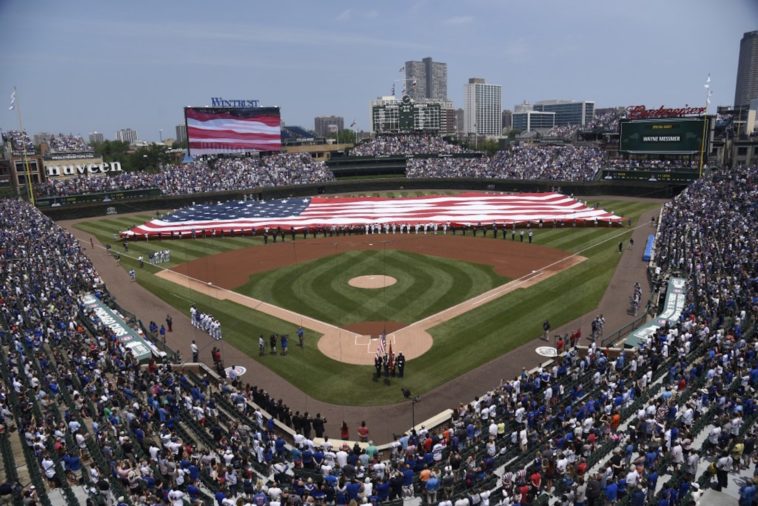 The Fourth of July has always been a mid-summer marker, an extra day off to help celebrate the Independence of our nation 244 years ago.  Whether you celebrate it by taking a day to relax and taking in some fireworks, by screaming MERICA!!!! at the top of your lungs after your 20-something odd Natty light of the day, or somewhere in between, it’s always been a day to do with how you want.  Yesterday was no different.

For me, and many others, baseball has always been a huge part of the Fourth of July.  Whether it was being at one of the several White Sox game I’ve been at on this day, watching on TV at a barbecue with my family, or sweating through 14 shirts in 100+ degree weather at Busch Stadium a few years back, there has always been baseball during the Fourth.

The connection of baseball and the Fourth of July is a central fabric of American culture, going beyond just my personal experiences.  From backyard wiffleball games to Major League games, baseball and the Fourth go together like apple pie and Chevrolet, or something like that.  Hell, anyone whose seen the Sandlot can attest to that.

With no other sports on the calendar in a usual year (besides the Nathan’s Hot Dog Eating Contest, of course), the national pastime has been king on Independence Day.  That was, until yesterday, when Major League Baseball games were not played on the Fourth of July for just the second time since six years after the end of the American Civil War.

Since 1871, we’ve gone from not having flight to putting people in space, we’ve had two World Wars, 27 different American presidents, and the automobile has gone from a luxury of the extreme rich to a staple of Americana.  I could go on, but that’s besides the point.  With all that has changed in the world, baseball on Independence Day has been a constant, no matter the circumstances.

I stumbled upon James Earl Jones’ “People will come speech” from Field of Dreams yesterday, and one part of that really rang more true than ever.

This one hits a little different today. Happy Fourth to everyone on this wonderful website #HappyFourthOfJuly https://t.co/0cXlwfVoNK

Given that baseball is a game that has linked friends and families going all the way back to the days of the Civil War, there really is no other constant like it in marking the time of America.  Darth Vader is spot on here.

So, experiencing an Independence Day without the National Pastime just seemed…well, like it was missing something.  It’s completely understandable why there wasn’t baseball yesterday – in the face of the COVID-19 pandemic, any baseball that can be played safely will be a Godsend.  I’m still of the thought that it is extremely unlikely we see the end of the 2020 MLB season given the recent surges in cases in the US, coupled with disregard for precautions seen throughout the country.

The point of this blog post isn’t to rue a labor strike as the reason we didn’t have baseball yesterday – the main reason was and will be the pandemic.  Rather, this is to give my thoughts on what not having baseball meant.

It’s also not to say this year’s Fourth of July was bad.  Whether it was in the afternoon when I enjoyed the company of my family at a small barbecue or later in the evening watching the fireworks being lit off at the end of my block, the day was still a great one.  Again, it was just missing something – and no, not the official fireworks, a got more than my fill of fireworks filling the sky past midnight.

Having baseball on the Fourth is something that I had just taken for granted, one of those things you don’t really realize how the absence will feel, until it’s suddenly not there.  I was originally going to put this blog up yesterday, but the more I tried to write the more I realized I needed to have the perspective of experiencing a Fourth without the game I love as a backdrop to the festivities to truly get it.

The things I missed most were evident, both from years I’ve been at games and been at home.

The smell of hot dogs, polishes, brats, and grilled onions that blasts you immediately upon walking into Guaranteed Rate Field.  The sound of a crowd who all chose to spend their Independence Day in the exact same way, baking in the sun to watch a game for a few hours.  Driving home down the Stevenson and seeing the night sky being lit up by fireworks from every direction.  Being at a cookout and catching a glimpse of some random Pirates-Marlins game that’s on to escape the heat for a few minutes.  Talking with my family, sitting outside with a beer as day turns to twilight and hearing Ed Farmer’s voice on the radio calling a game.  Complaining about a 6th inning bullpen move Ricky or Robin or Ozzie made that day to fill the evening conversation.  Arguing with the Cubs side of the family about God knows what in an endless cycle of us telling the other side our team is better and theirs is garbage.

When it really boils down to it, not having baseball left a void in the day, covering all things big and small.  Actual activities from being at games all the way to simple aspects of grabbing food or conversation in a day with family and friends.  Despite being without sports for over 3 months now, not having baseball spoke louder than ever yesterday.

Baseball has been, for generations, an escape from everyday life.  There’s a reason it’s been referred to as the national pastime for so long.  Parents teaching their kids the game, playing catch in the backyard and coaching little league.  Going to major league or minor league games across the country, taking in the sights and scenes from the park no matter where you’re at.  Arguing about who the best player ever is, from Ty Cobb to Babe Ruth to Mickey Mantle to Hank Aaron to Barry Bonds to Mike Trout.

Despite all that has changed in the world and our nation, baseball has remained relatively the same.  There’s no activity or cultural phenomenon that quite bridges the ages in America like baseball.

In that way, the effect of its absence on the Fourth of July makes perfect sense.  It was a reminder of all that has changed in the world, both in regards to the virus and otherwise.  Instead of being a constant that was always there, always painting the backdrop to the day, its absence was a reminder of what we have always had and taken for granted, and was no longer there.

While baseball will undoubtedly be back in the near future, I’ll remember this Fourth of July for the eery emptiness it had without the game.  It’s always funny how when a constant is gone you realize all the little ways it intersected with your life.  When baseball returns, I’ll make sure to soak in every second of it.