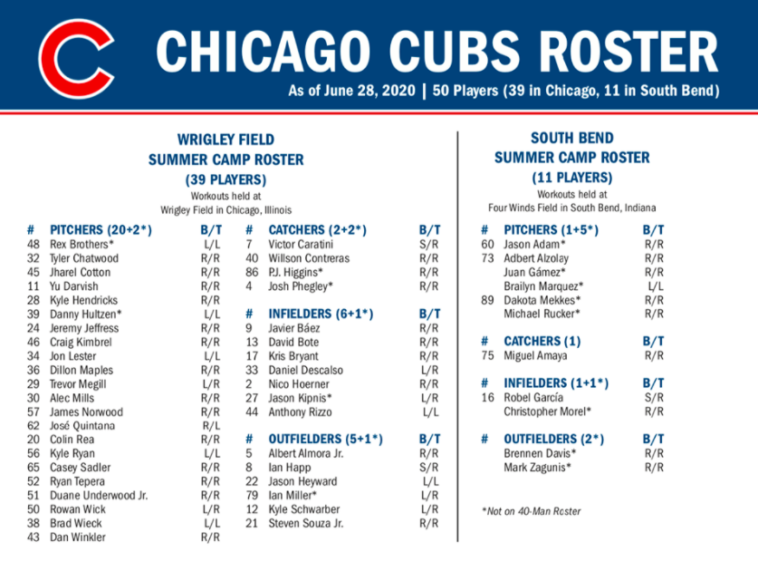 Since the MLB season is starting soon, teams are submitting their summer camp roster which includes the MLB team and the minor league team. The Chicago Cubs have 39 players on the “Wrigley Field” roster and 11 going to South Bend. It was easy to expect some surprises, and the Cubs definitely have some, but I didn’t expect to be this excited to see some young prospects finally getting to show off their talent.

Outfielder Brennen Davis and left handed pitcher Brailyn Marquez were included on the summer camp roster and will be part of the South Bend squad available to be called up. Davis is ranked 3rd on the Cubs 2020 prospect rankings with Marquez right in front of him at 2nd. in 177 AB’s, Davis batted .305 with a .381 OBP. Marquez also had a good year last year. He had a 3.13 ERA in 103.2 IP and 128 strike outs. There is a lot to like with these two prospects and and as of right now, the sky is the limit.

The Cubs also added Miguel Amaya to their South Bend roster. He is their 4th ranked prospect and is sitting behind Willson Contreras and Victor Caratini for the future catcher spot. Amaya wasn’t himself at the Arizona Fall League batting just .224, but will look to turn it around this year to get back on track. Considering there were two more catchers added to the roster (P.J. Higgins and Josh Phegley), there is a small chance Amaya sees a Major League field this year.

I was a little surprised Robel Garcia was left off the Major League roster. Yes, he did bat .208 last year with a .275 OBP, but he started off the year extremely hot. By his 10th game, he was hitting .333 BA with 3 home runs and a .370 OBP. Maybe he is just a streaky player to begin with, but if he catches fire this year, there’s a good chance he will be here to stay.