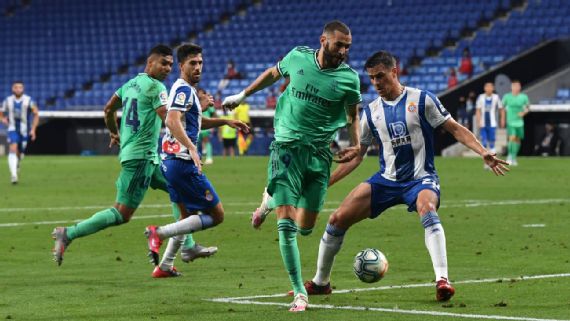 Real Madrid defeated Espanyol 1-0 to take sole possession of first place in La Liga  Madrid dominated the game throughout, although they will be displeased to have kept the game so tight.  Zidane decided to sit Vinicius and gave Isco his first start of the 2nd half of the season.  There was a lot of pretty passing and possession, although this Madrid lineup seemed to lack the attacking flair that Vinicius has provided lately.  Overall, a huge result for los blancos, who took advantage of the Barcelona loss to go 2 points clear of their rivals.  Madrid have now scored 11 goals and surrendered only 2 in their first 5 games back.  Barca have two tough games upcoming against Athletico and Villarreal, which could see them drop more points.  The next week is poised to be pivotal in the title race.  Madrid are off until Thursday, when they will host Getafe.

Another game, another clean sheet.  100% confidence behind the keeper, who is performing like the best in the world.

Always creating down his left hand side, although nothing magnificent to note from the Brazilian today.  Had to deal with a lot of speed and pressure on his side of the field, and did fairly well.

As consistent as ever.  The Frenchman is phenomenal.

Played well for most of the night, although he did find himself out of position a few times in the first half.

You can never doubt the man’s work rate.  Not as effective tonight going forward tonight or with balls into the box.  His achilles was on the receiving end of a horror tackle that hopefully does not see him miss time.

Starting after missing the last game due to suspension.  Casemiro was Madrid’s strongest player going forward all night.  He had multiple attempts on goal during the first half, and was able to turn in Benzema’s scrumptious assist for the lone goal.  Was as stellar as ever in defense.  Well deserved MOTM performance tonight.

Valverde is yet to match his performances of before the covid break.  Although he did not have a meaningful impact on the game today offensively, he did provide some great passes going forward.  From what I have seen, he will eventually get back to his top form.

Kroos’ passing is unmatched against any player in the world.  His calmness and decision making on the ball is superb.  Vital to Madrid’s offensive progressions during the games.

Hazard is graceful with the ball at his feet.  He moves well, and makes good decisions.  Unfortunately, this is not translating to having a meaningful impact in the final third.  You hope he will continue to improve his form and be the player we know he can be.  Hazard was fouled the entire game, with multiple cynical tackles committed against him.  You can only hope he can remain free from injury, which is key to see him continue to develop.

First start since the break for the Spaniard.  Like Hazard, showed great skill while on the ball, but failed to have an impact on the final third.  Hopefully he continues to get starting minutes to get back to top form.

Provided a phenomenal assist to Casemiro for Madrid’s goal.  It was meticulous awareness and precision by big Benz.  One of the best players in the world right now at any club.  He is cementing a status as a true Madrid legend.