Thank god UFC is a weekly ordeal. Just like that, we are back with another great card that is LIVE and FREE on ESPN. Starting at 5 pm, The Mothership will be presenting 10 fights, all culminating with the 5-round main event between Dustin “The Diamond” Poirier and “The Hangman” Dan Hooker. What a great fight it’s shaping to be!!

Dan Hooker is in the middle of the greatest run of his career, currently on a 3-fight win streak that includes wins against the likes of Al Iaquinta and Paul Felder. If he can get a win against Poirier, he will be in about as good of a spot as you can be without being the champion. Hangman Hooker actually was quoted recently saying that if he can secure this win against “The Diamond” then he’d be in a position where everyone else would have to do the calling out.

Dan Hooker is quite the polarizing character in the MMA community. Clearly an exciting talent to watch, but has gotten plenty of flack for his antics on Twitter. Whether it’s the shit-talking or blocking those who talk shit to him. There are plenty of fans out there who want to see Hooker get his ass kicked.

Poirier on the other hand has just got to be plain pissed off. After coming off a tough loss to Khabib in which plenty of people think it was a close fight before Poirier got caught in a choke. Dustin is the favorite in this fight, coming in at -220 so it will most definitely be an interesting fight to watch. 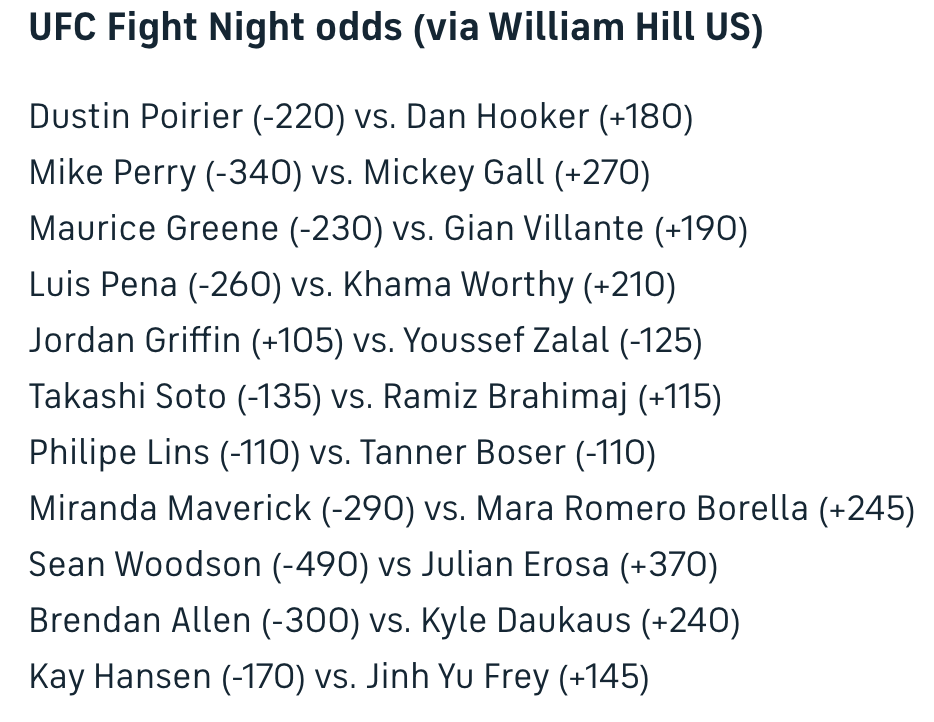 Let’s take a look at a few other fights before we pick the main event. The first fight I want to take a look at is a Heavyweight bout between Philipe Lins and Tanner Boser. This fight is currently a pick-em with both fighters coming in at -110.

Give me the guy who has shown me more in the octagon and not the dude who just lost a decision to 41-year-old Andrei Arlovski.

Brendan Allen has proven before just how dangerous he is in the octagon. The 25-ft Cage will be a huge advantage for him. Allen takes on the undefeated upstart in Daukaus and although he has not lost yet, Allen will be the toughest test he’s faced.

This is a tough fight to pick, two top guys. But let me go with my gut. Give me Poirier, give me the sure thing. Hangman sure has some great value, but I think at the end of the day you have to go with the better fighter and in this case, it is Poirier.

Should be an awesome card, follow along on Twitter at @SONTChicago for all of our picks tomorrow night!