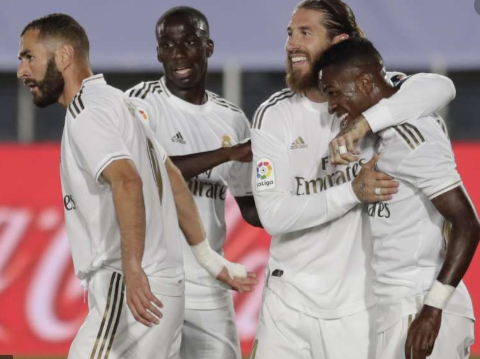 Real Madrid once again answered rivals Barcelona by beating Mallorca 2-0 to regain the top spot in La Liga.  Benzema and Bale both tested Mallorca’s keeper early, and the first impression was that Mallorca was in for a long night.  Vinicius Jr. put the hosts ahead and Sergio Ramos scored a fantastic free kick in the second half.  Courtois  came up with a few good saves, but Mallorca never threw anything heavy towards the Madrid defense.  Overall, a very easy game for Madrid.  It was also good to see Isco get back into the mix with some minutes in the end.  Madrid’s next match is against Espanyol on Sunday.

Mendy is a fantastic defensive player.  As the season has progressed, he continues to improve offensively.  He is a great provider to the speedy Vinicius down the left side.

The best defender in the world, who also is a consistent offensive contributor.  Scored a fantastic free kick from the top of the box.

Another strong game.  Continues to provide strong defense and contributes great service into the box.

Luka is world class, but we are used to it by now.  Provided the assist to Vini on the first goal.  Another solid showing from the Croatian.

Valverde was asked to play a holding role, which is not his strong point.  Tonight is proof of how important Casemiro and Kroos are to the squad.  Fede needs the defensive backup so he can drive forward, which is when he is at his best.

This game is showed that Hazard and Vinicius can coexist.  With Vinicius streaking down the left side, and Hazard roaming through the middle, there is potential for something special this season and for seasons to come.

A second straight MOTM for Vini.  He continues to get better and grow in confidence.  It is quite remarkable that the Brazilian is only 19.  His pace is so elite, and it gives something totally new to this Madrid squad. He is becoming a must start.

One early shot that tested the keeper.  You have to feel bad for Bale.  He does not get enough time to really get back to his best.  You know the talent is there, and he puts in effort, but he simply does not mesh well with the team.  I have no issue with leaving him on the bench, and it does not seem that he minds too much either.  If you are not going to consistently play him, then you are going to keep getting performances like this.

Benzema offers so much to the team.  His passing, his movement, and his shots on goal.  Tested the keeper early, and offered good linkup play throughout.