Anyone who played baseball or softball growing up has gnawed on more than their fair share of Big League Chew. The stringy, flavor-packed gum flies off concession stand shelves at little leagues across the nation. Mention Big League Chew to a former (or current) ballplayer and get ready for a sly smile and ready yourself to ride their wave of nostalgia.

My favorite flavor was Ground Ball Grape. I dabbled in Big Rally Blue Raspberry and Outta Here Original from time to time, but I held a particular disdain for Swingin’ Sour Apple. I was mindlessly watching instagram stories recently when I came across former Creighton basketball star Justin Patton wearing a pair of lime green sandals that caught my attention.

I couldn’t believe my eyes. I’d recognize the Big League Chew lettering anywhere, and there the Swingin’ Sour Apple mascot was, grimacing at me through my phone screen.

After gagging at the thought of my least favorite flavor, I immediately sprung into action. A quick google search along the lines of ‘big league chew flip flops’ made my jaw drop. There it was: a New Balance link.

I wore New Balances before doing so was cool. WAY before.

Disclaimer: I am not claiming to be a hipster, I was just a wayward child with zero fashion sense.

I loved wearing New Balances growing up, in large part due to the fact that I was convinced that the N also stood for the first letter of my last name. I didn’t care that I was wearing shoes designed for uncles at a family barbecue, the unbelievable comfort and the all-important block N were enough to keep a young me coming back for more.

Needless to say, the present-day New Balance & Big League Chew partnership is the greatest thing since sliced bread as far as I’m concerned. I absolutely had to have a pair (or four) of those sneakers or slides.

Unfortunately, I was too late to the game. I had my sights set on the Ground Ball Grape running shoes, but my heart sunk when I found out my size was sold out. The dread only intensified as I clicked through each of the flavors/options – even Swingin’ Sour Apple. Still no dice. I’d need to cast a wider net. Unfortunately, none were available in the range from a half size too small to a half size too big, either.

“Nothing hurt.” I muttered, lying to myself.

The sandals were what I came for, anyways. As it turns out, they were all sold out in my size as well. Downtrodden, I stared blankly into the void for a bit longer than would be considered socially acceptable. Then, an idea popped into my head.

I’d go a size-and-a-half up in women’s! “They’re slides, nobody is going to be able to tell the difference,” I thought. I figuratively patted myself on the back to congratulate my ingenuity, input my NB Rewards code to score a sizable discount, and checked out. I hadn’t invested in a new pair of slides since my freshman year of college, and I was lucky enough to score a pair featuring two of my all-time favorite brands! I couldn’t believe my luck.

After about a week, I came home from work to see a package with a giant NB had arrived at my door. I gave a completely unnecessary fist-pump, wiped it down just to be safe, and tore it open like a kid on Christmas. The shoe box is phenomenal. I admired it for a few seconds before slowly opening it to reveal my long-overdue replacement sandals…

…then I started cackling like the idiot I am. Here’s why. 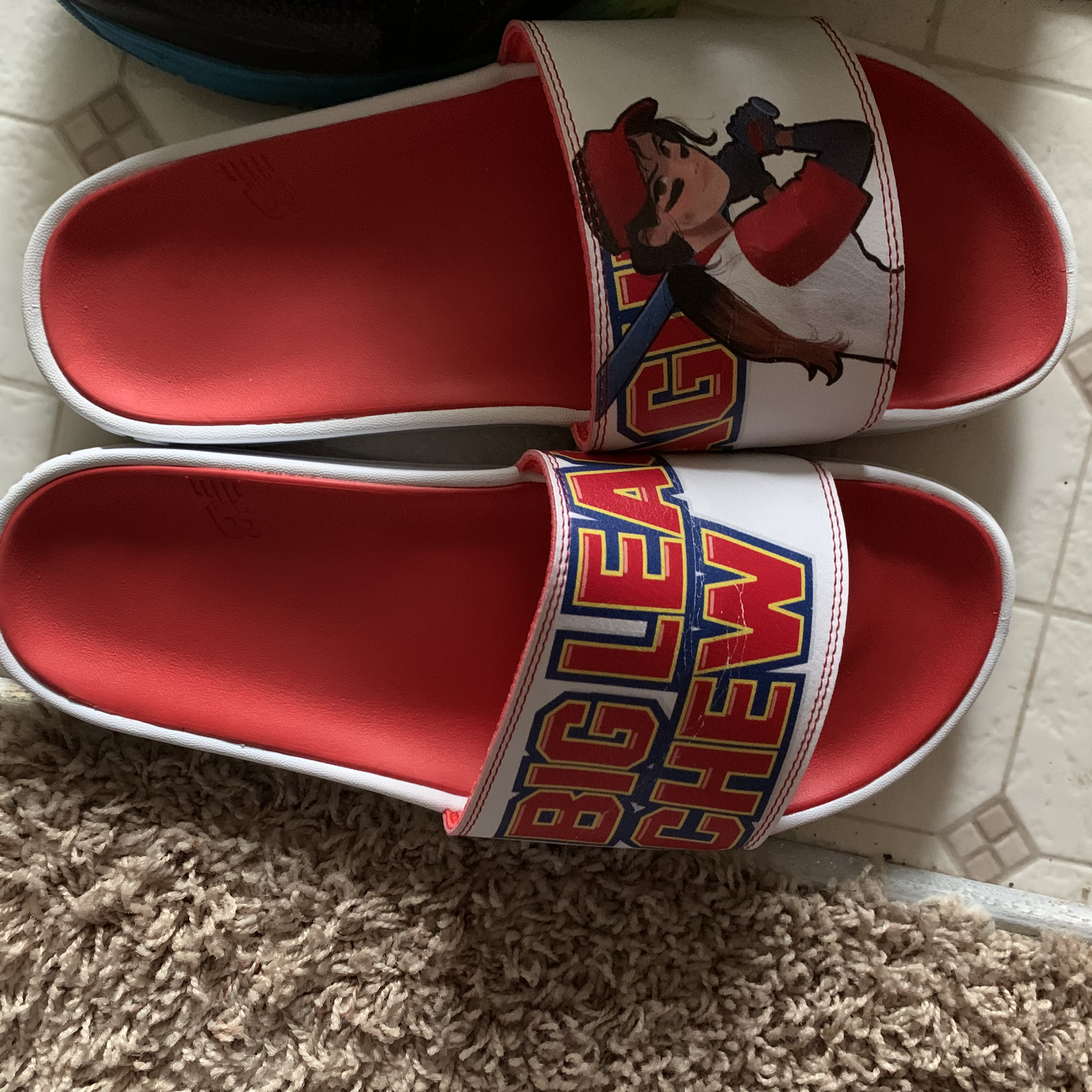 I was so blinded by nostalgic impulses that it hadn’t occurred to me that ordering women’s sandals might mean that Big League Chew’s female mascot might, ya know, be on there. As has long been the case with me, comfort wins out over style yet again.

I turned 25 last week. That’s the commonly agreed-upon age at which male brains are supposed to be fully-developed. Evidently, that’s not the case with me.