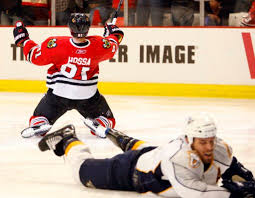 He’s a first ballot Hall of Famer at that. What can anyone say, the guy deserves it. He’s one of the best two way forwards the NHL has seen, was drafted 12th overall in 1997, 3 time Stanley Cup winner (keep the change), and finished his career with 1,134 points in 1,309 games. I could go on and on about his play and other things, I didn’t even mention he’s an Olympian too… I remember when the Hawks got him back in 2009-2010, I was stoked. The year before he had made it his bread and butter to kill the Hawks, especially in the playoffs. I also remember how he had lost the two years prior in the Cup finals, something that must have been heart breaking for him. However, it made his win with the Hawks that much sweeter. The Hawks broke a long Cup drought and for Hossa, it was “third time’s the charm.” There are so many things that I remember Hossa for, his first goals as a Hawk, his wild OT winner in game 5 vs the Preds in 2010, and one time I even got to meet him. It was December of 2012, the NHL was locked out and we weren’t sure if the NHL was coming back that year. Hossa, along with a bunch of other Hawks/NHLers were skating at my hometown rink in Oak Park, IL. My dad, sis, and I went to go watch them and at the end we got a bunch of pictures and autographs. Hossa made it a point to stop and actually talk to me, a 19 year old kid at the time with stars in his eyes. I asked him how he was doing (he had hurt his shoulder and had a concussion the past season) and told him I hoped they would come back and play and I told him I hoped he was feeling healthy. He said “Thanks man! I feel much more better now!” For whatever reason I will always remember exactly what he said. Hossa had this effect on many kids my age and just hockey fans in general. The way he played was so amazing, from his slap shots on shootouts, to the way he back checked, to his goal celebrations. He was one of those generational talents that came from a county that has some great talent but isn’t a hotbed for hockey like say Canada, USA, Sweden, etc. I wish he was still playing, and if it wasn’t for a rare skin disease he probably would be. I miss ya in a Hawks uniform Big Hoss, but what you’ve done on and off the ice is tremendous. Cheers to you for achieving something that very few NHLers can say they’ve done.