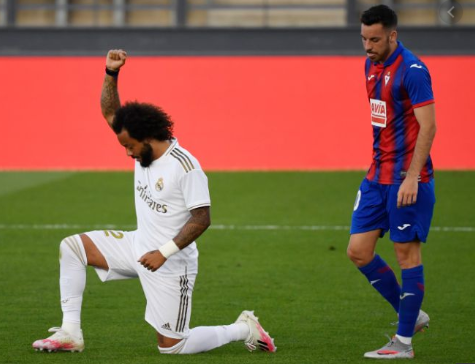 Real Madrid earned a 3-1 victory against Eibar in their first game back from the covid break. The first half saw Madrid in total control, in which they scored 3 goals.  The second half was a bit of a different story, and unfortunately one we have seen multiple times this season.  Madrid took their foot off the gas, and are in debt to Courtois for only surrendering 1 goal.  Overall though, it is a positive result for Madrid, who were able to take off key players early in the second half for rest. Madrid remains 2 points behind leaders Barcelona.  Next game is home to Valencia on Thursday (3PM EST).

Man of the match.  Very strong game from the Belgian.  Multiple key saves in situations where EIbar should have scored.  Courtois is a world class player that is starting to earn his keep after a controversial

With Hazard on the left, Marcelo should be pushing up less to allow Hazard to create in 1v1 situations.  Regardless, Marcelo made his way forward. and was able to score off a nice strike outside the box.  It is unclear how he and Mendy will split time, but Marcelo remains a LB with unmatched offensive abilities, even with his defensive fragilities.

Standard performance by the Frenchman, although that is a nod more to his consistency than anything.

Solid performance from Ramos.  Scored an empty netter for the second goal.  Ramos continues to be a much need offensive presence in a year when Madrid cannot seem to produce enough goals.  With only 3 corners total in the game, Ramos did not have much of a chance to show off his aerial abilities.

Solid game by Carvajal.  Unfortunately, he was taken off for a knock to his ankle.  It remains to be seen how long he will be out.  Although Carvajal rarely receives high praise, he is a world class player and his absence will be felt.  There is no strong replacement to him at this time.

Toni scored a great goal to open up the contest.  It was a beautiful goal that could not have been placed better into the right hand corner.  Oddly for Kroos, i counted 4 poor passes/giveaways during the contest.  These mistakes cannot be made against more clinical competition.

Modric has so much influence in controlling possession and transitioning to driving the ball forward.  He plays a beautiful brand of football.  Enjoy it, because he wont be at Madrid too many more seasons.

Solid in defense and helped anchor the midfield and shield the back line.  He could have seen multiple yellows in this match and was lucky to not be seen off for a second booking.

The surprise selection in the xi.  The 19 year old Brazilian shows immense pace, and you feel slightly more comfortable with the ball at his feet than Vinicius Jr.  There remains a long ways to go for the youngster, but he put in a solid shift here.

Hazard looked strong in his return from injury.  His ball control is mesmerizing and his vision for passing is fantastic.  Unselfishly set up Ramos for the second goal.  It was his deflected shot that ultimately led to the ball finding Marcelo for the third goal.  With him dribbling so much, he tends to pick up knocks, and unfortunately that happened in this game.  Here is to hoping this is minor and he is not out long.  He is the best player on the team and he desperately needs continuity to get back to his world class best.

Benzema played well, with the brightest spot being his wonderful role in the buildup to the second goal.  He played a wonderful pass to Hazard across the box.  Big Benz is a master of making room for others and setting up his fellow players to succeed.  What he needs to add into his arsenal is his goal scoring ability, which has deserted him in the past 10 games.