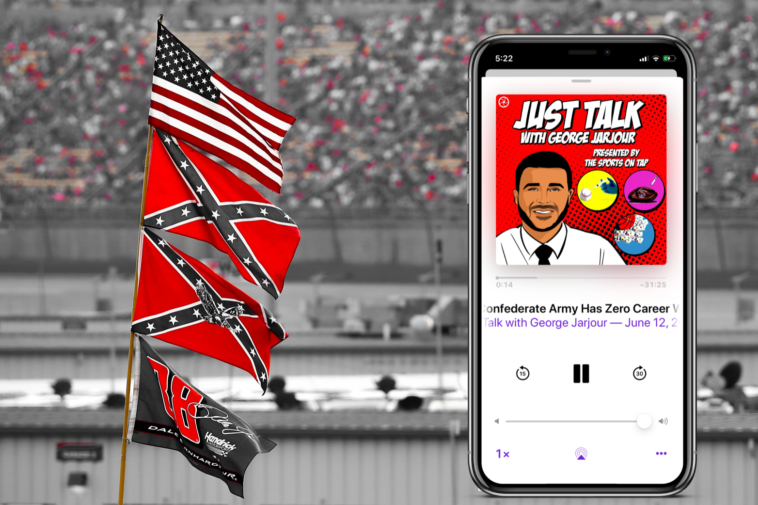 George Jarjour gives tells his thoughts on the Confederate Flag being taken out of NASCAR. Plus why Adam Silver is digging himself into a deeper hole. Plus as always.. Twitter Friday! George goes through his favorite tweets on Twitter.

Here are all the tweets I mentioned on the Podcast:

Kyrie is literally making calls trying to get players to not play. Lmaoooo him and KD really trying to not let Bron get another 1.

I understand where Kyrie Irving is coming from. The world has never been this focused on racial injustice. Bringing the season back will dilute that progress. I miss the NBA as much as the next fan, but we have to keep this pressure to continue to enforce change. ?????

Fun fact: Kyrie Irving brings 2-3 escorts with him whenever he heads to the Bahamas. Chantel Jeffries was one of them, but now she’s a “DJ”. https://t.co/c3W8O1Spjp

Lebron fans will look you straight in the eyes and tell you the last 4 out of 5 titles didn’t count then also tell you that an nba title in an empty gym with 20-30% replacement players counts.

This is just relly awful. Guys have every right to not want to play, as there's no vaccine for this right now. Who wants to risk their life? Who wants to be bumping into other sweaty guys? Replacement players is another gimmick. Please do the right thing & just end the season. https://t.co/a6mfZ1Zket

Aye man. Yal gotta take the LeBron jersey off for 23 seconds and admit that if we’re talking… 30% of the league being replacement players and it is NOT the same as a regular smegular nba title lol

If any Kings players decline to play we call first dibs on Vince Carter as a replacement.

Rob Manfred his entire time as the MLB commissioner pic.twitter.com/FhJd0baTyQ

Rob Manfred Destroyed The Game Of Baseball. There is no argument

Rob Manfred and the owners are failing baseball right now

All other major sports have a plan to return and baseball has nothing.

This is going to deeply damage the sport

Defending democracy is vital, but @KingJames only talks loud in the US. On China, not only is he silent, he actively shuts others up. He called @dmorey "misinformed" and "not really educated" for supporting #HongKong. All he cares about is money, not human rights. Hypocritical. https://t.co/vxVMWIjsjY

Doesn't LeBron like to speak out on human rights issues? Now that the human rights of Hong Kong people are undermined, would LeBron give solidarity? If not, then his solidarity with the black community is bullshit.
He is a clown with money in his eyes.

I've been saying Lebron is a joke and phony for a long time. I am glad the world is waking up to his selective outrage. He doesn't care about anybody but him and only does things he thinks will make his "brand" look good.

Looks like he cares more about what happens to his people. Should I start asking where’s China’s support for BLM?

This could easily be applied to you as well.. He doesn't live in Hong Kong and these issues aren't as integral into his psyche as it is yours. I'm sure there are areas of human rights you have not sufficiently covered. It's not because you don't care about humanity.

When @NASCAR owns you out of existence. pic.twitter.com/ngGw2He6ab

NASCAR driver Ray Ciccarelli has quit because he can't display the Confederate flag. He and the Confederacy actually have something in common: zero wins.

Signing Kaepernick is an objectively good idea and if the Seahawks don’t do it they’re stupid.

1) If he ends up being really good, you can trade him for draft capital.

2) No one wants to sign him, he has no leverage. Will come cheap.

The sooner Pete Carroll shuts up about Colin Kaepernick, the better.

If you have a chance to sign a player who is “clearly a starter in this league,” you do it.

You don’t go out and sign Austin Davis to be your backup instead.

Stop putting your foot further down your mouth.

Just your daily reminder that @Kaepernick7 turned down 7 mil per season with the broncos..don’t act like nobody wanted to sign him