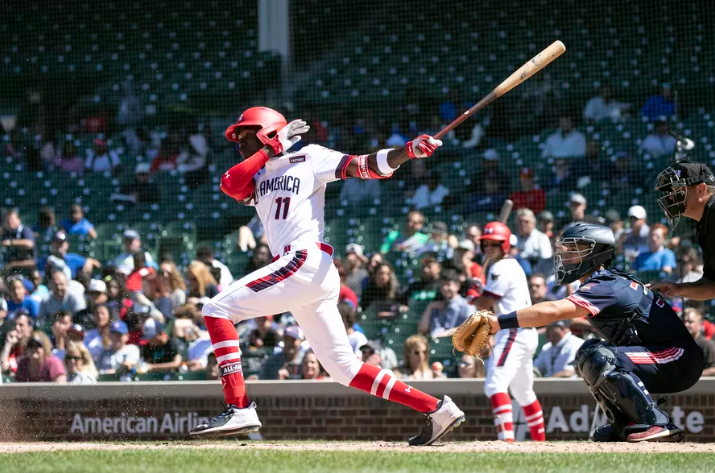 With the 16th pick in the MLB draft, the Chicago Cubs selected shortstop Ed Howard. Howard is a local product out of Mount Carmel High School as well as a former the United States Little League champion with Jackie Robinson West. There are a number of reasons to get excited about this pick. Here are just a few of mine.

Cubs fans have been spoiled by the dazzling play of Javier Baez, Jason Heyward, and Anthony Rizzo the past few years and it looks like that tradition will continue with Ed Howard. Howard was the highest-ranked high school infielder in the draft according to Baseball America and at only 18 years old, the sky is the limit. From the limited film I have seen, Howard doesn’t boast flashy plays simply because he doesn’t have to. His speed and positioning allow for an effortless downsizing of the difficult play.

The sample size on Howard’s bat is pretty small but I like what I see. In 64 HS varsity games, he batted.396 with 76 total hits and 29 XBH. By all measures, he has some work to do to convert that success to major league pitching but you can’t argue with the foundation he has built at the high school level.

Ed Howard is only 18 years old so it will likely be a while before we see him in the majors. The experts say the Cubs championship window will be closed in about 2 years so it is more likely than not Howard will be a centerpiece of a potential rebuild. This pick signals, for seemingly the first time, that Theo and Jed are planning past the championship window. There is no better way to do that than by stockpiling young talent as they did in the past. It is good to know that with a potentially dark future, Cubs fans will have a local kid who will peak as a professional around the time the team is ready to contend again.

Player comps for Ed Howard are somewhat of an enigma given his lack of a senior season and small stat samples but that will not stop me from trying. I am going with a Brandon Crawford comp given Howard’s heralded glove and tendency for solid single/double power.