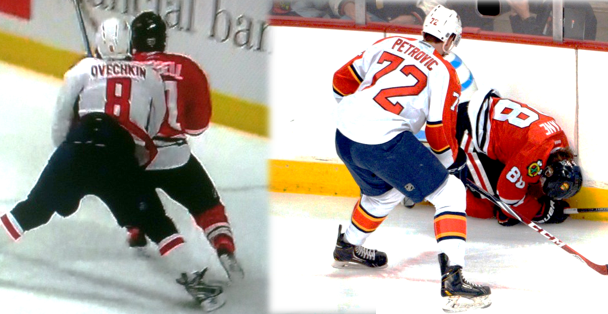 Brian Campbell and Patrick Kane returned from regular season collarbone injuries to propel the Blackhawks to Cup wins in 2010 and 2015.

When defenseman Brian Campbell signed an eight-year contract worth $56.8 million ($7.1 million AAV) on July 1, 2008, it was clear the Chicago Blackhawks were an organization moving in the right direction. With Campbell joining blossoming young defensemen Duncan Keith and Brent Seabrook on the blueline to go along with two potential franchise forwards in Jonathan Toews and Patrick Kane, it was clear the Blackhawks were ascending as a franchise.

By 2010, the team was a clear Cup contender after losing in the Western Conference Finals to Detroit the previous season. Chicago finished the regular season with a whopping 112 points, just one behind San Jose – the team Campbell was dealt to at the 2008 NHL Trade Deadline for a Cup run that fell short.

With the Blackhawks firing on all cylinders, a bump in the road presented itself when one of the greatest goal scorers of all time Alexander Ovechkin laid a dirty hit on Campbell below the goal line in March.

Ovechkin was suspended two games for the hit, and Campbell fractured his collarbone and a rib. Campbell was also rarely known to throw a big hit, but he certainly did once.

Campbell suffered his injuries on March 14, and he returned in Game 4 of the first round against Nashville with the Hawks down 2-1 in the series. His return to the lineup was not only important because of the steady presence he brought, but it also allowed Joel Quenneville to move Dustin Byfuglien back to forward. The Blackhawks rattled off three straight wins to down the Predators in six games while Byfuglien thrived as a power forward, playing an integral part in series wins against Vancouver, San Jose, and Philadelphia en route to the Cup.

And just remember, Campbell had a phenomenal keep-in and primary assist on a fairly important goal in franchise history.

Patrick Kane has been an incredibly durable player in his illustrious career. During the 2014-2015 regular season, Kane was leading the league in points (64) through 61 games. Unfortunately for Kane, he suffered a similar fate as Campbell on a hit by Florida’s Alex Petrovic.

You never want to take the ice without #88, but after being placed on long-term injured reserve, general manager Stan Bowman had some new-found cap flexibility. He gambled that Kane would return and the Hawks could still compete for a Cup, even if Kane could miss part of the playoffs.

With a timetable of 12 weeks expected after his injury in late February, Kane returned to the ice for Game 1 against Nashville of the first round – eerily similar to Campbell. Another miraculous recovery, this one seven weeks versus Campbell’s six. He scored 11 goals and registered 12 assists in 23 playoff games, playing a huge role in the team’s third Cup in six years.

While his season at one point looked like it could be finished, Kane put the finishing touches on adding a third Cup to his resume.