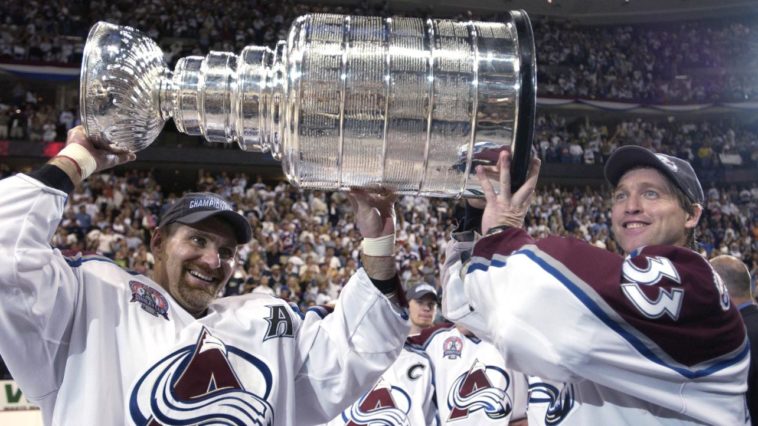 June 9th, 2001 was a historic day for the Colorado Avalanche when they won their second Stanley Cup. Colorado beat the New Jersey Devils in seven games to lead to their victory.

As Raymond Bourque got older with the Boston Bruins, it became clear his chances of winning the coveted Stanley Cup were getting smaller and smaller. The team had made it to the finals in both 1988 and 1990 but lost both times to the Edmonton Oilers. Bourque was a huge fan favorite in Boston because of his easy-going nature and dedication to the Bruins, but in 2000, he became a contender for a Cup team when he was moved to Colorado along with a few other players and a 1st round pick. The Avalanche weren’t even front runners to receive Bourque, but he was able to help the team when they were stricken with injured players.

Bourque immediately made an impact playing with defenseman Adam Foote. His first half of the season with Colorado after being traded in March, the team made the conference finals but were eliminated by the Dallas Stars. For the 2000-01 season, Ray was named an alternate captain by the Avalanche and as a team they were named the Northwest Division champions, Western Conference regular season champions and President’s Trophy winners with a total of 118 points heading into the playoffs.

The teams traded off wins in the finals with the Avalanche winning, then New Jersey, then the Avs, until New Jersey won two straight to send it to six games. Colorado bounced back with a 4-0 away win to send it to seven.

On June 9th, game seven commenced at Pepsi Center for the Avalanche to win it 3-1. Colorado won the series and the Stanley Cup for the second time. Patrick Roy famously stated that there was a name missing from the cup, meaning Ray Bourque. Regarded as one of the best moments in sports history, Bourque received the cup after captain Joe Sakic raised it for the second time with the Avs.

Raymond Bourque’s number, 77, is retired by both the Colorado Avalanche and Boston Bruins to honor his legacy and dedication to the sport of hockey and to his two teams. Shortly after winning, Bourque brought the cup back to Boston which was attended by no less than 20,000 fans passionate about his commitment to the game; a class act respected by fans across the league.