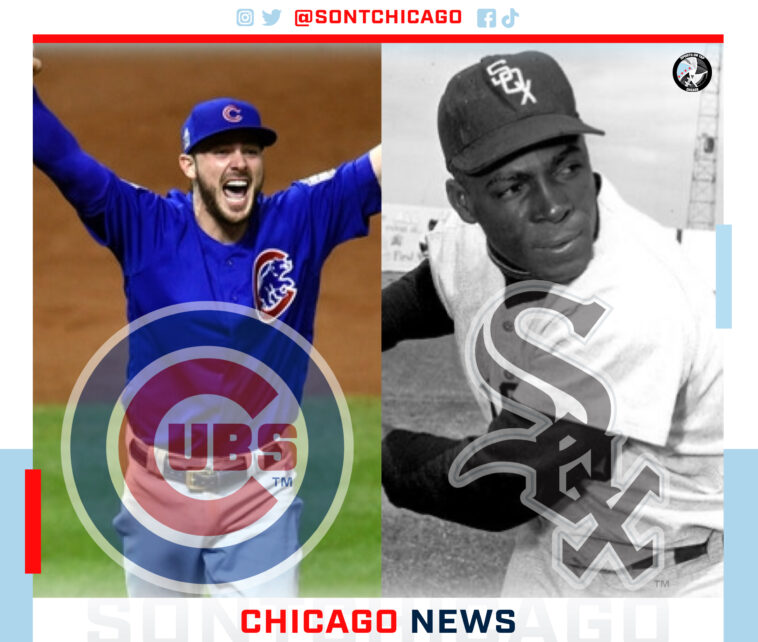 Even with no real baseball being played, the month of May (and now early June) has been one hell of a month for baseball in Chicago. I’m, of course, talking about the Shoeless Goat Podcast’s Crosstown Centurion, a tournament that has been able to replace actual Chicago baseball during the COVID19 pandemic to the best of its ability.

After 173 games across 30 best of seven series, the 16 Greatest Cubs and 16 Greatest White Sox teams in Chicago history have been boiled down to the final two. The 2016 Cubs and the 1954 White Sox are all that remain, battling for the ultimate crown in Chicago baseball.

2016 Cubs. 1954 White Sox. This week, for all the marbles. Who’s your pick to win the Crosstown Centurion as the greatest baseball team in Chicago history?

Here is how the bracket shook out as we head into the championship, and how we arrived on the greatest team in each franchise’s history: 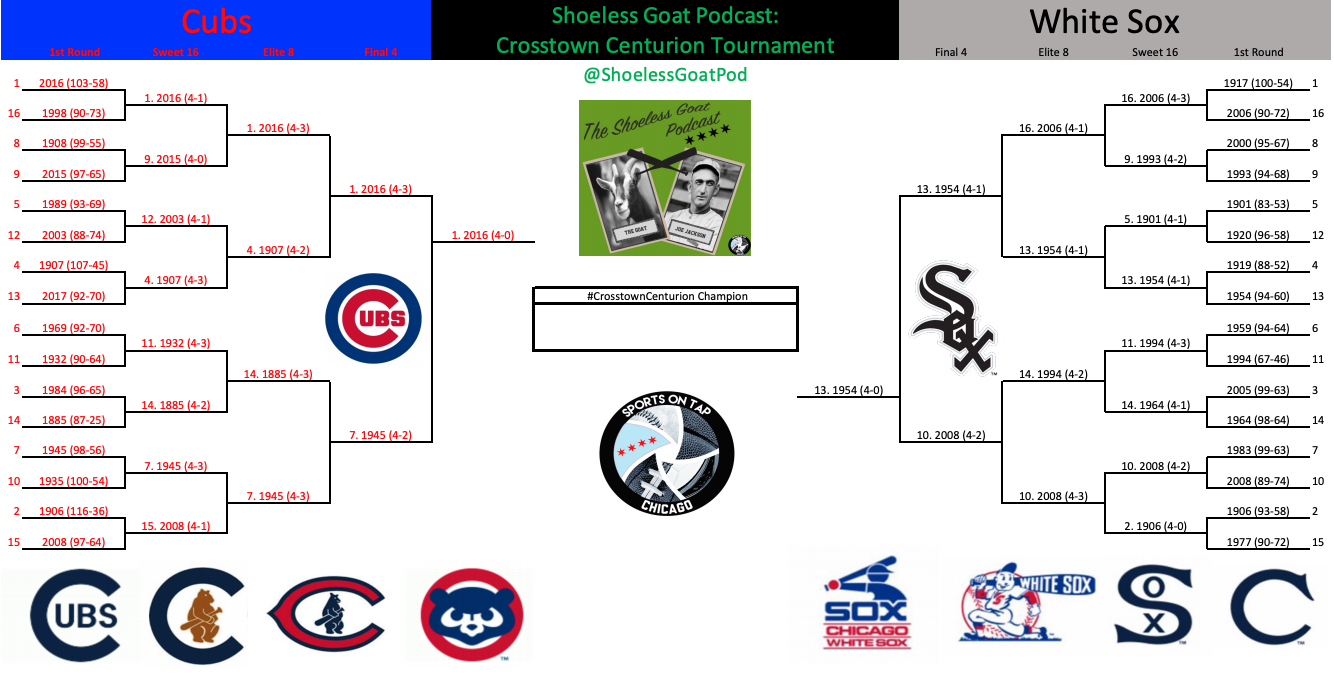 How they Got Here:

The 1954 White Sox absolutely steamrolled their way through the South Side of the bracket, going an absurd 16-3 through the first three rounds.  This wasn’t just a result of favorable seeding, though. A cinderella of sorts, this team was a 13 seed based on my original seeding.  Maybe I’m just horrible at seeding teams, but they showed me up by obliterating every opponent in their path.  In real life, the 1954 Sox were definitely an underrated 94 win team, thanks to the Cleveland Indians winning 111 games that same season.

They laid waste to teams from every era of White Sox baseball: the 1919 Black Sox, featuring the majority of the 1917 World Championship roster, the 1901 AL champs, the oldest team in the bracket for the Sox, the 2006 team that blasted 236 home runs, and finally the 2008 AL Central champs. And, as I mentioned above, none of these series were particularly close, with no opponent winning more than one game.

On the North Side of the bracket, things played out as expected.  While the 2016 team didn’t leave every team in their dust, they were able to get past challenging, historical opponents en route to the championship.

The Curse Breakers started off by running right past the 1998 Cubs, a challenging 16 seed that featured a God-level Kerry Wood and the Home Run Race Sammy Sosa.  Much like Sammy Sosa and the Cubs’ relationship, the 1998 team disappeared in short order.  They then faced perhaps their toughest (and most existential) test in the 2015 Cubs, with Kyle Hendricks facing off against Kyle Hendricks twice.  They always say the toughest opponent is yourself, and the 2016 Cubs lived by that, winning the series in a 7 game grind.

Luckily our computer simulation survived along with the 2016 Cubs, as they then took down the 1907 World Champions in 7 games.  The bracket ended much like the White Sox side, with a decisive four game sweep agains the 1945 Chicago Cubs, the last NL champion before the 2016 team.

Why They Can Win It All:

Simply put, they have the best player in the series on their side in the 1954 version of Minnie Minoso.  In real life, Minoso hit .320 on the year, to go along with 19 home runs and an 8.2 bWAR season.  In this tournament, Minoso has been even better somehow, collecting 16 hits in 5 games in round one, and winning the Final Four MVP with a .706 average in the four game sweep.

This team, obviously, didn’t win 16 out of 19 tournament games because of one player.  The 1954 lineup features a balanced attack led by 1954 AL All Stars spanning the diamond with Nellie Fox (2B, Hall of Famer, too), Chicao Carrasquel (SS), Ferris Fain (1B), George Kell (3B), and Sherm Lollar (C) all having All Star years in 1954.

On the mound, the 1954 White Sox have been led by Virgil Trucks, who has been dominant as their ace throughout the tournament.  Behind Trucks, the four man rotation of Bob Keegan (All Star), Jack Harshman, and Billy Pierce is a formidable group that had the second best ERA (3.05) in the AL in 1954.

Overall, with a strong rotation with no holes and a lineup full of All Stars, the 1954 White Sox have been able to assert their dominance on the South Side of the bracket.  Facing a 2016 Cubs team that is heavily dependent on power, if the pitching staff can do their thing and if their offense can lead a consistent, balanced attack to get to the 2016 Cubs’ bullpen, that should be enough to push the 1954 White Sox to victory.

There are no weak spots in this Cubs lineup.  While they were challenged more during the tournament than the 1954 Sox, this team has perhaps the most complete lineup in the tournament.

On offense, they feature a strong lineup, led by the 2016 NL MVP Kris Bryant and All Star versions of Anthony Rizzo, Ben Zobrist, Addison Russell, and Dexter Fowler.  On top of those guys, they feature young incarnations of Javy Baez, Willson Contreras, and a nice dose of power from Jorge Soler.  While power is certainly a major factor for this team (as a team they put up 199 home runs), the fact that just about everyone in the lineup could hit to some extent is really what led to production to the tune of 808 runs, second best in the 2016 NL.

While the pitching of the 1954 White Sox has been very good, this is another type of threat they will be facing, one that will be hard to contain over seven games.

Likewise, on the mound there isn’t much of a break.  With a four man playoff rotation featuring Jon Lester (5.5 bWAR), Kyle Hendricks (5.2 bWAR), Jake Arrieta (4.5 bWAR), and John Lackey, the rotation screams as another strength for this Cubs team.  The bullpen has some questions, but strong outing from the rotation can limit that.

The roadmap to victory for the 2016 Cubs is fairly straightforward. If the rotation can dominate, limiting the bullpen’s exposure, and the offense can generate power consistently, it will be tough for the 1954 Sox to keep up.

I would also throw out the team of destiny card on here, given from early April everything seemed to click, but the computer does not care about teams of destiny, or your feelings.  Just ask the 2005 White Sox.  Luckily for this Cubs team, there’s enough firepower and talent up and down the roster to win them four more games.

Considering the above, this should be one hell of a series.  On both teams you have dominant four man rotations, to go along with potent, deep lineups. While both teams can score plenty of runs, the difference in shape of how those runs are scored will be interesting to monitor.  You also have a battle of 7+ bWAR superstars in Minnie Minoso and Kris Bryant, something the computers will certainly factor into this one.

Here is the way our team is seeing this final series play out:

Not a huge surprise here, with all three of us picking along with team allegiance.  To help balance things out, we also ran a fan poll on our SGP twitter account, with 62% of the vote going to the 2016 Cubs.

While the 2016 Cubs seem to be an overwhelming favorite among voters, this should be a thriller of a series between two all time great teams.

Get Caught Up on the Crosstown Centurion

While we will be broadcasting the finale live on Twitch (@sontchicago), if you want to look back at our previous work on the Crosstown Centurion to get ready, we have you covered!  All of our Shoeless Goat Podcast episodes are available on Spotify and Apple Podcasts, and as always here on SONT Chicago.

Tune in tomorrow night for our live show for the finale!

The Finals for the Crosstown Centurion will be simulated LIVE on Twitch (sportsontapchicago) Monday 6/8, 8pm Central time. Tune in to find out the winner between the 1954 White Sox and the 2016 Cubs. The podcast will be released the next day. #Cubs #WhiteSox #MLB #NoYadiHOF