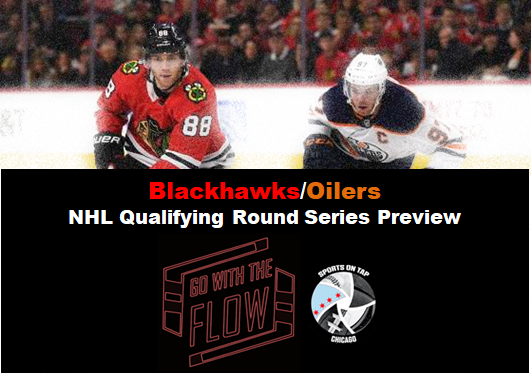 Blackhawks and Oilers will square off in a five-game series as part of the NHL's qualifying round.

As Kevin, Dan, and I discussed in this week’s latest installment of the Go With The Flow podcast (available on Spotify and Apple), commissioner Gary Bettman has announced a return to play plan. If all goes well, the 12-seed Blackhawks would square off against the 5-seed Oilers at a neutral hub city in a five-game series as part of a qualifying round to make the Stanley Cup Playoffs.

The Blackhawks are lucky they have any hockey left to play prior to the 2020-21 campaign, but they’re the last team in, and they actually have a chance to make some noise against Edmonton. There’s no more lethal 1-2 punch in the National Hockey League than Connor McDavid, considered by most to be the best player in the league, and Leon Draisait, this year’s runaway Hart Memorial Trophy (MVP) favorite. Draisaitl (110) and McDavid (97) were the top two skaters in points prior to the NHL going on hiatus. With the regular season canceled, they will finish as the top two scorers.

Corey Crawford is tied for 15th in league save percentage (.917), which is a miracle because of the injuries suffered, lack of depth, and developing presence Chicago has dealt with on the blueline. For the Oilers, 38-year-old Mike Smith checks in at 45th (.902). Blackhawks fans will remember Smith’s arguable flop in the first round of 2012 postseason against the then-Phoenix Coyotes that lead to Andrew Shaw’s suspension.

Outside of Darnell Nurse, Edmonton is vulnerable on the blueline. Top-end talent like McDavid and Draisaitl probably don’t fear what Chicago has in their D-corps either, but Chicago has potent forwards of their own, including Patrick Kane, Jonathan Toews, Alex DeBrincat, and rookie 30-goal scorer Dominik Kubalik.

This series is going to be an absolute barn burner. Honestly, it’ll be must-watch hockey. I’m expecting tons of pace. Edmonton got even faster and skilled after acquiring/saving both forward Andreas Athanasiou and veteran defenseman Mike Green from Detroit. Young mind Jeremy Colliton and long-time NHL fixture Dave Tippett will most likely be playing their top-end guys heavy minutes. Sure, there’s a rust factor there, but don’t be surprised to see top-end forwards get double-shifted, stay on the ice for all two minutes of the man advantage, and possible even slightly extend shift length.

It’s a five-game series of a bunch of well-rested and healthy players. In a five-game series, there’s less room for error, and I’d expect the top-end talent on the ice constantly. With two subpar defenses and two above average offensive groups, this series could be absolutely electric.

In order for the Blackhawks to win, they’ll need young players like Adam Boqvist to step up on defense. Calvin de Haan began skating this week, and his veteran presence would be welcomed on the blueline if Chicago is allowed to activate him off injured reserve. The top-nine offensive guys need to dig deep and generate as much offense as possible, because there’s a good chance Crawford and the defense play on their heels much of this series against two all-world forwards.