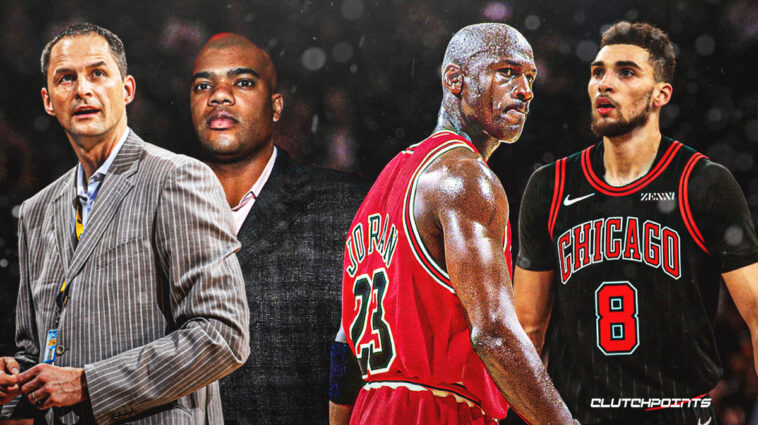 The six banners hang in the rafters, but those are the only remnants of the dynasty that fans still see in the United Center these days. Phil Jackson no longer roams the sidelines. Dennis Rodman no longer dominates Chicago’s media scene. Michael Jordan’s last game as a Chicago Bull was twenty-two years ago. “The Last Dance” should have no impact on today’s Bulls nor on fans’ expectations for what those Bulls can achieve. The documentary shouldn’t matter. The reality is that it does.

It would be an understatement to say that Bulls fans were excited when the news broke in April that a new front office regime would be coming to power. Forman is out. Paxson is reassigned (grumble). But what’s important is that for the first time in thirty-five years, Jerry Reinsdorf looked outside of the organization for a solution. That solution fortunately – and somewhat surprisingly – took the form of rising front office superstar Arturas Karnisovas, a member of the Denver Nuggets brain trust coveted by several organizations over the past few years. Coming to Chicago should never be a hard sell, both for free agent players and talented executives. The reality of the Bulls’ ineptitude and inescapable front office drama in the twenty-two years since the team’s last title run has unfortunately made it more difficult than it should be. So it was a pleasant surprise when Karnisovas agreed to take the helm and correct the direction of an organization that had veered badly off course.

The reaction of the fan base to the change in regime was more a sigh of relief than anything. Yes, Karnisovas is a talented executive with a plan for rebuilding scouting and analytics departments that had fallen far behind those of every other team in the league. Of course Chicago fans are excited for the team to once again select All-Star caliber players each year in the draft. But the predominant feeling among Bulls faithful was one of relief, an acknowledgment that the weight of carrying the “Fire GarPax” mantle – a burden with no seemingly logical end in sight – had finally been lifted. We were happy simply being relieved. And then “The Last Dance” aired.

After Episode 10 of the documentary, Michael Wilbon of ESPN – and a Chicago native – asserted that the Bulls dynasty of the 1990s changed the way the Windy City viewed itself, both its notion of being a sports town and its cultural identity. Reeling off one of the most successful runs of dominance in American sports history, Michael Jordan and the ‘90s Bulls elevated the standard – and the expectations – for what it meant to be a part of this city. While the nostalgia for those teams and their accomplishments has never waned, twenty-two years away from the dominance has allowed the organization and its fans to forget that standard of excellence demanded by all who were a part of and witnessed those teams. Reliving every key moment of the dynasty over the past five weeks has reminded Bulls fans of what this team should be expected to achieve. And while no one is expecting Zach Lavine to turn into Michael Jordan, fans’ relief from front office turnover has started transitioning into greater expectations to win – now.

It’s not fair to Karnisovas or new GM Marc Eversley that a documentary about what happened more than twenty years ago should impact fans’ ideas of what can be reasonably expected in the short-term as the two start their tenure in Chicago. But the reality is that the sense of urgency for making clear and unmistakable improvements to the makeup of this Bulls team is likely now greater as a result of “The Last Dance.” For starters, the duo can relieve unpopular head coach Jim Boylen of his duties (which will likely happen once the fate of the currently suspended NBA season is made clear). Putting an end to Boylen’s press conference gaffes and inexplicable lineup decisions is a necessity. Bringing in a marquee free agent in either 2020 or 2021 would be a luxury, and a much-welcomed one at that. Those two moves alone would convince Bulls fans that this is an organization headed in the right direction. And after five weeks of watching a team that reached the Promised Land and stayed there for nearly decade, that convincing likely needs to now happen sooner rather than later.