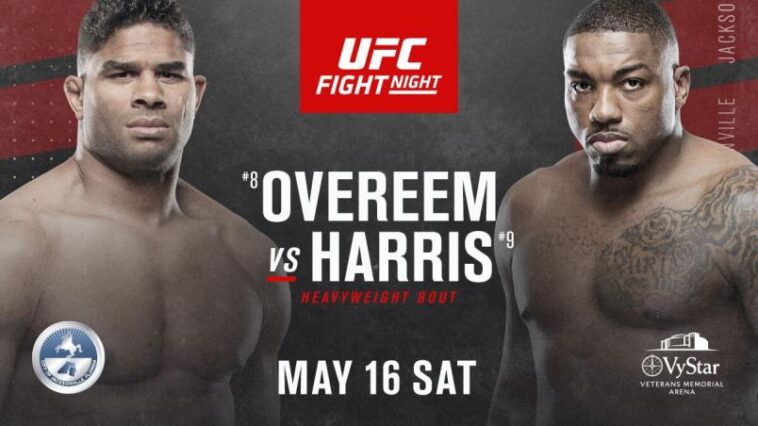 Two shows down, one more to go. What a week it has been for the UFC and the return of professional sports. We’ve already had two great shows go off with little to no problems. Let’s get ready for the final show of the week LIVE on ESPN and make you guys some more money!

Wednesday night we started off on fire. Picking the first 4 fights of the night. Some of the fights towards the end of the night didn’t go our way but we did end up finishing in the black. Let’s keep that trend going for Saturday night.

As you probably know by now. The main event is a fight between 2 well-known heavyweights. The former kickboxing champion and the man who took down Brock Lesnar with body kicks, Alistair Overeem, and Walt Harris, who is fighting for the first time since the tragic death of his 17-year-old step-daughter Aniyah Blanchard. I think a good majority of people watching this fight will firmly be in the corner for Walt Harris. I know I will be. Sometimes motivation is all you need in this sport.

Without further ado, let’s get to some of the picks. The first fight of the night is actually where I’m going to start my picks. It’s a great matchup between a pair of two very different welterweights.

I love these odds for one of the toughest fighters in UFC history. Matt Brown has been apart of many fights deep in UFC lore. Who could forget about his wars with Cowboy and Lawler? Matt Brown may be getting your there in age and Miguel Baeza may be undefeated but I like the number with Brown and I think we are gonna see him welcome the newbie to the UFC.

I think this line is going to move just based on how Landwehr’s first and only UFC fight went. Not every day do you see a guy with an 0-1 UFC record that couldn’t escape the first round as a pre-fight favorite. On the other hand, Elkins has lost 3 straight but before that, he was looked at as a contender in the division. Look for Elkins to get off his skid and record a much-needed win.

This might be one of the most exciting matchups of the whole night. Song Yadong is an absolute rocket ship. At only 22 years old and from a country like China, this is a guy that promoters dream about. On the other hand, Marlon Vera is no slouch. Vera is the perfect complement to Yadong’s explosiveness. Vera is a top BJJ practitioner and will presumably look to take the fight to the ground. This will be a really fun fight but look for Song Yadong to finish it with his stand up.

Give me Walt Harris and the redemption. Walt Harris has some of the best power in the whole sport. Look no further than his finish against Aleksei Oleinik. The man has POWER. So does Overeem but as we saw him in his fight against Rosenstruick, he may just sit back and try to get a decision. Walt Harris isn’t looking for a decision.

This should be a really great card. Follow along with our picks @SONTChicago.