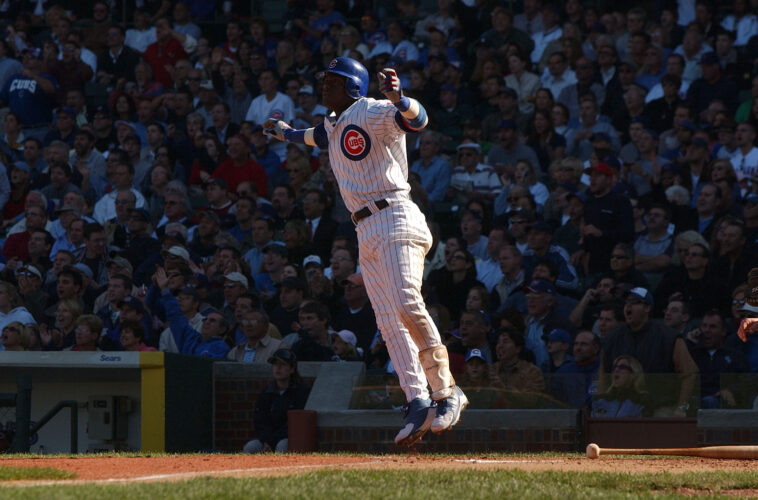 CHICAGO - SEPTEMBER 30: Sammy Sosa #21 of the Chicago Cubs hops after hitting a solo home run in the sixth inning against the Cincinnati Reds during a game on September 30, 2004 at Wrigley Field in Chicago, Illinois. (Photo by Jonathan Daniel/Getty Images)

I attended my first Chicago Cubs game during Sammy Sosa’s historic 1998 campaign in which he belted 66 home runs and drove in an MLB-leading 158 RBI. I was only a mere three years old at the time, so my memory of the day (and the season) is nonexistent. As a toddler, I obviously couldn’t grasp that history was unfolding in front of me as I sat in one of baseball’s cathedrals for the first time. I had no idea that we were witnessing something remarkable when my dad put the Cubs and Bulls on TV that summer, but he recognized that fact.

Any Chicago sports fan in their early-to-mid twenties will have heard countless stories, read plenty of interesting pieces, and scoured YouTube for old highlights of games we are too young to have fond memories of. Through watching The Last Dance we’ve truly come to understand the global phenomenon that is Michael Jordan the 90’s Bulls. Check out our coverage of the docuseries here and here.

The Last Dance has become appointment television for millions, and deservedly so, but I’m most excited for a different ESPN documentary: Long Gone Summer.

Thrilled that this news is finally public.

Long Gone Summer, my new nonfiction feature on the 1998 Home Run Chase between Mark McGwire and Sammy Sosa, is coming next month to @espn @30for30.

It's been a huge joy to get to make this movie and I can't wait for y'all to see it. pic.twitter.com/vWb61It2Ub

We briefly touched on Sammy Sosa & the 1998 Cubs team on the Shoeless Goat Podcast’s Crosstown Centurion bracket reveal & breakdown, but I’m most interested in hearing directly from Slammin’ Sammy as he discusses the home run race that revived baseball. The overarching question will be how prominent of a role steroids play in the documentary. Mark McGwire admitted to juicing a decade ago, yet Sosa has never publicly spilled the beans.

In Sammy’s defense, a 2009 New York Times report claiming that he tested positive for PEDs in 2003 has not been proven. However, I’ve made enough Flintstones vitamins jokes about whether they really fueled Sammy Sosa’s moonshots to not let my fandom get in the way of the (highly likely) reality. Both Sosa and McGwire were interviewed at length and signed off on what will appear in the 30 for 30, and PED use will deservedly get its share of airtime.

Aside from seeing Sammy’s beloved homer hop too many times to count and re-living tape measure dingers, my overarching hope for the documentary is that it forces Tom Ricketts’ hand in bringing one of the franchise’s most storied sluggers back to the Friendly Confines with open arms.

The Cubs chairman has shared that he won’t even consider bringing Sosa back in an official manner until Sammy admits to using steroids. If that’s what it takes, my fingers are crossed that a genuine admission and apology mixed with fan fervor in the days after Long Gone Summer airs are enough to make a post-coronavirus reunion possible. I cannot imagine a more fitting occasion for Slammin’ Sammy to return to Wrigley than the first game back where over 40,000 adoring fans are allowed to pack 1060 W Addison.

Though I wasn’t old enough to live through the great chase of ’98, I remember the sadness and confusion I felt around Sammy Sosa’s unceremonious exit from the North Side. Hopefully this deep dive into the Sosa-McGwire home run race during which Sammy’s record-setting 20 HR June saved what was once America’s pastime lays to rest past ills.

Though he ultimately wound up with 66 home runs – four fewer than Mark McGwire’s 70 – Sosa won the NL MVP and the Cubs actually made the playoffs in that storybook season. Twenty-two years  later, though, the numbers don’t matter. What matters to me is whether Cubs fans will get a clearer picture as to how one of the storied franchise’s most iconic players fits into the organization’s future.