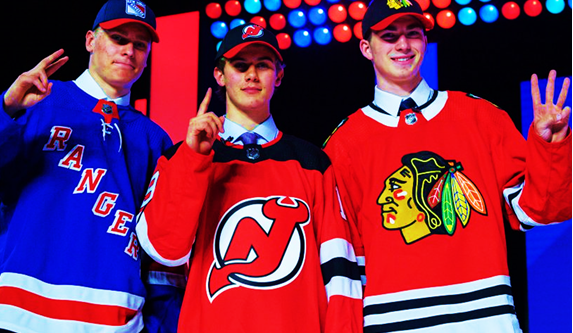 The NHL is still considering holding its draft in June

Earlier this week, it was reported the 2020 NHL Draft is still likely to take place in June.

A final decision on whether to have the NHL draft in early June could come today but the league’s call on that still could slide into the coming days. At this point, it’s more likely than not the draft will be held in early June, but no date(s) set yet.

For draft nerds out there (*looks in mirror ?), if draft goes in early June, NHL has already said the lottery would revert to how it was last done in 2012, when only bottom five teams (top five in odds) can get the No. 1 pick. Lottery winner can’t move up more than four slots.

Let me preface my thoughts by saying I completely understand why commissioner Gary Bettman and his league would be interested in keeping the event in early June. As the COVID-19 pandemic continues, sports fans are clamoring for anything. The NFL Draft was successfully conducted virtually, and plenty of scouting has been completed in anticipation of the draft. Scouts and hockey operations departments wouldn’t have the luxury to scout prospects in postseason play by having it in June, but they certainly could pull it off and see positive TV ratings.

However, there’s the old saying: “just because you can, doesn’t mean you should.”

The NHL should postpone its draft.

I know; I want sports, too, but his feels rushed. There is so much that is yet to play out. First of all, if the NHL Draft is canceled now, that means the league can’t finish the regular season. Postseason performance also impacts which draft slot teams have, and there’s no way the NHL playoffs are finishing before June.

Teams on the outside looking in still have the chance to make the playoffs if the regular season is continued which obviously effects the lottery, and then the deeper a team goes in the playoffs, the lower their pick is.

To be frank, it’d be asinine to hold a draft lottery on present day standings if the plan is to eventually award the Stanley Cup in the late summer. There are multiple teams that made trade deadline moves where picks are conditional. That’s another HUGE issue that needs to be worked out. If the season isn’t completed, what happens to those picks? What if you are the Arizona Coyotes that gave up a first to get Taylor Hall and don’t even get a chance to earn a playoff spot with a hot finish to the season before he becomes a free agent?

It’s a rare window for the NHL to be the main attraction, and they’d actually have that opportunity in June. This is a business, and I completely understand that. This just feels rushed. There’s so much more that needs to be played out. Oh, and you say the lottery odds would temporarily go back to the old 2012 way? Just another reason it shouldn’t happen. Rushed decisions now will impact organizations for years to come based on where teams are slotted to pick in this “unique” draft.

Slow down. Hold the draft later. Award the Stanley Cup first. Then we go. It’s simple, and I hope the league doesn’t royally screw it up. And hey, maybe by some act of god a few months down the line it will be remotely possible to even have a couple fans in the barn in Montreal.