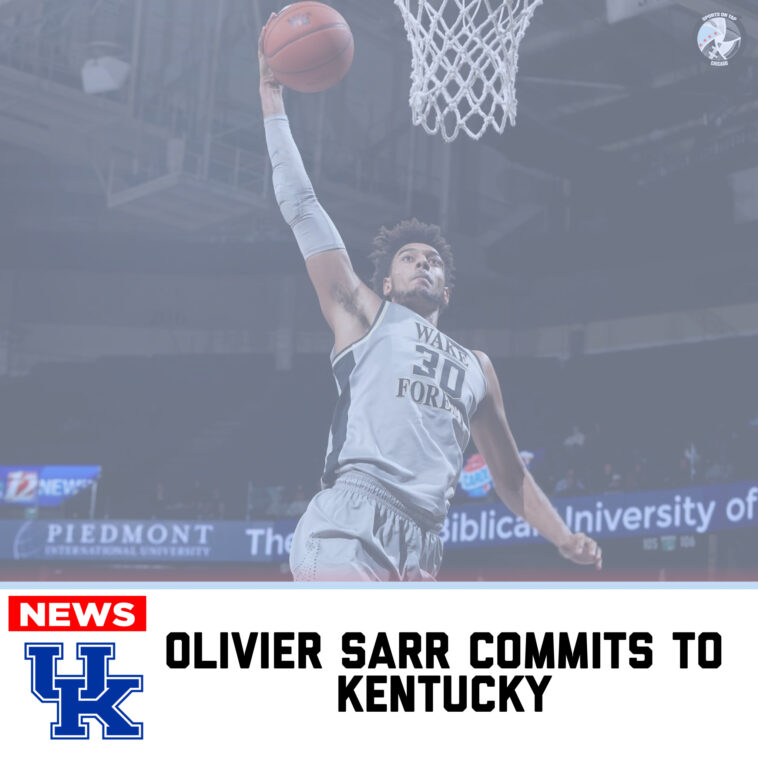 Well we saw this one coming when it was announced. I mean, we literally saw and predicted this one on the latest B-Fox and B-Frank Show. Just as quickly as Wake Forest had fired Danny Manning and hired Steve Forbes, the Demon Deacons found out their best player, 7-footer Olivier Sarr, was entering the transfer portal and has committed to Kentucky.

As we speculated on this week’s show, Sarr looks to be headed to Kentucky https://t.co/W5RjCJHiXH

It honestly could not have worked out any better for Cal and Kentucky that Wake Forest decides well after College Basketball was cut short due to the Coronavirus to fire their head coach. The move caused Sarr to enter his name into the transfer portal. The Wildcats had just missed out on Purdue big man Matt Haarms a couple weeks ago and now land a significantly better player and arguably the top talent on the transfer market this offseason.

How does 13.7 points, 9 rebounds, and 1.2 blocks per game sound to help replace the void left by Nick Richards? Not too bad and yet again, Cal gets his guy. On the flip side this is a crushing blow early to Steve Forbes and Wake Forest who already were going to be fighting an uphill battle. Sarr did the possibility to return to Winston-Salem on the table, but it felt like a formality given the other programs that would be swarming.

The big question now is will he get a waiver from the NCAA to play immediately? The current transfer situation, meaning the discussions among the NCAA, boards, and whatever focus groups they have going, is a complete mess. Per usual. My take is if a coach can change schools during the offseason, the players he leaves behind should have the same right.

WF let Danny Manning go on April 25th! I am sure Sarr thought all was well with his coach.

Sarr is a prime example of a player who transferred because of a coaching change. NCAA should grant a waiver ASAP & WF shouid assist.

Biancardi has the right idea, but saying that Wake Forest should help their best player not just leave but become eligible to play immediately is a bit much. That said, they shouldn’t stand in the way of Sarr being granted immediate eligibility. Should Sarr not get a waiver he will sit one year and play in the 2021-22 season. Either way, Kentucky lands a very good big man that can learn a ton and develop much like the bigs over the past decade.