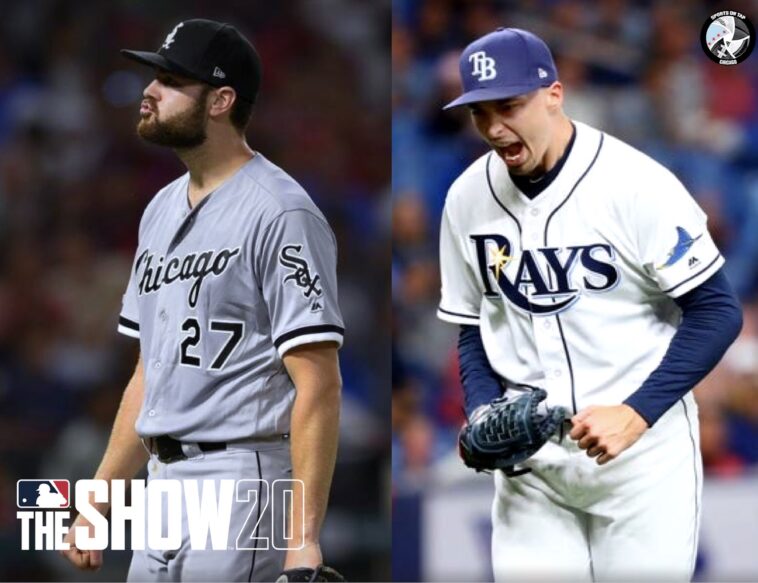 After knocking out Bo Bichette and Ian Happ on his march to the MLB The Show Players League finals, Lucas Giolito faced his toughest test yet.  That came in the form of Blake Snell, the 2018 Cy Young winner for the Tampa Bay Rays, who also was the number one overall seed in the playoffs.

Snell earned the top seed after a dominant regular season, where he went 24-5. He continued that domination into the playoffs, smoking Gavin Lux in two games in the quarterfinals.  The semifinals were a bit more interesting, as Jeff McNeil of the Mets took Game 1.  However, Snell quickly bounced back, winning Games 2 and 3 by a combined score of 15-0.

Two aces in a best of five for the Players League Championship.

History was also not on Giolito’s side in this matchup – he had fallen to Snell 9-2 in their one regular season matchup.  On top of that, this was the second playoff matchup between the White Sox and Rays in MLB history, and the last one didn’t go so well for the White Sox.

Could Giolito reverse history and take home the Players League title? Well, read along to see how the series went!

For Game 1, the lineups for both teams were pretty standard for how they had trotted their teams out during the playoffs to this point.  Giolito went with his standard Game 1 starter in Dallas Keuchel, while Snell went with Charlie Morton over himself.

The Players League championship is here! Here are the starting lineups for Giolito and Snell for Game 1 in Tampa Bay#WhiteSox #MLBTheShow #MLBPlayersLeague #Rays pic.twitter.com/Hozon4A2l7

The game started pretty quietly for Giolito, as Snell mowed him down in a six pitch 1-2-3 inning.  The same could not be said for Giolito’s pitching, since as soon as Snell came up to bat, the opener quickly got ugly.

Willy Adames got things going with a bomb to left, with Mike Zunino adding another homer later in the inning to push the score to 3-0.  Giolito was able to muster one hit in the top half of the second, but couldn’t get anything else going.

It seemed like Giolito’s fortune was beginning to change after Dallas Keuchel got Kevin Kiermaier and Charlie Morton out to open the inning.  However, that sentiment quickly evaporated as Jimmy Cordero came on in relief and immediately gave up a single to Adames and a two run dinger to Austin Meadows.

The game went to the third with Giolito trailing 5-0 and Charlie Morton trying to finish a complete game.  He was able to at least make the game interesting, chasing Charlie Morton and scoring one on a Yoan Moncada RBI single.  That was all she wrote in that game though, as Jose Abreu continued his cold streak, grounding into a double play to end the game at 5-1.

Blake Snell takes Game 1 easily, winning 5-1 over Giolito at the Trop, belting 3 home runs in the process. Can Giolito make things interesting in Game 2 before the series heads back to Chicago? #WhiteSox #Rays #MLBPlayersLeague #MLBTheShow pic.twitter.com/5AQLtkjFvW

In Game 2 Giolito decided to go with the old adage “If you want a job done right, do it yourself”, going with his virtual self to start the game on the mound.  Of course, that doesn’t affect his offense, and Snell got Gio out in quick order with another 1-2-3 first.

The bottom of the first in Game 2 almost exactly mirrored Game 1, with Willy Adames launching a ball off the fence to open the inning.  Snell got off to another hot start, chasing Virtual Giolito after a Ji-Man Choi perfect-perfect homer to right center made the game 3-0.  Aaron Bummer was able to stop the bleeding there, coming in and forcing a broken bat pop up.

The game got immediately more interesting in the second, with Giolito leading off with a Yasmani Grandal bomb to dead center.  He couldn’t get anything going after that in the second, but neither did Snell – Giolito held him scoreless with Aaron Bummer to end the second down 3-1.

Blake Snell went with Jose Alvarado to open the inning, a move that seemingly backfired after Edwin Encarnacion deposited a ball into the left field seats to make the score 3-2.  Unfortunately, just like in Game 1, one run closer was all Giolito could get – Tim Anderson, Yoan Moncada, and Jose Abreu went down in order to end the game.

Despite a last inning Parrot Ride from Edwin Encarnacion to bring the game within 1, Snell takes Game 2 over Giolito 3-2. The series heads back to Chicago with Snell up 2-0 in the Best of 5 Championship#WhiteSox #Rays #MLBTheShow #MLBPlayersLeague pic.twitter.com/HFtotE562w

Game 3 of the series headed back to Chicago, and some roster drama along with it.  On the mound, each player went with the Game 1 starters on short rest – Dallas Keuchel for Giolito’s White Sox and Charlie Morton for Snell’s Rays.  On top of that, Giolito made the decision to bench the struggling Jose Abreu for Edwin Encarnacion.  The “yOu CaNt PaY aBrEu ThAt MuCh” crowd was certainly happy to be able to say they told you so.

At first the pitching decisions seemed to pay off for both players – Giolito and Snell both got out of the first scoreless with one hit allowed each.

In the second, things got going for Snell.  Keuchel gave up a hit to open the inning, and then got pulled for Steve Cishek.  Cishek then promptly gave up a hit before a double play helped get closer to the inning’s end.  Yandy Diaz then struck first for Blake Snell, rocking a two run homer to make the game 2-0.

In the bottom half of the inning, Eloy Jimenez and Nomar Mazara went down in order before a perfect-perfect base hit from Luis Robert got a runner on.  Giolito then brought the benched Jose Abreu in to pinch hit for the pitcher spot, and he promptly struck out with two runners on to end the inning.  Woooooooof.

The top of the third brought the deluge with it, as Snell put up a 6 spot on the board to bust the game wide open to an 8-0 lead.  This was death by a couple hundred papercuts, with a series of doubles and base hits led to Giolito waving a white towel on camera while down 6-0.

In the spirit of waving the white flag, Giolito went down in the third 1-2-3 with TA, Moncada, and Encarnacion to end the series and send the streets of Tampa Bay into pandemonium.

While it was a tough loss, it was still a hell of a run by the White Sox ace to get that far, especially as he had not played much before the league began.  Yes, it wasn’t the same as real baseball, but it was still something to watch and get (somewhat) invested in.  Plus, even a simulated White Sox playoff run gets the optimism levels up a little higher while we wait for baseball’s return.

Here’s to hoping it comes sooner rather than later so Giolito can avenge this loss on the field in the 2020 ALCS.

Thank you everyone that supported me through the Players League! I had a blast learning how to play @MLBTheShow and competing with a bunch of awesome players around the league. Big congrats to @snellzilla4 on winning the ship. I may have wanted it… but you NEEDED IT SO BAD! ? https://t.co/QBALNzlEcS