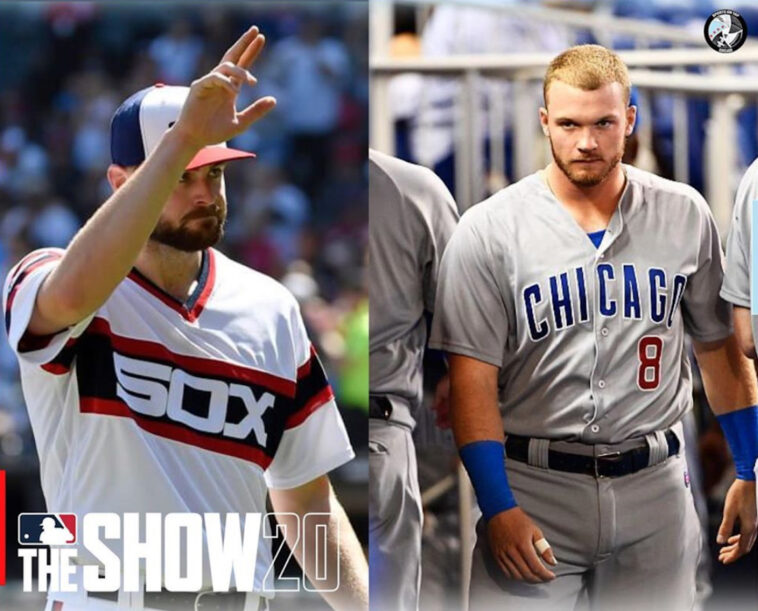 After taking down Bo Bichette in 3 games in the quarterfinals, Lucas Giolito moved on to the MLB The Show Players League Final Four.  His opponent? Ian Happ of the Cubs in an all Chicago matchup.

The Cubs-Sox series, a rematch of the 1906 World Series, was an absolute thriller, needing all three games to decide a winner.  And when I say all three games, I mean down to the last out of Game 3.

In Game 1 of the series, Giolito sent out Dallas Keuchel to face off against former White Sox pitcher Jose Quintana.  Keuchel, always the craft veteran, was able to avoid near disaster in the first, as Happ hit two balls to the warning track but had no hits or runs to show for it.

On the offensive side of the game, Giolito got going almost immediately afterwards.  Tim Anderson and Yoan Moncada had Kansas City special singles to open up the inning for the South Side.  The hit parade kept rolling through town, as Jose Abreu, Yasmani Grandal, and Eloy Jimenez all hit doubles.  When the dust cleared after the first, it was 4-0 Giolito.

Gio strikes first! The White Sox take a 4-0 lead in over Ian Happ's Cubs in the first inning of Game 1 of the MLB The Show Players league semifinal matchup#Cubs #WhiteSox #MLBTheShow #MLBPlayersLeague

Ian Happ didn’t wait too long to strike back, hitting a three run home run with the virtual version of himself in the second after a crucial Tim Anderson error on a tailor made double play ball.  Steve Cishek then came on and got out of the inning, leaving the Sox with a 4-3 lead.

Giolito then got two runs back almost immediately, with Tim Anderson and Yoan Moncada hitting back to back jacks to open the inning.  Yasmani Grandal added two more for good measure, ripping a two run homer to push the lead out to 8-3 through two innings.

The third got slightly interesting due to two dropped fly balls by Nomar Mazara and Luis Robert, but the Cubs pseudo-rally only mustered one run.  The game ended with Giolito gaining a convincing 8-4 lead to open the series, sending everyone North on the Red Line to Wrigley for Game 2.

Giolito fights off errors and a late comeback attempt to take Game 1 8-4 over Ian Happ. The series now moves to Wrigley with Giolito trying to clinch in Game 2#WhiteSox #Cubs #MLBTheShow #MLBPlayersLeague pic.twitter.com/0yICOjuhmr

Game 2 opened with the most shocking moment of the series yet – ESPN opened the broadcast with the game in the bottom of the second, again emphasizing that this was not a live stream.  Definitely an odd way to go about it, but hey I guess they only have so much time to allot to this.

In any event, the abbreviated Game 2 opened with a scoreless deadlock in the bottom of the 2nd with one out.  Given the situation I figured that meant Happ was about to score, but Giolito was able to escape the inning unscathed thanks to some clutch pitching from Jimmy Cordero.

Giolito looked to have something going to start the third, after hitting a double off the ivy with Edwin Encarnacion with one out.  Adam Engel came in to pinch run, which came in handy when Tim Anderson hit a long fly to right.  However, a slow jump off the bag cost him, as Heyward threw an absolute rope to get Engel at third to end the inning.

Jason Heyward shows off his laser and throws out Adam Engel at third to preserve the 0-0 tie going into the bottom of the third!#Cubs #WhiteSox #MLBTheShow #MLBPlayersLeague pic.twitter.com/bcL7NLQf6P

Lady Luck then started to look Happ’s way in the bottom of the third, as a routine fly ball inexplicably went past Eloy Jimenez in left, leading to runners on first and second with no outs.  Anthony Rizzo did his job next, laying down a beautiful bunt to get the runners over.  During this play, it was widely reported that Ricky Renteria shed a tear over the perfectly executed bunt.

With the game on the line, El Mago pulled out a new trick to win this one, driving in the winning run with a sacrifice fly to force a Game 3 back on the South Side.

El Mago with the walkoff sacrifice fly to send the series to Game 3, as Ian Happ squeaks out a Game 2 win. See you at 35th and Shields!#Cubs #WhiteSox #MLBTheShow #MLBPlayersLeague pic.twitter.com/q8sW38nGyX

For the second series in a row for Giolito, a pivotal third game was needed to decide the winner.  Luckily for the Virtual Sox, this one went back to 35th and Shields.

ESPN again decided that showing a whole playoff game wasn’t important, so our story of this game begins in the bottom of the first.  Giolito got the scoring going early, as Yasmani Grandal stayed hot.  The $74 million dollar man belted a two run home to get the game to 2-0 through one.

In the second, fielding woes continued to hurt Giolito as Eloy missed a routine fly from Willson Contreras that went for a double.  The top half of the second ended with the score 2-1 on a bang-bang play at home, as Luis Robert gave Jason Heyward a taste of his own medicine.

In the bottom of the second, Happ pulled Yu Darvish for Brad Wieck.  Giolito took advantage of the pitching change, as Luis Robert hit his first home run of the entire season for the Virtual Sox to get the score to 3-1 going into the last inning.

The third started just like the second, with more glitchy defensive woes rocking Giolito.  Victor Caratini hit a line drive to center that Luis Robert missed.  The joy for Happ didn’t last long though, as Robert was able to get him out going back to the bag at second.  Happ continued to drill the ball after that, ripping a double with Kris Bryant and loading the bases with one out.

Giolito then turned to his most reliable bullpen arm, Aaron Bummer, to face Kyle Schwarber.  In a duel of an at bat, Bummer struck out Schwarber on a full count to bring Ian Happ down to his last bullet.

With Willson Contreras at the plate, Giolito ended them game in the most Aaron Bummer way possible, forcing a weak groundout to end the series, game, set, and match.  As the final out was recorded, the Guaranteed Rate Field crowd broke into a frenzy.

It was a nail-biter, but @LGio27 hung on to advance to the championship series. pic.twitter.com/uv0FHlWBy5

Personally, it would have been nice for the game developers to have the playoff crowd at Guaranteed Rate Field waving black towels.  But hey, at least this gives the image of what that place will look like come October or November or December.

Lucas Giolito takes down Ian Happ in a thrilling 3 game series that came down to the final at bat! Can Gio and the Virtual Sox take home the title tomorrow?

With the victory, Giolito moves on to face Blake Snell tomorrow in the Best of 5 Championship.  Can Giolito keep the momentum going against the top seeded Snell and bring a title to the South Side?  Follow along here and on Twitter (@SONTChicago) to stay updated during the series!