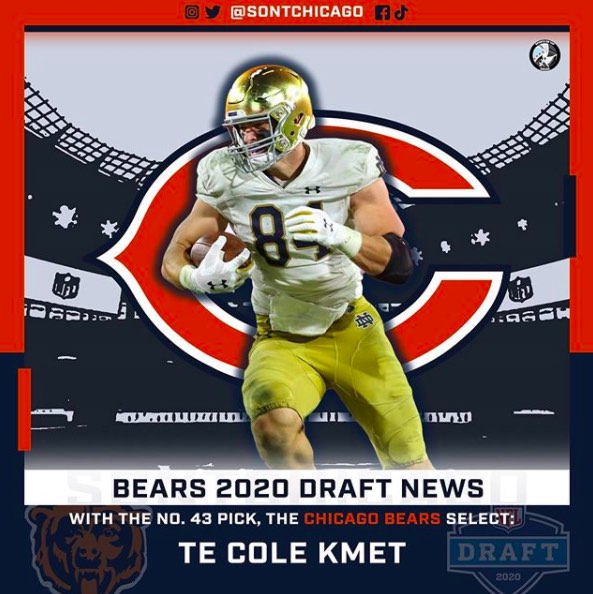 Ryan Pace is having a rough time trying to regain the trust of Bears fans. There always seems to be something to complain about. Now that the draft is officially over, fans are resorting to the confusing tight end situation brewing in Chicago. Not only is it partly last year’s tight end production that still has people fuming, but taking Cole Kmet with their first pick in the draft after just signing veteran Jimmy Graham to a two year contract now has everyone scratching their heads. Kmet is a very intriguing prospect who has huge upside potential, but spending money left and right to fill the roster might not be the smartest move. After all, the Bears currently have 10 tight ends on the roster. Yes, you read that right… 10!

Bears are out of control with tight ends

Going into the 2019 season, the Chicago Bears had six tight ends on the roster (Trey Burton, Adam Shaheen, Ben Braunecker, Bradley Sowell, Jesper Horsted and Dax Raymond). Safe to say the group did not live up to their expectations. For the first time since 1970, the Bears did not have one tight end compile 100 yards in a single game. If that doesn’t make you shake your head, I don’t know what will. It also didn’t help that our top two at the position in Burton and Shaheen missed 15 games combined. Trey Burton played 8 games and logged just 14 receptions on 24 targets for a grand total of 84 yards on the year. Not to mention, he wasn’t able to find the end zone. There was high hopes for this tight end corps going into the 2019 season as they ranked 11th, but now being ranked 29th, last year is certainly one to forget.

The money situation in Chicago is as tight as it can possibly be. After getting two players with hefty contracts (Robert Quinn and Nick Foles), there is no more money to be spent. Below shows the individual player contracts for tight ends.

The total amount of money being spent for this 2020 season to tight ends come to $17.64 million. This does not include the $8 million the Bears owe Trey Burton so that number increases to $25.64 million. 25 million dollars is a lot of money to spend on one position if you spend it wisely. This is also a big reason why Bears fans continue to show their frustration. After signing a star player in Khalil Mack, every dollar you spend there after is crucial, and this type of spending is not something fans can get behind. The 2020 season will be a huge test not only at the tight end position, but also for Ryan Pace as he hopes to still remain the Chicago Bears GM heading into the 2021 season.