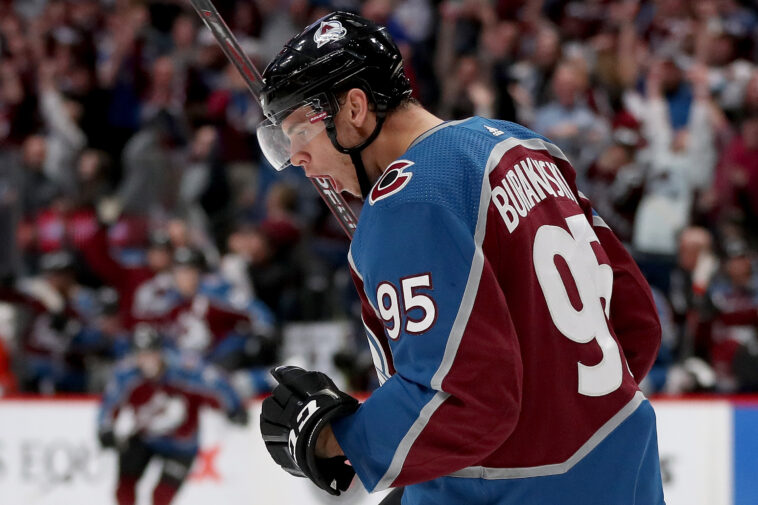 DENVER, COLORADO - OCTOBER 12: Andre Burakovsky #95 of the Colorado Avalanche celebrates scoring the wining goal against the Arizona Coyotes in overtime at the Pepsi Center on October 12, 2019 in Denver, Colorado. (Photo by Matthew Stockman/Getty Images)

The Colorado Avalanche had quite the offseason last July when free agency started, and they are continuing to reap the benefits of their trades and pickups. For a long time, fans of both Colorado and other NHL teams claimed that the Avs “lacked depth”. It made sense, but how much depth can you add in just one offseason? The answer is…quite a lot.

Swedish native Andre Burakovsky was traded to Colorado on June 28th, 2019 in exchange for a few draft picks. This was a small price to pay for a player that clearly had talent, but had been overshadowed by his previous team in Washington D.C. Burakovsky wanted to play top-six minutes with the Capitals, but there were simply too many talented players on the team. Since joining Colorado, Burakovsky has surpassed his goals, assists and points records in only 58 games played – he currently has 20 goals and 25 assists for 45 pts. He has been an excellent addition to the Avalanche playing with Nazem Kadri and Joonas Donskoi on the second line and brings Stanley Cup Playoff experience to the team. Colorado would be silly not to sign him to a contract extension.

Nazem Kadri (and Calle Rosen) joined the Colorado Avalanche in a trade that took Tyson Barrie & Alexander Kerfoot to the Toronto Maple Leafs on July 1st, 2019. Kadri had a bit of a rough season before the trade and after 10 years in Toronto he made his way to Colorado. Typically seen as a tough player who’s faced suspensions before, Kadri has maintained his composure and really seems to be flourishing in Colorado. Paired with Burakovsky and Donskoi, he’s already hit 19 goals and 17 assists for a total of 36 points. Lovingly nicknamed the “new guy line”, Kadri has been a valuable and gritty asset for the Avalanche who lacked older, more experienced players. He constantly jumps to defend his teammates, letting them know the Avalanche shouldn’t be messed with.

Donskoi spent four seasons with the San Jose Sharks before signing a 4 year, $15.6 million contract with Colorado on July 1st.  The third man on Colorado’s new guy line, he is a much-needed right shot. In just 65 games with the Avs, Donskoi has already surpassed his career-high in goals with 16 this year and managed to record his first career hat trick against the Predators! He was a good player with the Sharks, but now he has the chance to be great with the Avalanche.

Bellemare, affectionately known as Belly, was signed to a two-year deal by Colorado worth $3.6 million after having previous stints in Philadelphia and Las Vegas. One of the rare players born in France in the league, he brings leadership, experience and age to a young team. P.E. is absolutely killer on the fourth line with Matt Calvert and Matt Nieto and also brings a lighthearted, fun attitude to the locker room. He is the perfect match for Calvert in terms of grittiness and perseverance on the ice.

Probably one of my favorite pickups of the offseason last year, Nichushkin has resurrected his NHL career with the Avalanche. Colorado general manager Joe Sakic has a knack for seeing enormous potential in lesser-known players and Valeri is no exception. From going 57 games without a goal in Dallas to 12 goals and 26 points in 60 games, the Russian native has seen tremendous success with a fresh, young team. Selected in the 2013 draft at 10th overall, fans in Dallas and the NHL disregarded him as a disappointment, but he’s come back to prove himself. His contract was low risk and so far, high reward, so it’d be great to see him come back for another season with the Avs.

Is Colorado deep enough for you now, NHL fans?