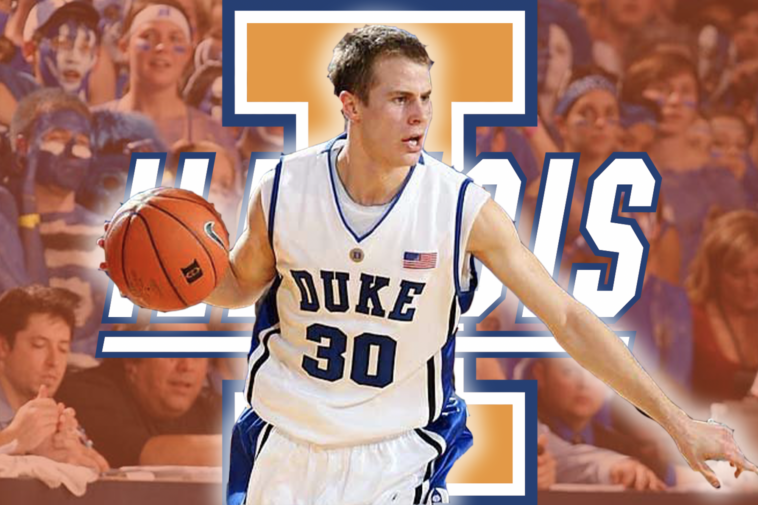 One of my favorite traditions when I was growing up was going with my dad to the Proviso West Holiday Tournament every December–widely regarded as the best tournament in the state. Over the years I was lucky enough to see some of the best players in Illinois, including Julian Wright, Kevin Dillard, Evan Turner, Jerel McNeal, and Dee and Shannon Brown. Despite the annual star-studded field, the best high school player I’ve ever seen in person–at Proviso West or anywhere–is Jon Scheyer. From the first time I saw him, a wiry freshman facing off with perennial city power Whitney Young, I was hooked. By the time his senior season rolled around, every game of his was standing room only–capped off by his legendary 21 points in 75 seconds performance.

Scheyer led Glenbrook North to a state title his junior year–a group that some national sportswriters compared to “Hoosiers” even though all five starters ended up playing in college at some level. As the state’s premier talent, everything seemed to be lining up for the “Jewish Jordan” to stay home and play for Illinois. His high school coach, Dave Weber, was then-Illinois coach Bruce Weber’s younger brother. Both Webers ran the same sets, and the prevailing notion at the time was that Scheyer would opt for familiarity and an easier transition into the college game. Illinois was also one of the hottest programs in the country at the time–making a run to the title game in Scheyer’s junior year of high school.

Of course, Coach K was relentless in his recruitment of Scheyer (the Glenbrook North connection with assistant coach Chris Collins didn’t hurt)–and the rest is history. Scheyer went on to become a consensus All-American at Duke, leading the Blue Devils to two ACC titles and a national championship. After whiffing on Scheyer, Weber would win just one more NCAA tournament game with the Illini before being fired in 2012. Illinois was forced to slog through the John Groce era and a few painful years under Brad Underwood before finally looking like it turned a corner this past season.

Which leads us to the the point of this–what if Scheyer had elected to stay home and play for Illinois?

The obvious winner here is Weber for a few reasons. Even during the 2005 tournament run, critics would say that Weber was the beneficiary of Bill Self’s players. These critics grew louder during the dramatic drop-off after final holdovers Dee Brown and James Augustine graduated. Having a program-changing player like Scheyer would have helped smooth the transition and kept Illinois nationally prominent. Adding Scheyer to the group the Illini already had would have led to four NCAA tournament appearances, and I’d be willing to bet at least two second weekend (or later) runs.

Long term, landing Scheyer would have done wonders for Weber’s recruiting. As with any basketball-rich state, Illinois fans desperately want the state’s five stars to stay home and suit up in orange. But Weber swung and missed on Scheyer and Sherron Collins in the same class, leading to a string of notable misses over the rest of his tenure, including Derrick Rose. Landing Scheyer would have earned some much-needed confidence in Weber from the state’s high school coaches, and would have paved the way for future five stars to do the same. In any coaching tenure there’s one elite recruit who has to set the tone and stay home–Ayo Dosunmu was that guy for Underwood –but the closest thing Weber ever got was Meyers Leonard (far too late for it to make a difference). Weber was able to snag solid three and four star talent from the Chicago area, but results varied after guys actually showed up on campus and there was never that top-tier talent that can take a program from good to elite. I’m not saying that Weber is still coaching in Champaign if he lands Scheyer, but it’s definitely worth considering.

In this hypothetical, Duke would still be Duke with one major tweak. Coach K doesn’t win the 2010 national championship, of course, but I think he also would be quicker to embrace the one-and-done era. Duke didn’t really go down that path in earnest until Kyrie Irving came along, but with no Scheyer and Duke not being quite as nationally prominent Coach K almost certainly would have changed things up sooner to get his program back to where he felt they should be.

The good news is everything worked out in the long run for all parties. Scheyer is a Duke legend and is now an associate head coach at his alma mater, where he added another national championship to his resume in 2015. He has done a masterful job developing the next generation of elite Duke guards, including Tyus Jones, Luke Kennard, Frank Jackson, Grayson Allen, and Tre Jones.

After his departure from Illinois, Weber landed on his feet in the Little Apple. He has guided Kansas State to five NCAA tournaments in eight years, a share of two Big 12 titles, and an Elite Eight run in 2018.

And as mentioned before, Illinois basketball appears to finally be back under Underwood. The team would have made the tournament this year if coronavirus wasn’t a thing, and it looks like the program is getting to the point where it will be contending for a tournament bid on an annual basis.

But if one commitment went the other way in the spring of 2005, the college basketball landscape would have taken a very different path.