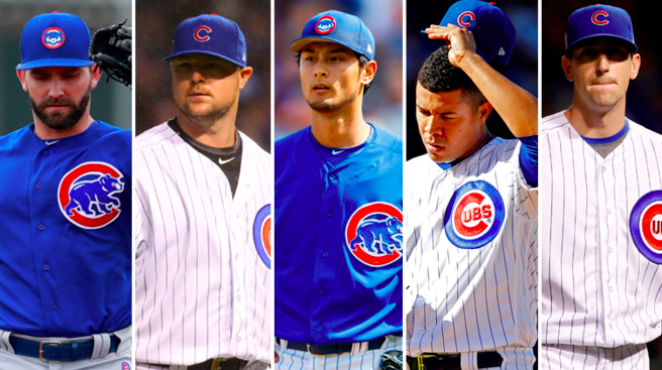 The Chicago Cubs starting rotation heading into the 2020 season stands as a question mark. Whether they can pitch to a winning record or if they can just stay healthy, many Chicago fans are wondering if this is a rotation capable of pitching this team to a playoff birth. The 2019 season was certainly one to forget. Joe Maddon and company believed they were heading into the season with three potential aces (Jon Lester, Yu Darvish and Kyle Hendricks) and came out with zero. Aside from the fact Yu Darvish had an excellent second half, he still has yet to prove himself in a full season wearing a Cubs uniform.

Many factors can be used to evaluate the potential of the 2020 Chicago Cubs rotation. In this case, each starter will be evaluated by three categories:

2019 Statistics, their individual contracts and their career reputation.

As the 5th starter is yet to be named, the four starters already set (Jon Lester, Yu Darvish, Kyle Hendricks and Jose Quintana) with be evaluated.

Jon Lester – There have been so many great pitchers that have played in a Cubs uniform. If there was one winner take all game, and I can choose any starter in Cubs history, I have Jonathan Tyler Lester taking the bump. Ole Reliable has pitched to a tune of 170+ innings since 2008 and has an incredible track record in the postseason.

Yu Darvish – Take away his 2017 postseason and 2018 regular season and Yu Darvish would be considered one of the most consistent arms in baseball. Of course, that’s not how baseball works. One bad year can subside your reputation greatly and Yu Darvish will look to get back on track to being the sub 4.00 ERA pitcher that he was.

Kyle Hendricks – The most consistent arm this organization has had since he came into the league in 2014. Not only does his highest ERA stand at just 3.95, but he also has not had a season where his WHIP exceeded 1.20 (league average each year stands roughly between 1.29 and 1.35). Kyle Hendricks is everything you want in a starting pitcher aside from his 87 MPH heater.

Jon Lester had a very mediocre year in 2019. Some fans might say it was below average, but to say Jon Lester can’t turn it around in 2020 would be foolish. He has had multiple off years followed by great ones. In 2012 he recorded a 4.82 ERA, followed it up with a 3.75 ERA in 2013 and then decreased even more to a 2.46 ERA in 2014 before signing a 6 year extension with the Cubs. He did it again in 2017 with a 4.33 ERA and improved to a 3.32 ERA in 2018. Lester’s contract is up after this year if the organization does not pick up his option, but Jon Lester is a man who doesn’t take no for an answer and he will be back to prove himself again in his contract year.

There is no trying to sugar coat Yu Darvish’s 2017 postseason and 2018 season, not to mention the first half of 2019. It simply was not what the Cubs were looking for when they signed him to a 6 year $126 million contract going into the 2018 season. In my opinion, I would toss that all away and not think about it, because Yu Darvish’s second half last year was something to be extremely excited about. April through June, Darvish recorded a 4.98 ERA, but when the second half rolled around, he pitched to a tune of a 2.97 ERA from July to September. The pure second half date actually does not include Yu’s rough start against the Pirates on July 3rd, so his true second half ERA stands at 2.76! Darvish did rank 3rd in the NL in HBP and we all know his one problem is control so if he gets his confidence back just like he did in the second half, we have a potential ace in our rotation.

Kyle Hendricks is Kyle Hendricks. A pure, consistent starter who can be relied on to throw seven  innings and let up three or less. There isn’t much else to say about him other than the fact that he needs be under control. When his 86-88 mph fastball and changeup start to rise up in the zone, that is when he has problems. He usually does not walk too many batters as his career walks per 9 innings pitched ratio is 2.03 so if he continues to be the Kyle Hendricks we all know, we are in good shape.

Jose Quintana will always be remembered as the guy we got in exchange for Eloy Jimenez and Dylan Cease partly because of the work he has done here on the north side. If he had maybe a 3.50 ERA with 180 innings pitched each year, it would be different, but giving up two highly touted prospects for basically an average starter is something Cubs fans will always hold on to. Jose Quintana’s contract is up after this season so it will be interesting to see which direction the organization plans to go to and if he proves to be the starter we all wanted.

As of right now, Tyler Chatwood, Alec Mills, and Adbert Alzolay are the primary candidates. If I were to pick who I think David Ross will choose as his fifth guy, I would say Tyler Chatwood for a few reasons. He has the biggest sample size. Alec Mills has less than 60 MLB innings under his belt and Alzolay has 12.1 IP. Although Alec Mills had a respectable year last year, Tyler Chatwood saw the most time out of the bullpen and improved greatly from his 5.3 ERA in 2018 to a 3.76 ERA in 2019. His WHIP also improved from a horrific 1.8 to a league average 1.33. This is also the last year on Chatwood’s contract, so he could be looking to prove himself to get paid in next years free agency.