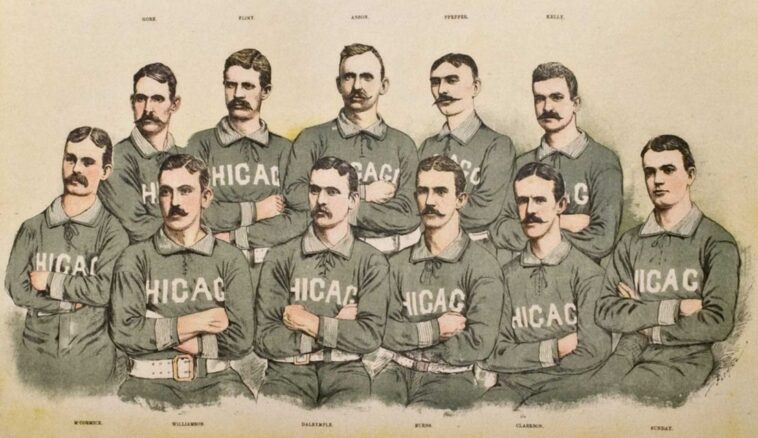 The Shoeless Goat Podcast is here to help you get through your quarantine by proudly hosting the Crosstown Centurion. It will consist of a 32 team bracket to determine which Chicago baseball team is in fact the greatest of all time. The bracket is broken up into two sections, one for each team. The greatest Cubs team and White Sox teams will then face off in the Championship to determine the Crosstown Centurion. Each matchup consists of a best of 7 simulated series. All rosters will be left the same for each game but the starting pitchers will obviously be rotated accordingly. May the best team win!

The tournament will consist of best of 7 matchups for each round. Each team will have its own region, with the White Sox and Cubs winners facing off for the title. Stay tuned for more details on the Selection Show episode!

This one was a no-brainer given the longevity of the championship drought.  Led by MVP Kris Bryant, Anthony Rizzo, and Jon Lester, the 2016 Cubs finally broke the 108-year curse of the Billy Goat. The rotational depth of Jon Lester, Jake Arietta, Kyle Hendricks, and Jon Lackey is only rivaled by a backend bullpen of Pedro Strop, Hector Rondon, and Aroldis Chapman. Expect a deep run at the very least.

The record alone explains why the 1906 Cubs were seeded so high. The only blemish is the Championship loss to the White Sox. 5 of the 6 starting pitchers on this staff, led by Mordecai Brown, had an ERA under 2! In the heart of the Dead Ball Era, this team lacks power. It will be interesting to see how this impacts the simulations.

Speaking of broken streaks, the 1984 Cubs ended a playoff drought that went all the way back to 1945. Second-baseman Ryne Sandberg won the MVP, Batting Title, and Silver Slugger. Starting Pitching Rick Sutcliffe won the Cy Young. And Lee Smith dominated the 9th recording 33 saves. Unfortunately, their luck ran out when the ran into a Padres team that had their number, losing 3-2 in the NLCS.

The roster didn’t change much from 1906 but the end result did as the Cubs won their first World Series against the Detroit Tigers.  Despite the Championship, I had them lower than the 1906 team considering they had 9 fewer wins. If the simulation takes championships into effect these two early 20th century teams could easily be flipped.

The second Cubs team to win the division in the 1980s was the 89 Cubs. The emergence of Greg Maddux and Mark Grace made this team a force and will surely play in their favor during the simulations. The 1989 Cubs fell short to the eventual Giants on their way to a quaky World Series against Oakland.

The 1969 Cubs are often referred to as the greatest team to get 2nd place. Despite their late-summer collapse, they still had 4 eventual Hall of Famers on their roster in Billy Williams, Ernie Banks, Ron Santo, and Fergie Jenkins and a Hall of Fame manager in Leo Durocher. This team is my dark-horse pick to win it all.

The 1945 Cubs were eventually cursed by a crazy man and his pet goat. You would never know by looking at their stats. Stan Hack hit a stifling .323 while the entire pitching staff was in the double digits in the win column.  The 7 seed is always dangerous and this team is no exception.

Not as dominant as the 1907 or 1906 squads, but good enough to clinch the back to back titles. It will be interesting to see if any of the 1906-1908 teams face off against none other than themselves.

This 2015 team was the most exciting team in recent memory simply because they weren’t expected to do as well as they did. Jake Arietta posted arguably the best second half in baseball history earning him the CY Young to go along with his no-hitter against the Dodgers. They did, however, get 3rd in their division against behind stacked Pirates and Cardinals teams. Their dominance against those squads in the playoffs gave them a significant boost in the seeding.

The 1935 Cubs were unable to get past the Tigers in the World Series but they have arguably the best star power in the bracket. 10x All-Star Billy Herman led baseball with 227 hits and 57 doubles while accruing a 7 WAR. Augie Gallan led the team batting .399. This along with 3 starting pitchers that ground out 240+ innings is a recipe for success in the Crosstown Centurion.

The 1932 Cubs are best known for losing to Babe Ruth in the World Series. Yes, the called shot World Series. The roster make-up is similar to the 1935 team but a 3 year years younger Lon Warneke could be the difference in a close game or two.

The 12-5 Matchup is always primed for an upset and this tournament is no exception. The 2003 Cubs took the league by storm with a young fire-balling pitching staff and a bevy of power hitters. Sammy Sosa, Kerry Wood, and Mark Prior have the capacity to silence any opponent in this tournament as long as the shortstop position remains error-free.

The 2017 Cubs did their best to prove future White Sox pitcher Dallas Keuchel wrong when it comes to World Series Hangovers. The departure of Aroldis Chapman was filled with Wade Davis in an astounding fashion while youngsters Willson and Contreras and Javier Baez came into their own. The mid-season acquisition of Jose Quintana proved the fans that 1 championship was not enough.

The 1885 Cubs weren’t actually the Cubs just yet. They were actually the Chicago White Stockings. For their time, this team flat out dominated with a .777 win percentage. Starting pitcher John Clarkson went 53-16 with a 1.85 ERA and posted a 12.8 WAR.  All that winning did not lead to a Championship as they TIED the series against the St. Louis Browns (3-3-1). I can assure you there will be no ties in the Crosstown Centurion given the 1885 White Stockings a chance to redeem themselves.

This team had everyone believing again as “Next Year is Here” signs flooded the North Side. After 100 years of waiting, this squad led by Derek Lee, Alfonso Soriano, and Ryan Dempster looked to be the team of destiny. Manny Ramirez and the Dodgers had different ideas come playoff time. Regardless this team can make some noise but have a huge test in the first round against the 116 game winners of 1906.

There were a few World Series losing teams that missed out on this last spot. The biggest reason for that is the stellar play of Sammy Sosa in his prime. His home run race with Mark McGwire is often credited with saving the league. Sammy’s role would have been less credible had this team not made the playoffs. It took a 163rd game to get it done but the Wild Card was theirs. Sammy Sosa against Aroldis Chapman in the 9th is what the fans came to see!