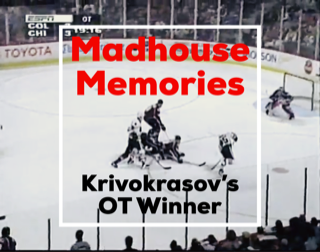 Let me begin the first installment of Unsung Madhouse Memories by giving the genesis of the series and extending a very quick thank-you. While this is my first article regarding unsung moments in Blackhawks history, it is also my first post as a new member of the Sports ON Tap family. I want to thank everyone involved with the SONT team for rewarding a few years of hard work by the Let Me B-Frank team in Chicago, as well as podcasts of ours which include the Go With the Flow – NHL Podcast, by welcoming us into their family and investing in a Chicago branch.

While the Blackhawks are most likely facing an abrupt end to a third straight season without a playoff berth, there have been plenty of downs, but certainly a plethora of ups in the past three completed decades. Certain moments get most of the shine in recent Blackhawks history (and for good reason). Fans are very familiar with classic moments such as Patrick Kane’s hat trick against Vancouver in 2009, him ending the 49-year Cup drought in Philadelphia the next season, “17 seconds,” Jonathan Toews-to-Kane in double-OT to go to the Cup that same year, Brad Richards-to-Kane to seal the deal in ’15, Duncan Keith carrying the defensive corps en route to a Conn Smythe, etc.

However, there are lots of forgotten moments in Blackhawks history that don’t always get the shine. That can be for many reasons: maybe they didn’t win the Cup that year, unfortunate events immediately followed, a play wasn’t made by a marquee guy, or hell, there’s just been too much good stuff to remember everything.

Well, I wanted to give some attention to some memorable plays that don’t always get the hoopla. This is a franchise that’s been around since 1926 with lots of success, especially within the last 12 years, so naturally some fun moments have gotten overshadowed. I’m going to rewind things back to 1996 to start.

The 1995-96 Colorado Avalanche were an absolute wagon. In their first season after relocating to Denver from Quebec City, this was a roster filled with the likes of Joe Sakic, Peter Forsberg, Sandis Ozolinsh, Adam Foote, Claude Lemieux, and Patrick Roy just to name a few. The eventual-Stanley Cup winners were a force to be reckoned with, led by now-Blackhawks assistant Marc Crawford behind the bench. This bunch even had some additional veteran leadership from former Blackhawks legend and 1986 Selke winner Troy Murray in his final NHL season.

The 1996 Western Conference Semifinal got off to a hot start for Chicago, with Jeremy Roenick netting an overtime winner on the road to kick off the series. After the Avalanche thoroughly took care of the Hawks by a score of 5-1 in Game 2, the series shifted to Chicago.

In Game 3, the Blackhawks’ second-leading scorer in the regular season Tony Amonte was knocked out of the series by Foote with a knee injury.

Head coach Craig Hartsburg promoted Russian forward Sergei Krivokrasov to the top line to play with Eric Daze and Jeremy Roenick. With Amonte’s injury looming large for Chicago’s chances in the series, Krivo stepped up to rally his team in overtime.

This led to a pretty funny exchange between Jeremy Roenick and Patrick Roy in the media. Roenick was upset about not being given a penalty shot in the game after a pretty blatant trip on a breakaway by Ozolinsh, and Roy – frustrated with his play in the series – fired back with a few classic chirps of his own.

This series is often forgotten or rarely discussed in Blackhawks lore for many reasons. The Blackhawks went on the lose three straight games to lose the series 4-2, with the series clincher happening on United Center ice in overtime of Game 6. It was also smack dab in the middle of Bill Wirtz’ reign of terror as owner, plus Patrick Roy ultimately got the last laugh, winning the series and his third of four Stanley Cups.

All in all, Krivokrasov’s signature moment in the indianhead will be giving the fan base hope with a fortuitous goal in Game 3. It’s easily one of the best moments of the 1990s decade for an Original Six franchise.