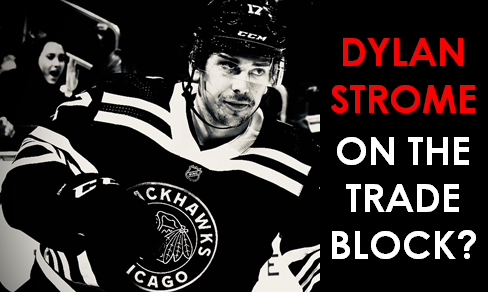 Elliotte Friedman on WGR550 The Instigators on Thursday said the Chicago #Blackhawks have Dylan Strome available for trade, and that he "doesn't think the cost is really prohibitive." Repeated it twice for good measure.

The NHL, like all other sports, has been on a hiatus, so it’s interesting to hear trade rumors of this magnitude from such a credible and well-respected source like Friedman. So let’s dive into things.

In what was a classic “change of scenery” trade last season, Blackhawks general manager Stan Bowman bought low on Strome, giving his team yet another third-overall pick at the center ice position to slot in behind Jonathan Toews down the middle. The two were later joined by Kirby Dach (who also spent time on the wing) this season, who also was picked third in the draft after some lottery balls falling Chicago’s way.

Prior to arriving in Chicago in November 2018, Strome tallied only three goals and three assists in 20 games for the Coyotes. Coyotes general manager John Chayka still decided to flip Strome, a former draft pick of his, for more speed and essentially gave up on Strome at only 21 years old. Strome seemed to be motivated and rejuvenated by his arrival in Chicago and the opportunity to play with former Erie Otters (OHL) junior teammate Alex DeBrincat. Strome contributed mightily to the Blackhawks’ second half surge, notching 17 goals and 34 assists (51 points) in 58 games. With Strome entering the final year of his entry-level contract (ELC) which came in at a $863,333 annual average value (AAV), it was speculated throughout the offseason he could sign an extension – either long-term or a bridge deal – after a positive beginning to his tenure with the organization. After tucking 41 goals in 2019, DeBrincat ended up extending for three years at a $6.4 million AAV earlier this season, as he was also in the final year of his ELC.

Strome entered the 2019-2020 campaign without a new deal in tow, and this season was a bit more shaky than the last. He missed time this season with both an ankle sprain and a concussion, and he was healthy scratched by head coach Jeremy Colliton for the first time since arriving in Chicago in mid-February. Coincidentally, Strome also played the same number of games this year (58) as last with the Hawks but saw a dip in production, going from 51 to 38 points and playing on all four lines as part of the Colliton line blender.

Owner Rocky Wirtz has already made it clear Bowman and Colliton are returning to begin the 2020-21 season, but it should shock no one that Bowman is looking to upgrade the roster after what appears to be three straight years without a postseason berth. However, I find this to be a bit of an odd time to potentially deal Strome.

He is a restricted free agent, and successful offer sheets are rare in the NHL, as it takes two sides to tango. With a dip in production and after signing his linemate DeBrincat at a reasonable clip, the Blackhawks have a lot of leverage in contract negotiations. What I’m curious of is if Strome and his camp would prefer a bridge deal since he just turned 23 last month and could earn more on a long-term contract with an uptick in production during the short term. Bowman would also be selling low on him in a potential move, but of course not at as low of perceived value as when Chayka pulled the trigger.

I find it unlikely that Chicago deals him, but obviously no player is untouchable. It’s reasonable for Stan to see if a team is willing to give an overpayment for a cost-effective center iceman with strong playmaking ability. Strome can be limited by his skating ability at times which doesn’t make him a system fit for some teams across the league. I’d be interested to know if the lack of foot speed in Strome’s game is catching the ire of Colliton, whose run-and-gun system is very uptempo; however, that is just personal speculation.

The possibility also still exists – although who knows how likely – that Strome could have the opportunity to finish the regular season on a personal high note and raise his trade value even further or make Chicago’s front office more willing to extend the player. I would welcome back Strome at a team-friendly rate with open arms, as I feel this season was a bit of a lost one for him with injury as one of the primary reasons. It’ll be interesting to keep an eye on this and see if anything develops moving into the summer.