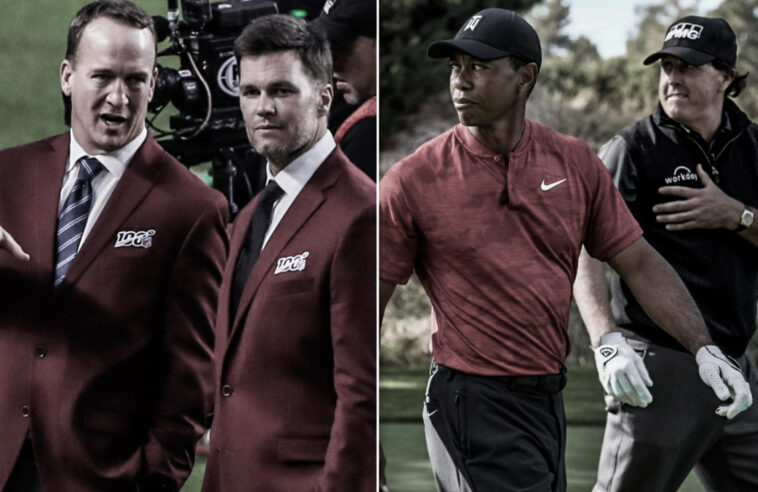 CNBC– NFL icons Tom Brady and Peyton Manning will join superstars Tiger Woods and Phil Mickelson in a golf match organized by AT&T’s WarnerMedia and the PGA Tour, a person familiar with the negotiations confirmed to CNBC. The match pitting Mickelson-Brady against Woods-Manning would be a rare sporting event in the wake of the coronavirus pandemic, which has spurred game cancellations and suspensions across professional sports.

The person, who requested to not be identified as negotiations are stilling being finalized, said the event would likely happen in May and would benefit charity. Though nothing is official, the event could take place live on Turner Sports’ TNT channel or elsewhere in the WarnerMedia company, but its unlikely to be featured on pay-per-view. News that Brady and Manning could participate in the event was first reported by golf journalist Robert Lusetich. Officials coordinating the event also plan to feature stars throughout the PGA, NFL, and National Basketball Association. That would include Hall of Famer Charles Barkley, who currently serves as an NBA on TNT studio analyst, for off-site guest commentary.

Tiger Woods, Phil Mickelson coronavirus relief golf match is on and could happen in May https://t.co/fkoCHDWbX4

This is not an April Fools joke. This is happening and could happen as soon as May. Tiger woods and Phil biggest rivals in golf in our lifetime. Brady vs Manning the biggest rivals in football during our lifetime. I am a huge Woods guy and a big Brady guy so please put those two together. Two big winners. And Phil and Manning sure I like them but they don’t match the winning and clutch genes that Brady and Woods have. So let’s get this thing rolling. At a time where there would be no sports this would be an absolute epic and fun event to have.