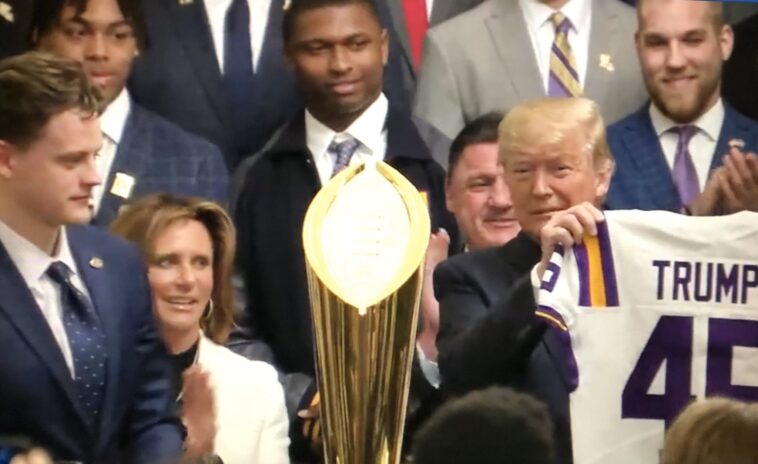 LSU continued their tour after The National Championship by visiting The White House on Friday. And Donald Trump stole the show with multiple quotes. Let’s go through some of our favorites.

First he of course had to mention his impeachment:

Donald Trump was on fire during LSU’s White House visit ???

Trump then proved that he was a true #FootballGuy:

President Donald Trump says he respects football players more than politicians as he welcomes the LSU team to the White House after winning the national title.

Donald Trump then went on to say Joe Burrow was going to be so rich and is a young Tom Brady:

Donald Trump said “Joe Burrow is going to be so rich” ? actually a factual statement

He was later presented with a jersey and said he thought Joe Burrow was going to give him a Hesiman trophy:

LSU Quarterback @Joe_Burrow10 speaks at the White House and presents President Trump with a jersey.

TRUMP: "I thought he was going to give me the Heisman Trophy." pic.twitter.com/0OeluUeTBG

Trump just called Joe Burrow a young Tom Brady and said he talked to Bill Belichick about Orgeron and Belichick has a lot of respect for Ed Orgeron. #LSU pic.twitter.com/YhhO2Y8mOy

Look at LSU's faces after he says (for real)

I mean Donald Trump used this as a time to show off his stand up comedy skills. There is still now word on whether or not fast food was served.