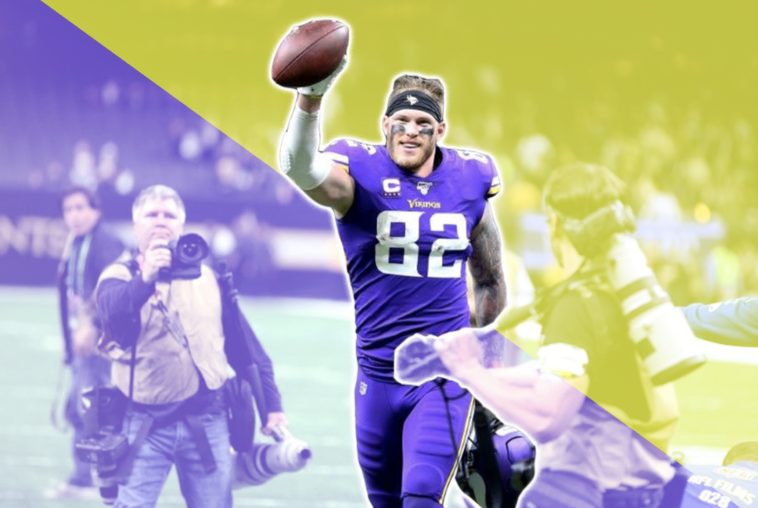 Kyle Rudolph and the Minnesota Vikings were coming off an amazing day on Sunday, beating the New Orleans Saints in the playoffs, on the road. After the game he donated his game worn gloves and signed them when a reporter asked if they can go to a charity. Rudolph, of course, thought that would be an awesome idea… the reporter didn’t have good intentions.

I saw this.. it’s disappointing. A member of the media in the locker room after the game asked if he could have my gloves for a charity benefit, so I said of course and I will even sign them for you! Well he got me, sold on eBay 3 days later.. https://t.co/JCTO0OWM5n

Rudolph learned of the sale after a social media user pointed out the gloves on the online marketplace eBay, which regularly sees sports memorabilia listed for sale. A screenshot of the eBay listing showed the autographed gloves were sold for $375.50.

Rudolph said he did not know who requested the gloves and it was unclear who posted the apparel to eBay, which did not immediately respond to a request for comment. The saga saw a satisfying twist, however, after another Twitter user responded saying he had purchased the gloves and offered to donate them after learning of their origins.

“I’m the guy who bought them. I will gladly donate to a charity of your choice,” tweeted Jason King (@kingy1940).

“Hey Jason, really cool of you to do this!” Rudolph wrote in return. “@UMNChildrens will greatly appreciate it and I will make sure to get you my pair from this weekends game!”

A good story, took a bad twist, and then turned back into a winning situation for all parties… Except this crappy reporter…