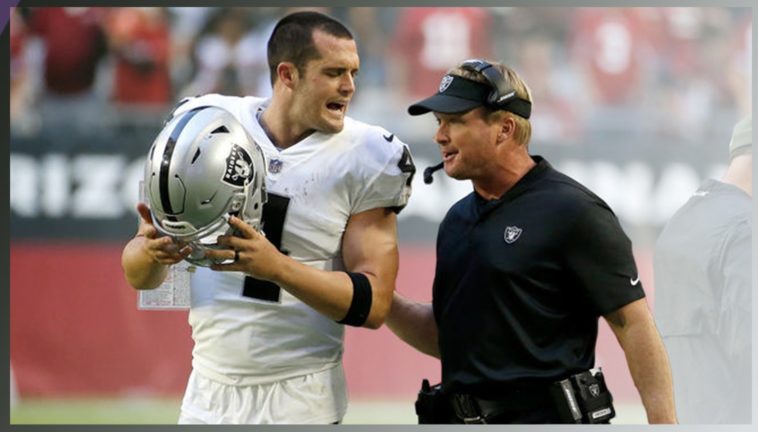 This has been an interesting season to say the least for the Oakland Raiders. This is their last year in Oakland, about to head to Las Vegas and the drama has been around the team all year long. Starting off with HBO Hard Knocks, which always reveals more negative than positive, and then Antonio Brown being cut, after being their blockbuster acquisition over the offseason.

Well things aren’t getting better. The Raiders blew a lead during their last game ever in Oakland and now the rumors have begun… A disconnect between head coach Jon Gruden and QB Derek Carr.

Asked what type of QB he prefers, #Raiders HC Jon Gruden provided a description that sounds little like Derek Carr:

"I'm getting old now. I want to let it fly. I want big plays. I want excitement. These bubble screens and checkdowns only go so far with me."

Could Oakland choose to move on from quarterback Derek Carr? His inability to improvise and his propensity to check down handcuffed the Raiders’ offense throughout the back-end of the season and led the Silver and Black faithful to send the quarterback off the field with a chorus of jeers and boos.

It appears there might be a “significant disconnect” between Carr and head coach Jon Gruden, The Athletic’s Michael Lombardi reported Monday.

Lombardi is a more reliable source than most, as the former Browns’ general manager worked with the Raiders from 1998-2007 as a Senior Personnel Executive, overlapping with Gruden’s entire first tenure in Oakland.

“Still, having been around Gruden for many of those good years in Oakland,” Lombardi writes. “I know what he loves in quarterbacks: the toughness, the grit, the willingness to sacrifice, and most of a competitive drive to match his own. Carr makes too many mistakes with the ball, and whether it’s a fair assessment of his ability or not, he never displays the fire that would remind anyone of former quarterback Rich Gannon.”