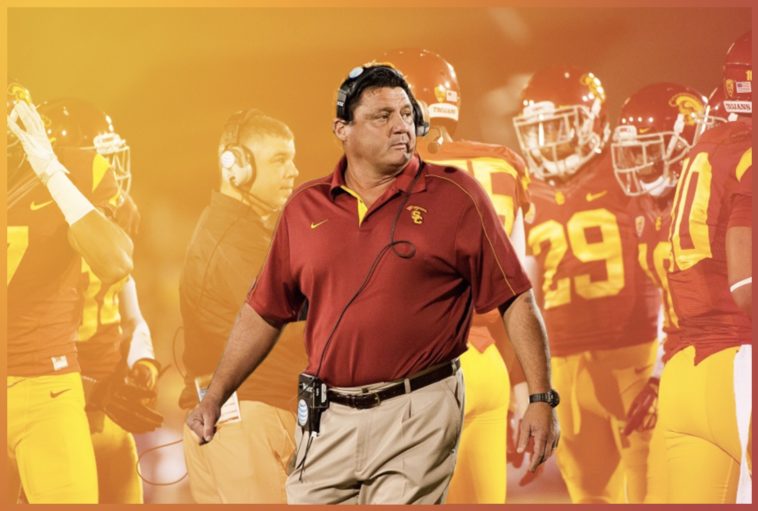 There is a lot of finger-pointing and “what if” game-playing going on around USC’s decision to pass over Ed Orgeron for the USC head coaching job in 2013 these days.

Not that it’s unwarranted. The former Trojan interim and now LSU head coach has his Tigers ranked No. 1 in the country after an undefeated season in the SEC while USC is on the way to the Holiday after another letdown of a season under Clay Helton.

Bruce Feldman of The Athletic only poured fuel on the fire on Monday when he went on the Rich Eisen Show and described his understanding of how the Trojans came to the decision to let Orgeron walk. Specifically, Feldman said certain people in the Pat Haden administration “couldn’t get past what Ed Orgeron sounded like.”

How did #USC miss so badly on Coach O and why did they decide to keep Clay Helton?@BruceFeldmanCFB dropped knowledge: pic.twitter.com/O5cgMLqVwy

Feldman went on to point out how many familiar Trojan faces have now followed Orgeron to LSU. Heisman Trophy winner Marcus Allen spoke to the Tigers before their game against Texas A&M. National title-winning head coach John Robinson is employed as a consultant by LSU.

“You see so many guys who understand what Ed Orgeron is way better than Pat Haden ever did and that’s why USC is where USC is right now and LSU is the No. 1 seed going into the playoff,” said Feldman.