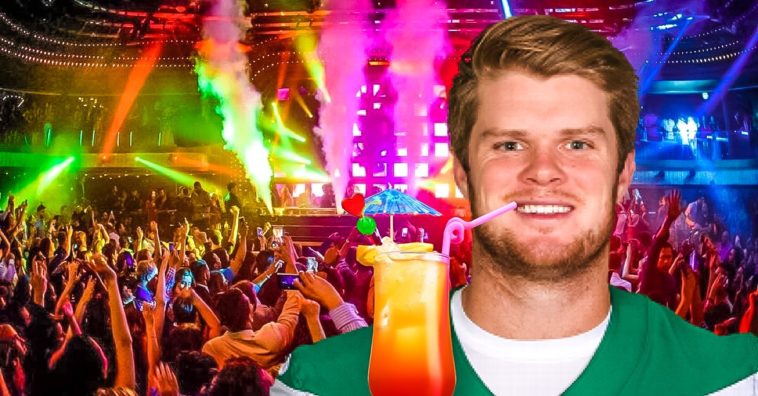 Well if you thought that maybe Sam Darnold could be the next Joe Namath or Mark Sanchez of Jet’s QB who party too hard, they might have him on the right track:

Source: Surging New York Jets quarterback Darnold celebrated his team’s Sunday afternoon routing of the Raiders long into the night — but he may have taken on a little too much “jet fuel,” sources tell Page Six.We’re told that Bounce Sporting Club in the Flatiron District hosted Darnold and his teammates after they walloped the Oakland Raiders 34-3 at MetLife Stadium.

“They were celebrating like they’d just won the Super Bowl,” said a spy on the scene. “Sam Darnold was wasted, hooking up with some girl. The other guys on the team had to [look after] him.”“[There was] a limo driving him and the players around all night,” added the source.

We had many Sam Darnold mono jokes writing themselves this year but hey maybe the jokes were true. Maybe Sam Darnold parties hard, kisses girls like a young high school man and gets mono? It could be possible. Was this his girlfriend?

Source: We’re told Darnold ducked out at about 12:30 a.m. Monday, but the rest of the team partied on.

Darnold had been romantically linked to a fellow student at USC, which he left to play for the Jets in 2018. Heavy.com reports that it’s unclear if they’re still together: “Darnold has not posted a photo with [her] since 2017 when the couple attended a wedding together.” Another insider told Page Six that they don’t believe the rising star has a girlfriend.

How big of a deal is this? It can’t be that big. First of all it’s New York. Second of all, we are living in the day of age where social media waits to bounce on any story. And the interesting thing here is there is no video evidence that has surfaced. Did Sam party too hard? Maybe. Does it matter? Possibly. But imagining being a QB in New York. It’s possible many of us would be doing the same thing too.