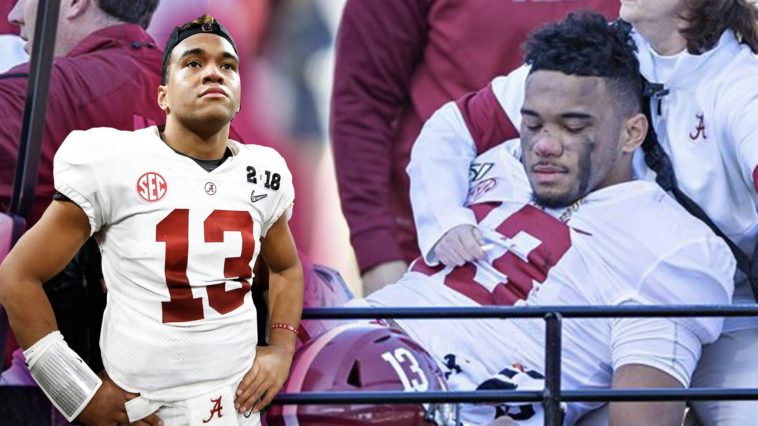 A heartbreaking scene unfolded late during the second quarter of Mississippi State’s game against Alabama. The Crimson Tide quarterback, crushed underneath two Bulldog bodies, was unable to stand upright. He injured his right hip and he suffered what appeared to be a laceration to his nose or mouth. Alabama staff members, one on each arm, held him upright while another covered his face with a towel, soaking up blood, tears and painful screams that were loud enough to be heard by ESPN sideline reporter Molly McGrath. Unable to walk, he loaded into a medical cart, curled into a fetal position and was gone.

Alabama quarterback Tua Tagovailoa will miss the remainder of this season after suffering a dislocated right hip Saturday in the 38-7 win over Mississippi State, Alabama orthopedic surgeon Dr. Lyle Cain said in a statement.

Tagovailoa also suffered a posterior wall fracture, sources confirmed, and medical officials are continuing to evaluate his injury to determine the best course of treatment. He is expected to make a full recovery, Cain said.

This isn’t fun for Tua…. pic.twitter.com/mqUcszoGyM

“He was screaming in pain”

Tua has been taken by a helicopter to St. Vincent's Medical Center in Birmingham for a hip injury….. pic.twitter.com/EpSdXhCN9o