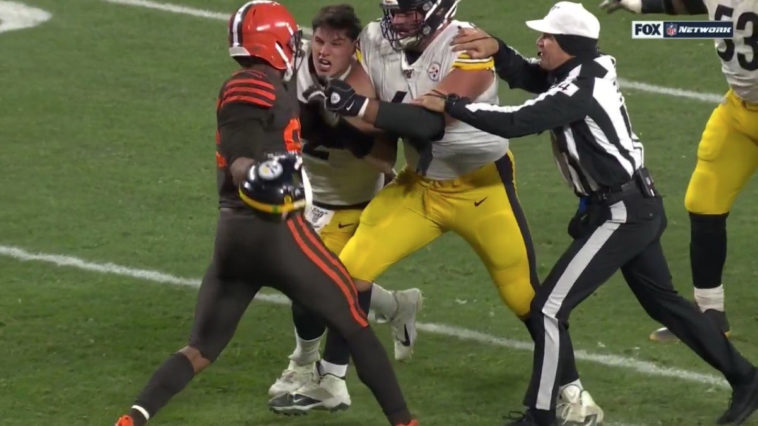 Myles Garrett and Mason Rudolph sparked a huge brawl at the end of the Cleveland Browns, Pittsburgh Steelers game Thursday night. It was an ugly scene where a number of players were throwing punches and taking cheap shots.

On one of the last plays of the game, Garrett took Rudolph down to the turf after the young quarterback released a pass. Rudolph took exception to the hit and pawed at Garrett’s helmet. Garrett responded by lifting Rudolph off the ground by his helmet, ripping the helmet off and swinging it at him.

I already hated The Cleveland Browns but seriously fuck Myles Garrett suspend him for the year. Takes Mason Rudolph’s helmet and uses it as a weapon. That’s bullshit #CLEvsPIT #Browns #BrownsVsSteelers #SteelerNation pic.twitter.com/IQ43BxeEKn

A brawl broke out between the Browns and the Steelers ? pic.twitter.com/wjIRToY5ht

Myles Garrett should be SUSPENDED FOR THE REST OF THE YEAR. Piece of shit. That’s beyond football you’re a bad human. Rudolph almost died from a head injury and you do that. Idiot.

Many believe this could end Myles Garretts season to suspension…