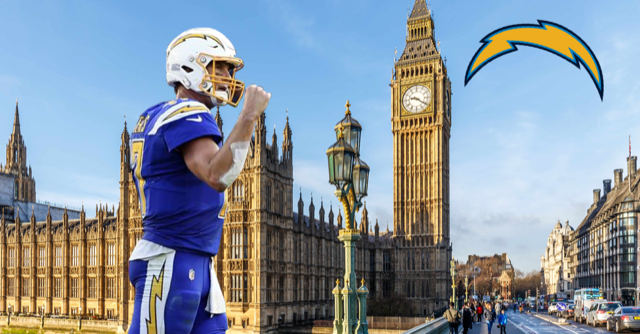 Thought the move from San Diego to Los Angeles was a bit of a risk for The Los Angeles Chargers. Well how about a move to London? Sounds impossible, right? Well no it’s a possibility. And a real possibility according to The Ahtletic:

The Athletic – The Athletic has learned through NFL sources that the possibility of the Chargers moving to London has been broached among league personnel. The Athletic also has learned that, while the team is fully committed to Los Angeles where it will move into the new $4.5 billion stadium with the Rams next year, the Chargers would at least listen if the NFL approached them about London as a possible option.

Finally, The Athletic has learned that NFL owners are concerned enough about the Chargers’ situation in L.A., where a crowded sports market and the presence of the more established Rams has resulted in a tepid embracement of the Chargers, that they would provide the necessary support for a relocation to London if the Chargers pursue it.

London has the fanbase for the NFL and a ready-made stadium. Just no franchise yet, but might that change?@VinnyBonsignore has learned, from league sources, that the possibility of the Chargers moving to London has been broached among league personnel. https://t.co/U2H7bVZgs0

Not just that, but if The Chargers do move to London The Houston Texas would relocate to the AFC West while The Chargers presumably would take over the AFC South spot (hey Jacksonville can still go to London every year).

Per this story, if the Chargers were to move to London, the #Texans might move to the AFC West: https://t.co/mz9hR2UDMG pic.twitter.com/aP9Dj6eWut

I got to say, I love this idea. Look, if you have ever been to London (I have, humble brag) they are ready for some NFL football. They love the game, they would have a passionate and intense fan base and really with travel being easier these days it would easily work. I say let’s do it. I guess let’s wait for Phil Rivers to retire though because he has like 9 kids and reloacting all of them would be sort of an issue.