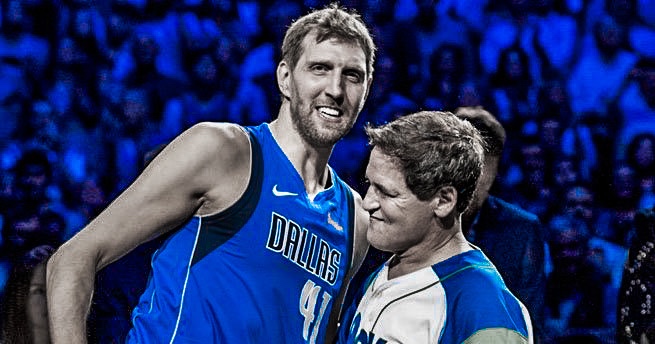 Dirk Nowitzki is and always will be a legend in Dallas and the Mavericks are making it known. Dallas Mavericks owner, Mark cuban, met with Dirk this week to discuss his jersey retirement night, but also a statue outside of the stadium. A statue is rare, but something many would agree that is much deserved for Dirk in Dallas.

It’s unlikely either will happen this season. Cuban estimates it could take at least a year to plan and build what he’s promised will be “the biggest, most badass statue ever” of Nowitzki, who has already been consulted on some of the designs.

“He had seen some that he didn’t like, and he told me about those,” Cuban said. “I wanted to see the stuff he didn’t like.”It’s going to take time. I’ve got to get him some different artists, and I’ve gone and looked at some.” In the meantime, the Mavs will pay tribute to Nowitzki with a new court design featuring his silhouette at each end – an idea hatched by Cuban.

With the 2k20 release I can finally share the surprise element of the new Mavs home court, a tribute to the GOAT @swish41 replacing the secondary logo. pic.twitter.com/iqBPwZS7Uy