Kevin Durant is a complex guy. And KD hasn’t talked much since leaving The Golden State Warriors to sign with The Brooklyn Nets but he did a piece with The Wall Street Journal where he discussed multiple things:

"SOME DAYS I HATE THE NBA," Kevin Durant says wearily.

Take it away, NBA Twitter!https://t.co/xuRWyAbC65

Let’s start with his experience after leaving The Oklahoma City Thunder to join The Warriors. Including that he wanted to eventually return to OKC to finish his career but was turned off by the fans burning his jersey and one fan even taking an assault rifle to his jersey. 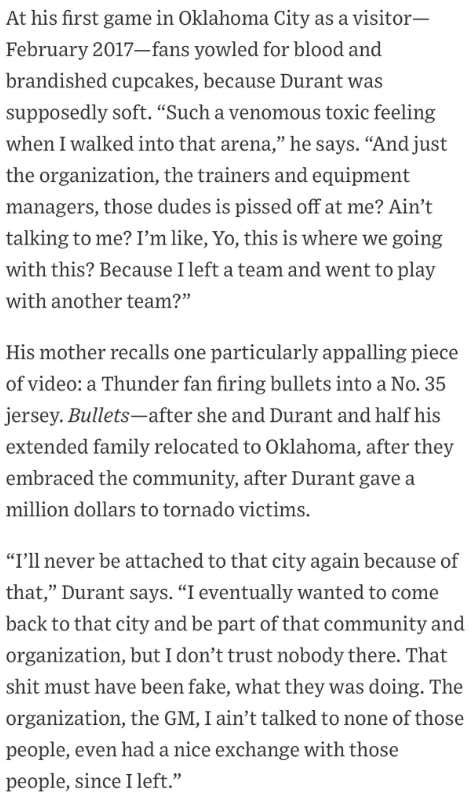 It appears some #FourthofJuly barbecues in Oklahoma got a new addition to the menu.

Those are the moments that cemented Kevin Durant never wanting to return. To be fair, if I saw someone burning my name, or shooting a shirt with my name or face on it. I wouldn’t want to go there either. And as far as The Golden State Warriors went? He just felt like he didn’t fit in:

KD on “never being one of those guys (Steph/Klay/Dray/Andre” in the Bay pic.twitter.com/ubKzZ3F2N7

It’s a pretty good read and a long article. But those are the two main things we took out of it. Kind of weird that he couldn’t fit in with what might be the best organization in the league but whatever. Two championships and three straight final appearance. Sure, KD might think he fit in, but it sure did work.