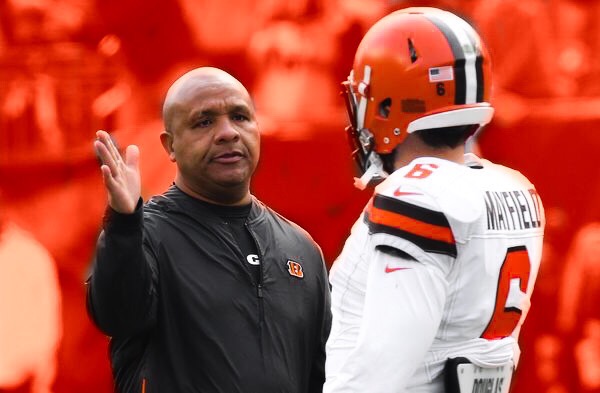 Tough times came into the Hue Jackson’s life last year, not only on the football field, but also off. As we saw on HBO Hard Knocks last year, he lost his mother and his brother in an extremely short span of time. After all that, he also lost his job and went through it all:

After losing two family members and being fired from two teams in less than a year, Hue Jackson opens up to @GregBishopSI about his time with the Browns, his relationship with Baker Mayfield, and more: https://t.co/vJsI99azER pic.twitter.com/76lkni89zS

Source (theScore) – Hue Jackson says he became depressed after his firing from the Cleveland Browns last season. However, he credits close friend Marvin Lewis for helping him rebound by lending him a spot on the Cincinnati Bengals’ staff.

“I needed that jolt,” Jackson told Greg Bishop of The MMQB. “(Marvin) helped me. What he did wasn’t about football. I don’t know what would have happened had he not.”

Jackson was axed by the Browns following a 2-5-1 start to the 2018 campaign. He posted a 1-31 record the previous two seasons. Two weeks after Jackson was let go by Cleveland, he was named as an assistant to Lewis on the Bengals.

Hue Jackson sells suburban Cleveland house at a loss, takes one final L on his way out of town … he's moving back to Cincinnati https://t.co/FV3hVU5vEv pic.twitter.com/PNwu6gyTTc

The 53-year-old Jackson said he felt like a failure once the Browns terminated him. He resisted watching TV to avoid hearing criticism over his Browns tenure, only ate meals when his wife delivered them, and rebuffed friends who tried to remind him about his successes in other areas of life.

“Football is what made me feel like who I am,” he said. “People might say that’s too far. No, it’s not. You can’t be good at what you do if you don’t pour all of yourself into it.”

Jackson also lost his brother and mother in July 2018, just a few months before he lost his job.

The Bengals’ new coaching regime didn’t retain Jackson in the offseason, and he’s not affiliated with an NFL team as the 2019 regular season approaches.