I know I know, you read this title and think “here we go again…” for the fifth straight year, someone comes in and tries to give their ridiculous prediction of some team beating the Golden State Warriors. Luckily for me, someone did do it once, and that was LeBron James and the Cleveland Cavaliers. Luckily for you, I am not completely claiming that the Toronto Raptors have a chance to win. The 2019 NBA Finals is one of the most interesting finals we’ve had in a long time; because of all the different factors there are, the Raptors might ‘sort of, kind of,’ have a shot at dethroning the Warriors.

Let’s start with the obvious. In 2016, Kevin Durant and the Oklahoma City Thunder blew a 3-1 lead to the Warriors in the Western Conference Finals. The Warriors went on to also blow a 3-1 lead as well, to LeBron James and the Cavaliers (of course I had to bring this up). Let’s not forget that the Warriors were coming off of a 73-9, recording breaking season. That happened to be the last game we’d ever see Durant in a Thunder uniform and the NBAs second best player joined the greatest team of all-time… since then, every NBA team in their sight has been destroyed as they have now cruised into their 5th straight finals appearance and going for their 3rd straight title.

3 years ago today… KD faced off in a Game 7 against the Warriors… Oh, how things change. pic.twitter.com/zeTTYmt9qw

I promise this was not to just bash on Durant (although it was bullshit), there is more context behind this. He is the wildcard of the NBA Finals, and the main reason I give the Raptors a chance at winning this thing. Durant is a match-up disaster for every single player in the NBA, even 2-time defensive player of the year, Kawhi Leonard. On top of that, Durant has turned himself into a highly efficient defensive player as well. Durant being out completely changes the balance of the series, and as of right now, Durant is most likely out both games 1 and 2… in Toronto. With Durant coming back in this series, I am taking the Warriors in 6, but with him out, I will take the Raptors in 7.

But wait, there’s more — I forgot to mention that the Warriors were missing TWO OF THEIR FIVE ALL-STAR talents. Now, I know many will argue that DeMarcus Cousins hasn’t played enough this year, but let’s not forget too quickly. Cousins was averaging 25.2PPG and 12.9REB before tearing his Achilles a year ago. He was playing at an MVP level and helping take Anthony Davis and the Pelicans to new level. Well guess what? He is back for game 1 officially, which just gladly spices things up once again.

Warriors’ DeMarcus Cousin is officially active for Game 1 of the NBA Finals tonight ? (via @ShamsCharania) pic.twitter.com/lQoaDk3zhN

I don’t want to get ahead of myself quite yet though, Cousins could be slow and out of shape. Plus, this game is in Toronto and it’s not the easiest environment to play in, so this will be interesting.

Here’s the deal; Kawhi Leonard is playing like he is the best player in the world right now, and I love it. Kyle Lowry is weirdly good in the playoffs for once. Marc Gasol has experience. Serge Ibaka shows up when he is needed. Pascal Siakam is young but can have great games at home.

Home, one of the most important words this series, Toronto has home court advantage as of today, and that can make all the difference. The last time we saw the Warriors in trouble was game 7 on the road in Houston last year, and that was with Chris Paul missing the final two games of the series… So maybe for once, the Warriors regular season record did matter?

All in all, I still haven’t mentioned Steph Curry, the best, and most experienced player in this series, and he’s why the Warriors should have the advantage. I know it’s crazy to bet against them, but I truly do think the Raptors ‘sorta of, kind of,’ have a chance and oddly enough some computer science thinks so too. 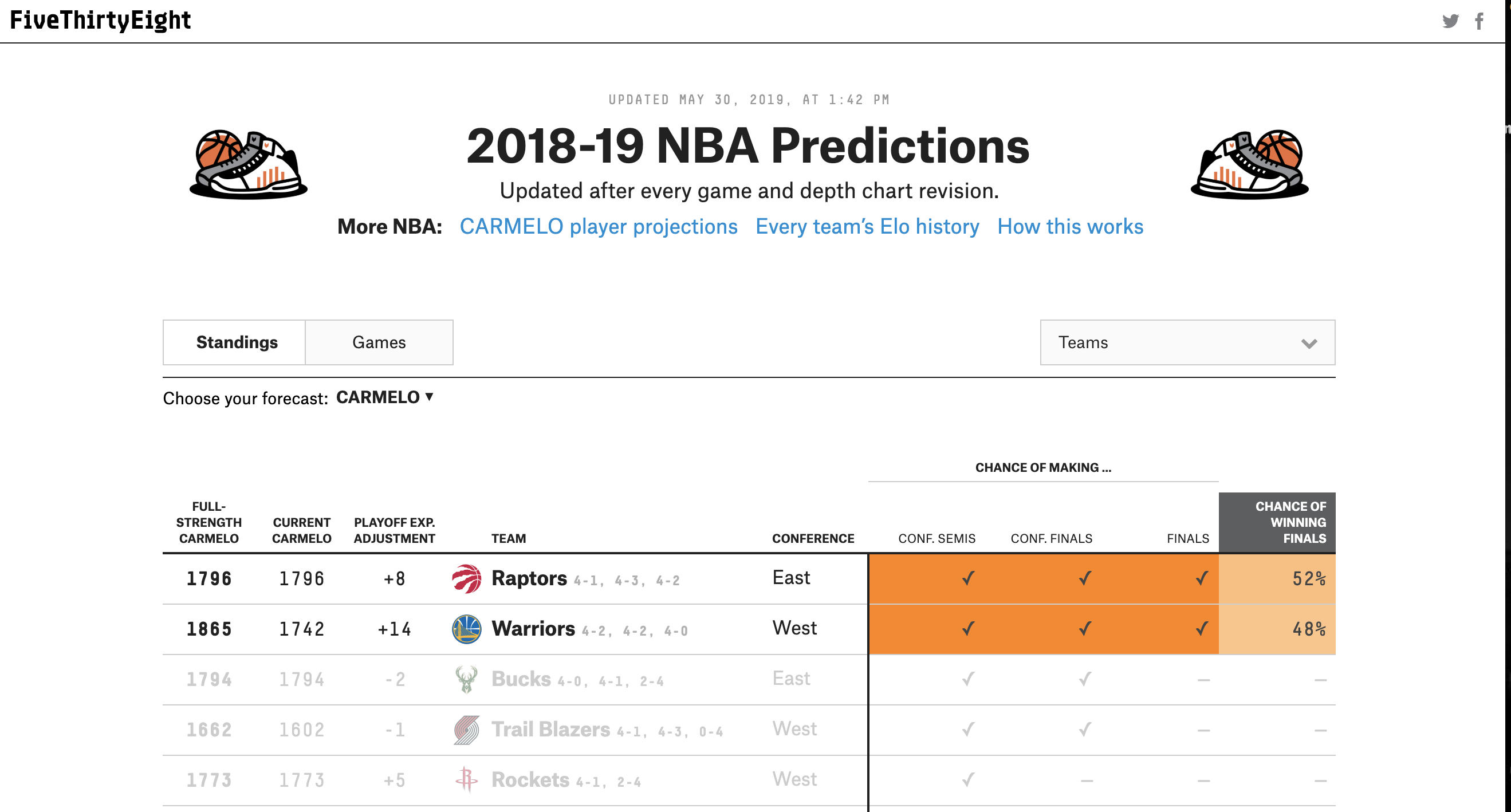 Well at least science is slightly on my side.