Alright. Ok maybe, LeBron James isn’t begging quiet yet. But let the recruiting period begin. Who does LeBron have on his mind? Well Kawhi Leonard and Jimmy Butler. Last night Brian Windhorst went on PTI and explained the situation:

From what I understand, he has already begun the recruiting process. I’ve heard he has had contact with Kawhi Leonard. I’ve heard he has had contact with Jimmy Butler. There is no tampering enforcement by players. … The thing about it is, I don’t know if texts and calls and maybe a dinner with LeBron is enough for the Lakers to overcome the hurdles that they’re going to have. 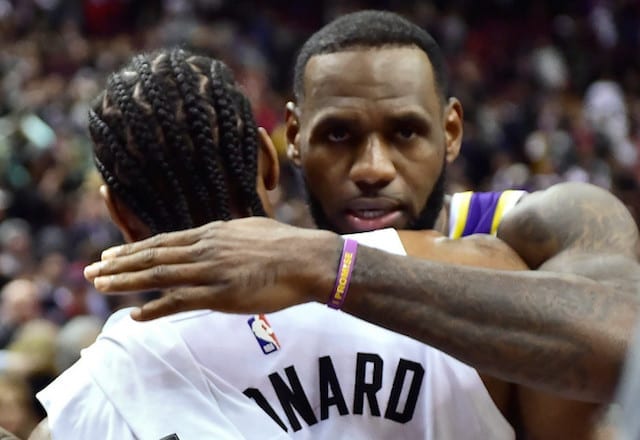 Umm. Maybe, I don’t understand tampering. But a guy who is still playing in the playoffs and is one game away from the NBA finals.. maybe he shouldn’t be reaching out to. I know, there are different tampering rules for players then GMs and owners and what not. But man, talk about annoying. Kawhi is out here trying to win a championship and LeBron is texting telling him to ditch Canada and come to Los Angeles. Whatever. Stephen A Smith also added some context to the situation and what he has heard:

“He feels very wronged by the Lakers. When you look at LAL right now you got alot to be concerned about…I heard a few days ago when Raptors were in Philly that LeBron was there & he was seen talking to Kawhi. He’s is recruiting.“ pic.twitter.com/zxbhN9KbjR

“It’s not a forgone conclusion that Kawhi may want to indeed play on the Lakers with LeBron James. But where does LeBron go from here? You gotta ask yourself what the fall out is going to be?“ pic.twitter.com/kED7rW3wnc

Jimmy Butler he’s also recruiting which is a big deal, but defintely not as big of a deal as Kawhi. Hopefully for LeBron has an easier time recruiting players to come play in Los Angeles on The Lakers then he has had on getting people to come on Space Jam.

According to Brian Windhorst, LeBron James is having trouble convincing players to join him in Space Jam 2 ? pic.twitter.com/WUrJcoeSy7