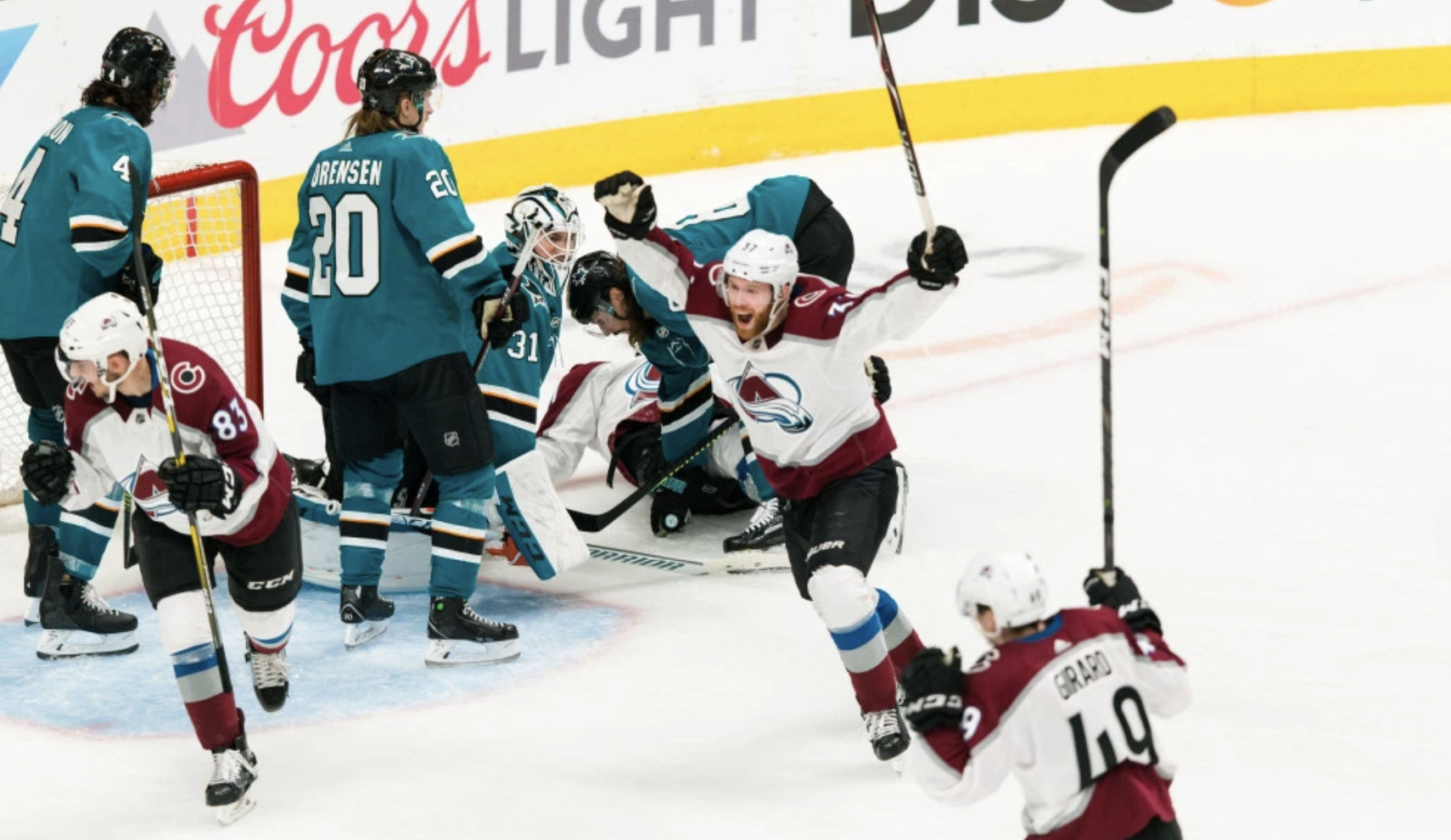 The NHL Playoffs have been a wild ride as always, and we are ready to give you the ultimate guide to whats coming next:

The Avalanche made quick work of the number one seed of the West and the Sharks made excellent comebacks against the West’s defending champions. This should be a high scoring affair.

The Sharks were down 3-0, and with the season on the line and 10 minutes on the clock, they got themselves together and scored 4 goals, went into overtime, and won. This team is battle-tested, and possess 4 of the top 10 point leaders of the NHL playoffs thus far. They won’t win with goaltending and they are fine with that.

GRUUUUUUUUbauer played out of his mind in the series against the flames excluding game one. Mikko Rantanen ranaway with this series and the Avs flipped the narrative that bugged them through overtimes in the regular season with victories in overtime through the series before running away with it.

The Avs have the definite head to head advantage at goalie should Gru continue his success. The Sharks have the edge in experience with the Avs being one of the youngest teams in the NHL. I bet the Avs continue to surprise everyone in the west.

Behind brilliant play from their rookie goalkeeper, the Blues have kept rolling and the Stars stepped up and defeated the favorited Preds.

Jaden Schwartz has been a rock for the Blues through one series with a hat trick. Binnington has continued to be excellent and the Blues just outclassed the Jets in every facet. The Blues finished as the sixth best defense in the playoffs allowing 16 goals to the Jets and will hope to hold the Stars’ line down.

The Stars owned the regular season battle, but this Blues team feels very different from Blues teams of the past and will continue their roll to the WCF.

The Blue Jackets just completed arguably the biggest upset in NHL history, and the Bruins held off their playoff rival Maple Leafs after almost really dropping the ball to them.

The Bruins scored 23 goals through 7 games including 5 in a statement beatdown of Toronto in game 7. The Bruins are serious about fighting for the cup now with the Lightning out of the picture, it’s anyone’s game. Chara has proved to still be effective in his elder age with one of the best plus-minus through the playoffs.

The Blue Jackets didn’t just kick the Lightning’s ass, they dominated in every facet against one of the best teams in NHL history. They were effective on PowerPlay over 35% of the time and lead teams in goals per game with 4 per game.

I am completely surprised just as everyone for what happened to the Lightning and the utter dominance the Blue Jackets showed in the series. I am however, skeptical of the Bruins also being caught by surprise once again.

The Islanders finally have their opponent after waiting since April 16th for whom it may be. While the Islanders swept the Penguins right off of their feet, the Canes just came back from being down to the defending champs to swiping a victory in double overtime.

The Islanders after having needed overtime for game one against the Penguins, did cruise on to win the series with a +7 goal differential following game 1. Robin Lehner played lights out in the series and leads all playoff goalies with a .956 save percentage (astronomical compared to his already impressive .930 from the regular season) and has a playoff leading GAA of 1.47. The Islanders are also 2nd in the playoffs in Penalty Kill which is very handy against a team that was especially weak on Power Play opportunities so far this postseason.

The Hurricanes will test the Islanders work in the net with plenty of shots on goal as they lead all teams in Shots on goal through the postseason. The Hurricanes are also plenty battle tested after beating the defending cup champs in game 7 to advance. Slavin has proved masterful in setting up the play with almost double digit assists through one series.

Offense vs defense in this upcoming series is the tale of the tape. The Hurricanes did just get through a whole series and the Islanders are well rested.