No LeBron James, upsets have already happened, and some costly injuries have occurred. As always the NBA Playoffs are a wild place. Kodey Stauffer gives his all-out predictions for the first round of the Western and Eastern playoffs.

The Warriors have had up and downs but still remain the Gold(en) standard of the NBA with a stacked lineup and the Clippers are a well-coached unit under Doc Rivers with a lot of role players playing well together.

The Warriors were in trouble of not securing the no.1 seed until they beat the Nuggets down the final stretch of games. The big storyline in the NBA has been Steph Curry shooting way better with contacts in. He improved to 48.7 percent from the arc compared to the 43.8 he was shooting up until March 16th this year. This along with KD, Klay, Boogie, and Draymond still makes the Warriors the team to beat. 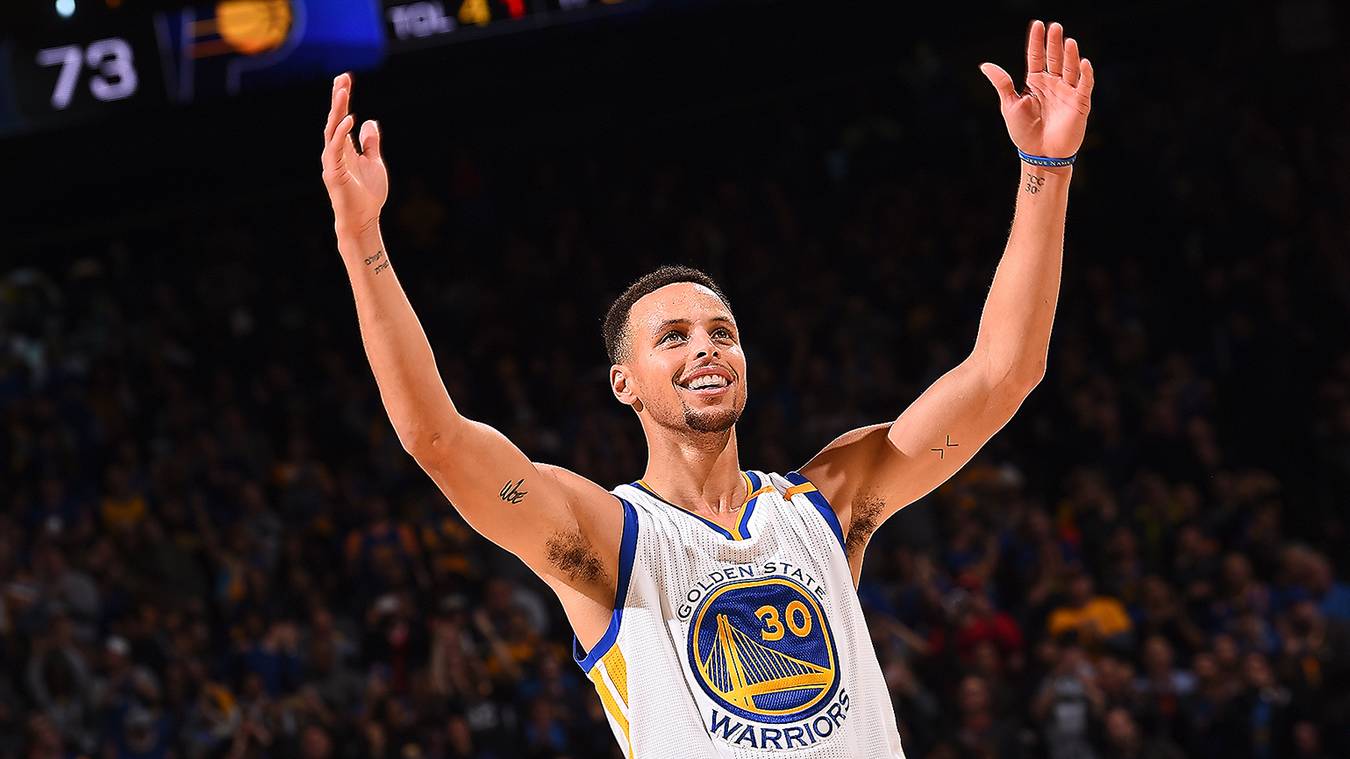 Only one player on the Clippers averaged 20PPG this season and that was Lou Williams. The Clippers don’t need to rely on one man to score however because they were still top 5 in the league with 115.1 points per game in the regular season. The Clippers play stingy defense anchored by Patrick Beverly and rookie Shai Gilgeous-Alexander and will have to play the best ball they’ve played all season if they want to win a game this series.

As much as I want the Clippers to win, I just don’t see how it’s possible for this team to not get swept by Golden State, much less win the series.

The Nuggets have a handful of players getting a first taste of the playoffs against Popovich and the Spurs who know nothing but the playoffs. The Nuggets were a surprise team this year registering one of the best years in franchise history while the Spurs continued to get quality production from role players en route another postseason appearance.

The Nuggets went wild spearheaded by All-Star Nikola Jokic who was the first center since Wilt Chamberlain to have over 500 assists in a season. This coupled with his 20-10 average has made him the centerfold in this offense that takes turns in who pops off from one night to the next. Any night it can be Will Barton off of the bench, Jamal Murray lighting it up, Gary Harris having outlandish layups, or the opposing team not being able to guard Jokic at the arc. The Nuggets are a swiss-army knife of offense and good defense.

The Spurs have reinvigorated their defensive and offensive playstyle with a core of DeRozan and LaMarcus Aldridge. The mid-range has become the strength of this San Antonio offense with DeRozan and Aldridge being most comfortable shooting from that spot on the court. The Spurs also have a Colorado kid lighting it up in Derrick White who has filled in for Dejounte Murray extremely well providing highlight dunks every once in a while.

The experience gap between these 2 teams seems rather high but that’s where the signing of Paul Millsap is as important as ever. These teams both lost less than 10 times at home but seeing that the Nuggets have home-court, I feel they pull it off and win a playoff series for the first time in nearly a decade in Denver.

The streaky Thunder head to Portland for the majority of the series and the Trail Blazers are hungry after having got swept last season by the Pelicans. Dame Lillard and Westbrook duels day in and day out for a whole playoff series is must watch television so get your popcorn ready.

The Blazers have been a surprise at the 3-seed and have a good backcourt in CJ McCollum and Dame Lillard (25.8 PPG and 6.9 AST). Lillard was a top 10 scorer in the league which spearheaded the no. 3 ranked offense in the league. They will miss Nurkic and his career-year whilst in the playoffs and will seek for a matchup on Steven Adams. 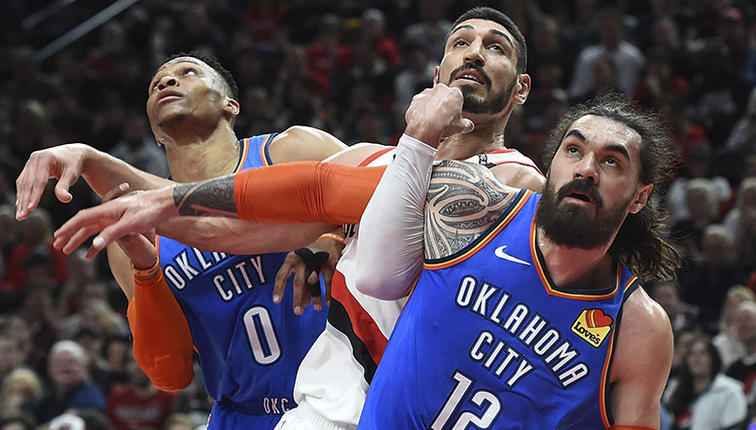 OKC got a great year out of Paul George but he has been battling a shoulder injury for a couple weeks. Russel Westbrook has averaged a triple double one more time which can be seen in the Thunder’s lead in offensive rebounds per game at 12.6. OKC also thrives off of a great defense that led the league in steals per game which went nicely with their second in the league in points off turnovers.

This will probably be the most competitive series out of all of them in the NBA playoffs, but the Trail Blazers turn the ball over a lot and the Thunder will absolutely feed off of those turnovers and Adams will get a career series with no one to fight him defensively.

The reigning MVP (maybe even repeat MVP) gets ready for a really hot Jazz team that hopes to continue the trend of success of 5 seeds against 4 seeds where the 5 seed has won 7 of the last nine matchups. These teams tied in the regular season and whoever wins this playoff series will have the last laugh.

The Rockets have James Harden who is looking at the possibility of scoring over 3,000 points this year following the postseason. Averaging 36.1 points per game, Harden welcomes back a healthy squad with Capela and Paul back in the fold which makes this team a competitor with the Warriors. 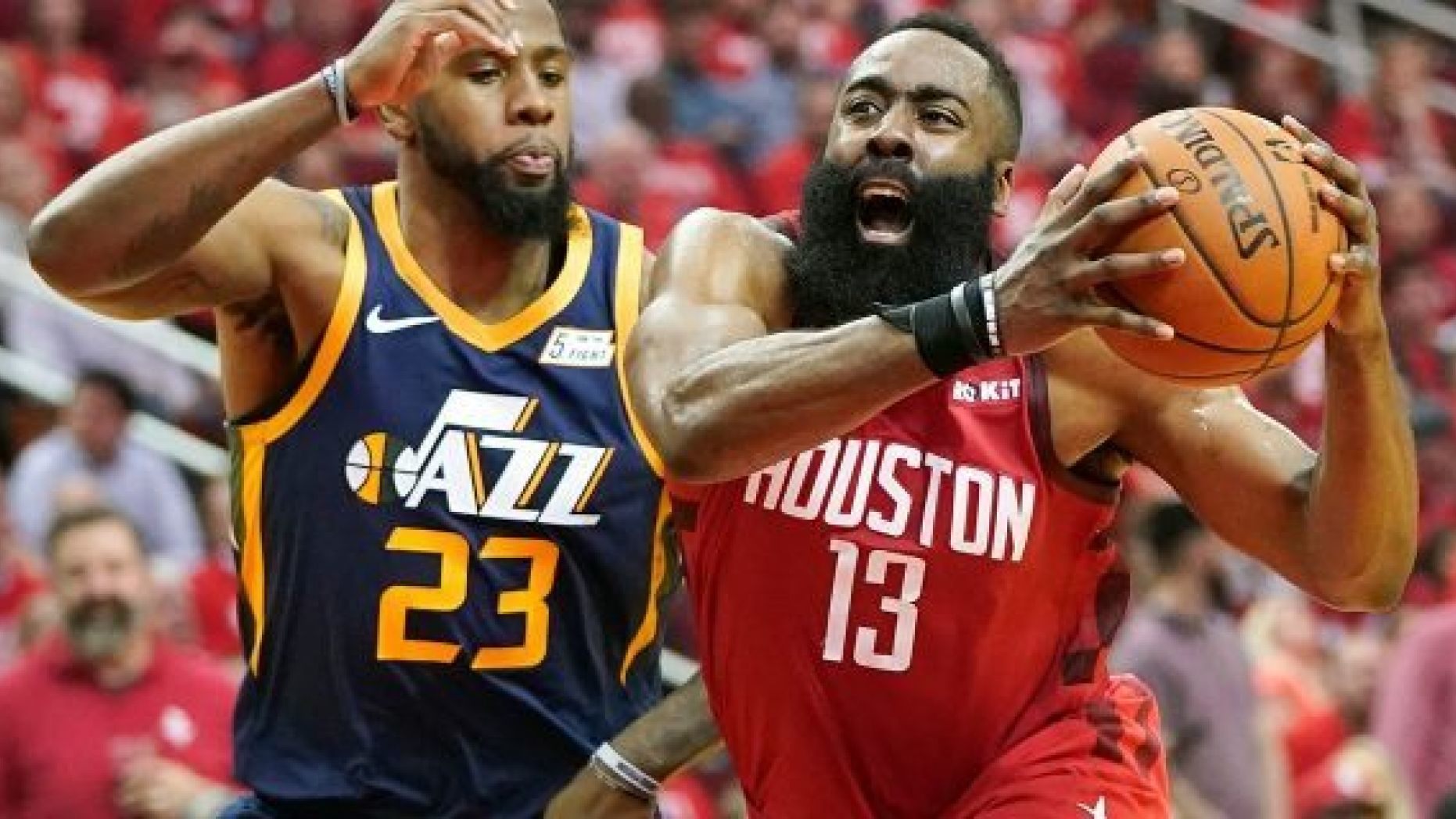 The Jazz sport a strong defense with Gobert protecting the paint and helping the Jazz be third in the league in blocks per game. The Rockets really don’t have anyone to match up with Donovan Mitchell on their defense who can beat you from anywhere on the court and this Jazz team has picked up their pace down the stretch on offense.

The Rockets will probably end up in the Western Conference finals and the Jazz will not be able to stop or even slow down Harden (especially if Rubio is guarding him) and the Chef will take Houston to the next round.

The playoffs are coming back to Detroit! Too bad that it’s the Bucks and that the Bucks are on an absolute tear. MVP-Candidate Giannis Antetokuonmpo has been on another level this year and has slightly improved his 3-ball. Mike Budenholzer’s return to the NBA has been more successful than anyone could have imagined and looks to be coach of the year. 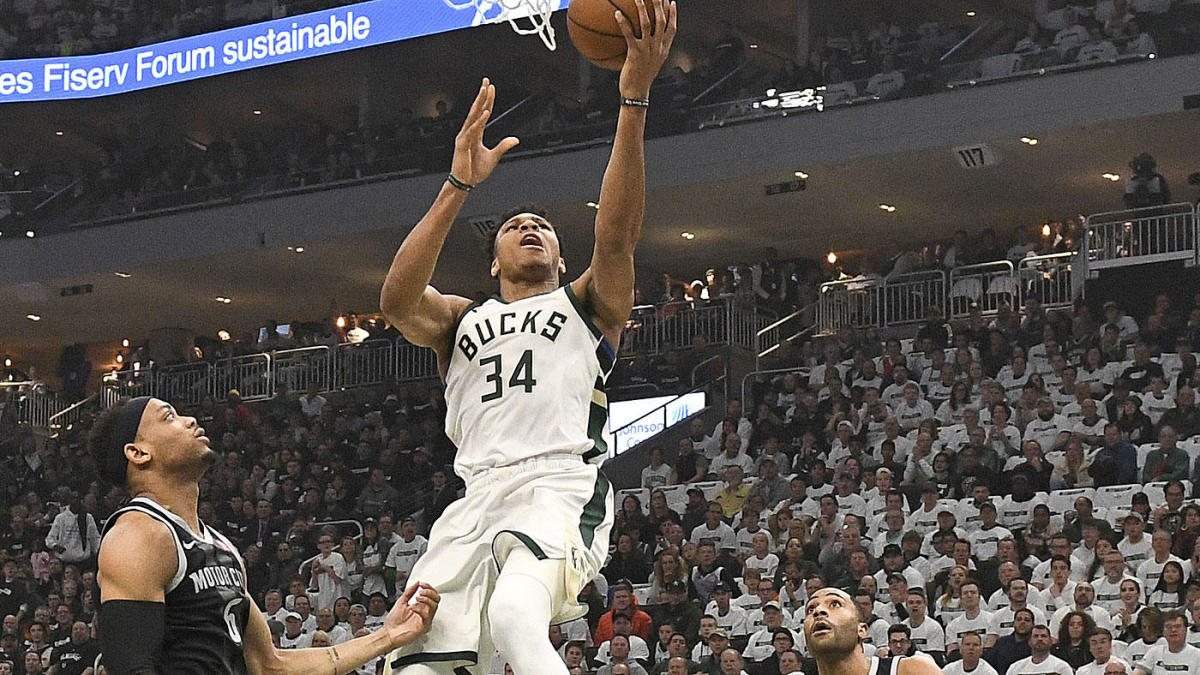 Blake Griffin has put in absolute work in bringing the Pistons into the playoff fold as he was the leader in PPG for a time at the beginning of the season and finishing 12th with 24.5 PPG. Outside of that the Pistons are mismatched in every facet of the word.

Not much analysis needed for this especially if the Bucks get more second chance points than the Pistons (which they probably will) these games will follow the same trajectory of the regular season matchups and end up in blowouts.

Following last year where the Raptors were a no. 1 seed before getting swept by LeBron, the Raptors hope Kawhi and new head coach Nick Nurse will be the secret to making it to a championship (or at the very least an Eastern Conference Finals). The Raptors did win the second most games this year and only lost one game in April. But which Kyle Lowry will show up is a huge question that has yet to be answered. 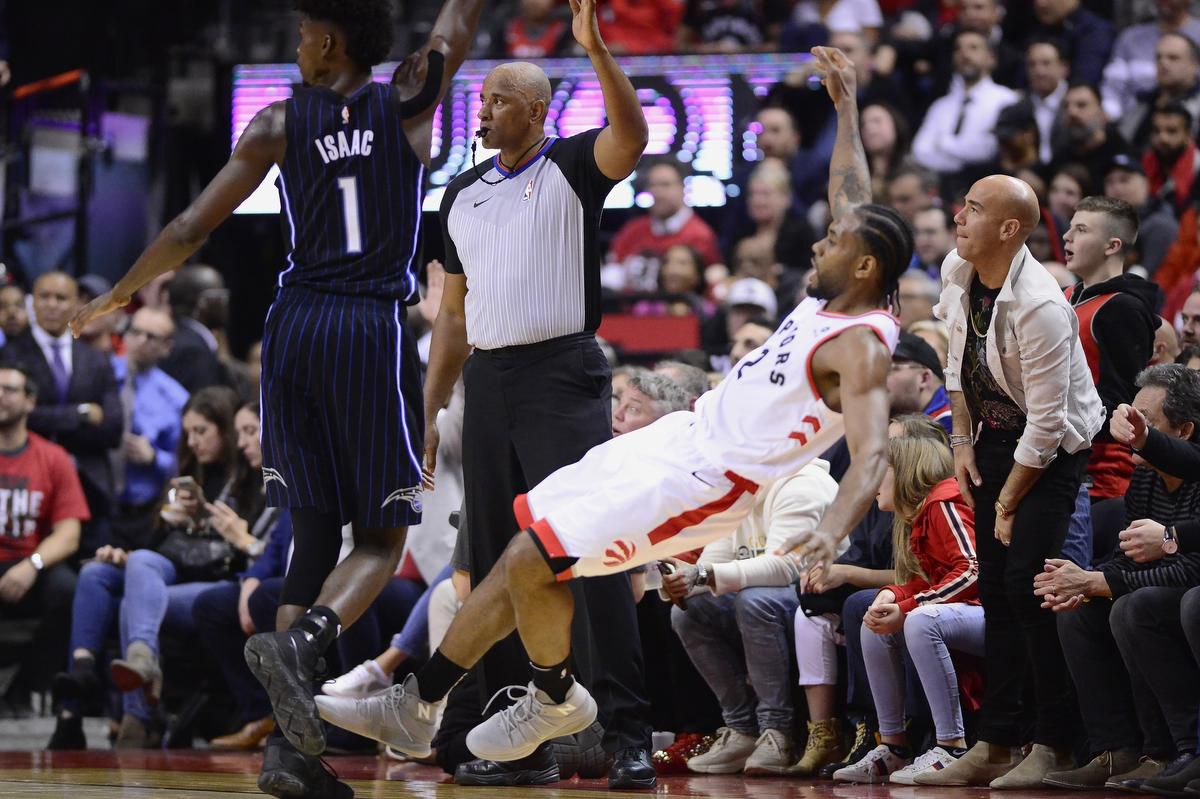 The Magic are fairly well equipped to compete with the Raptors on size alone with multiple defenders to challenge Kawhi. The Magic over the last two months actually have the number one defense and have already won big in Toronto.

Kyle Lowry has only scored above 20 PPG in one playoff run in his entire career and we have seen him only put up 7 points before and has not shown himself as a star playoff player. That’s where Kawhi takes some of the slack off of Lowry’s back and helps the Raptors advance.

The 76ers come in looking to make a run at a championship which they proved at the trade deadline with the acquisition of Tobias Harris. The Nets have returned to the playoffs behind an insane scoring threat in D’Angelo Russell.

The 76ers were top 5 in categories of Points per game, rebounds per game, and assists per game and are a legitimate contender with the starting 5 of Ben Simmons, J.J. Reddick, Jimmy Butler, Tobias Harris, and their superstar Joel Embiid. Embiid is always an absolute monster when he’s healthy and if he can remain healthy the 76ers have a legitimate shot at running the table. 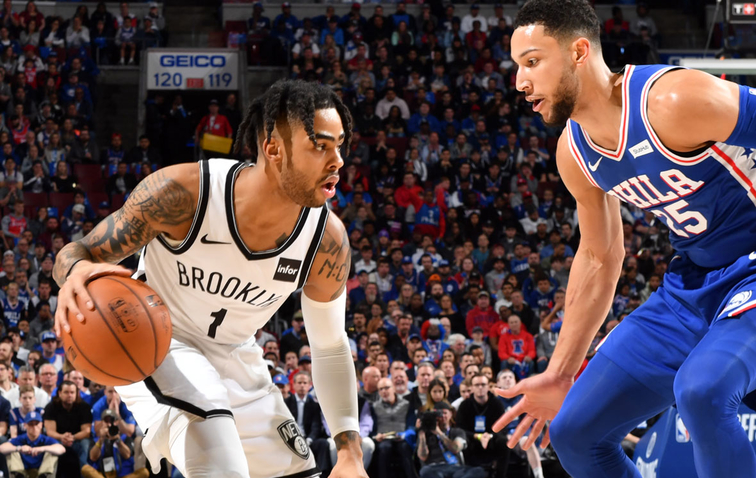 The Nets are top 5 in 3-pointers made per game with 12.8 per game and have Joe Harris who hit 47.4%(!) of his 3 pointers. The Nets will also hope to continue their success with one of the highest isolation rates in the NBA and one of the best iso scorers in the NBA in Russell.

The Nets do have some potential to give Philly a run for their money but if there is any other point guard who I think can cover Russell and work through screens it’s Ben Simmons. The 76ers are also one of the best in the league in limiting 3’s and that should cause a problem for the Nets that they may no be able to overcome.

The Jekyll and Hyde Celtics will identify what type of team they are with a favorable matchup against the Pacers. The Pacers are hoping to find the Celtics who miss shots and blow off assignments on defense and hope not to run into the actual talent-level of the Celtics.

These teams have some of the best benches in the NBA and Boston’s second unit has a lot of star talent with Rozier, Jaylen, Hayward, Ojeleye, and Baynes having the potential to be a starting unit for a handful of teams in the NBA. The bench unit averages 39.7 PPG on 44% shooting and will be huge down the stretch of the playoffs. 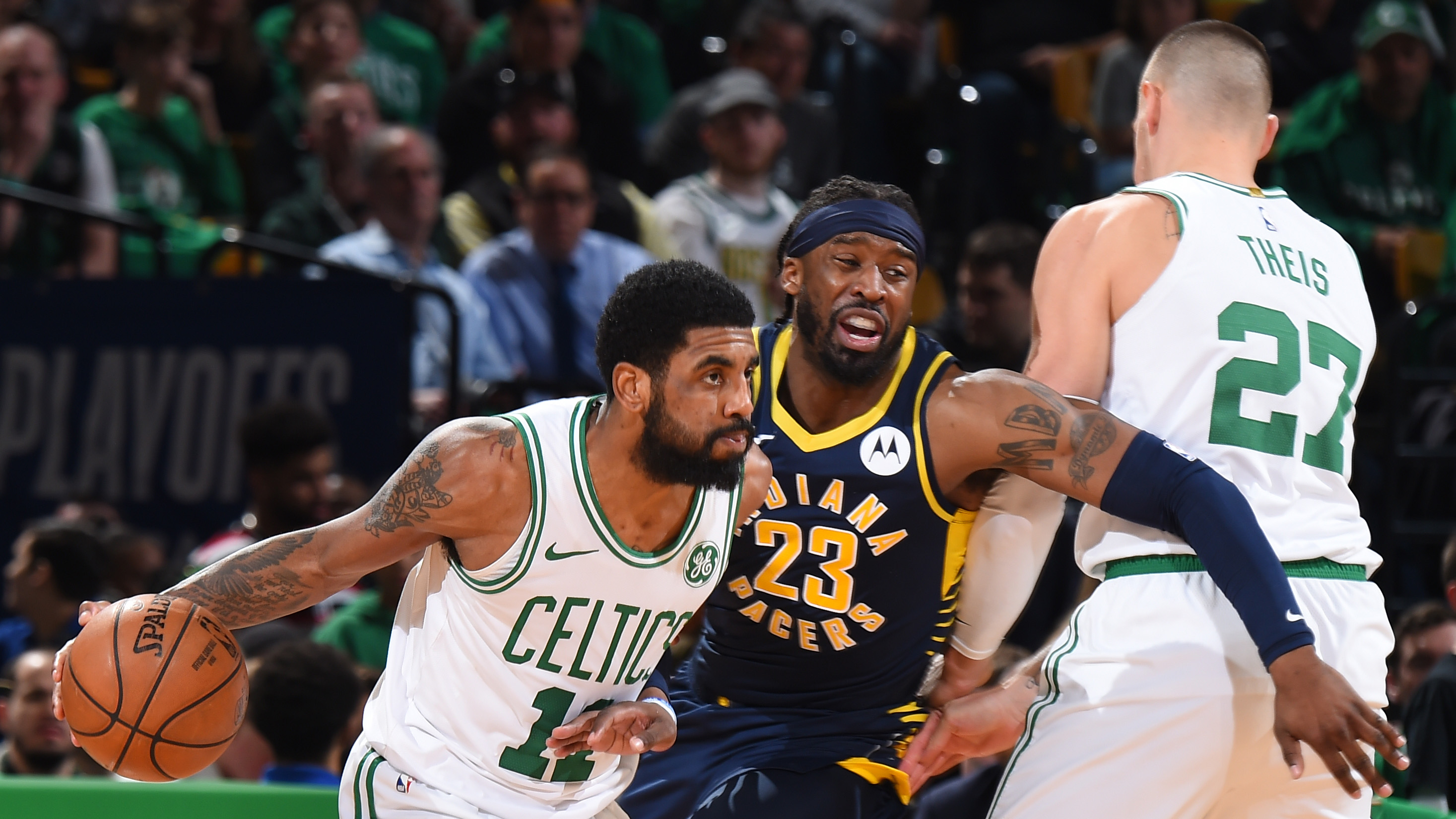 The Pacers had the no. 1 ranked defense through the regular season only allowing 104.7 PPG behind 2.69 blocks per game from Myles Turner and also have a potential 6th man of the year candidate Domantas Sabonis almost averaging a double-double off the bench (and that’s having to share minutes with Turner).

Ultimately, both of these teams are deep, but the Celtics are deeper and Kyrie being healthy is crucial for the Celtics down the stretch in games where the Pacers will be missing Oladipo the most in now in the playoffs.